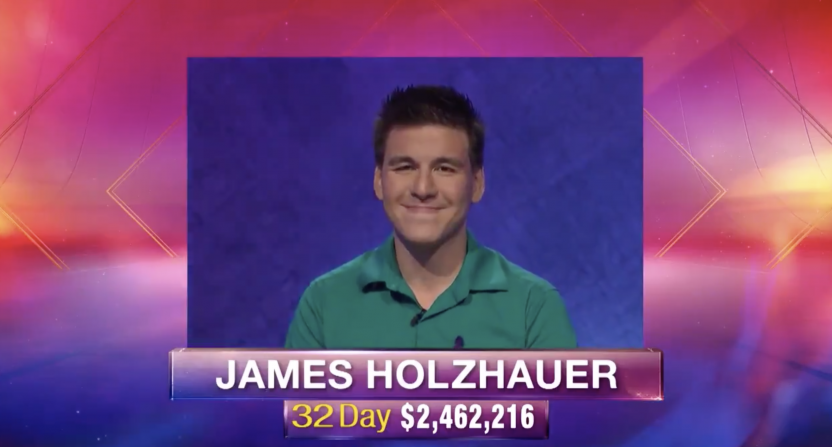 Footage of Holzhauer’s loss was leaked ahead of time, and once the cat was out of the bag, Holzhauer himself poked fun by mentioning Drake. While people may have been pissed about Jeopardy! spoilers, that may have actually helped ratings for Holzhauer’s last episode.

According to Fox Sports EVP Michael Mulvihill, Jeopardy! earned a 10.1 overnight rating Monday night, the highest in Holzhauer’s run, even in spite of the leak. For reference, Game 2 of the NBA Finals got a 10.2 overnight rating Sunday.

10.1 overnight rating for Jeopardy yesterday as the epic @James_Holzhauer streak came to a stunning end. The 10.1 is the highest overnight of James’s 33 show run.

Everything we have been taught to believe is that spoilers keep people from watching, but Jeopardy! seems to be spoiler proof. There could be a few reasons for that. The event of watching an achievement like this is something non-Jeopardy! viewers will tune in for. While the element of surprise is gone, letting the general public know that someone is set to win big on a game show is still guaranteed to get a big number.

In addition, since Jeopardy! and game shows in general attract an older audience, many of them aren’t on social media anyway to be spoiled. My dad watches Jeopardy! and he was none the wiser because he isn’t on Twitter. More than likely, he’s not the only one.

We have a new champion! Congratulations, Emma Boettcher!

After all this, the big winners (along with Holzhauer) have to be the affiliates who air Jeopardy! across the country. Not only did this run get them big ratings, it got them big ratings during May sweeps.

As for Holzhauer, he’s planning to throw a party for his four-year-old daughter and inevitably be invited back for future champion versions of Jeopardy!