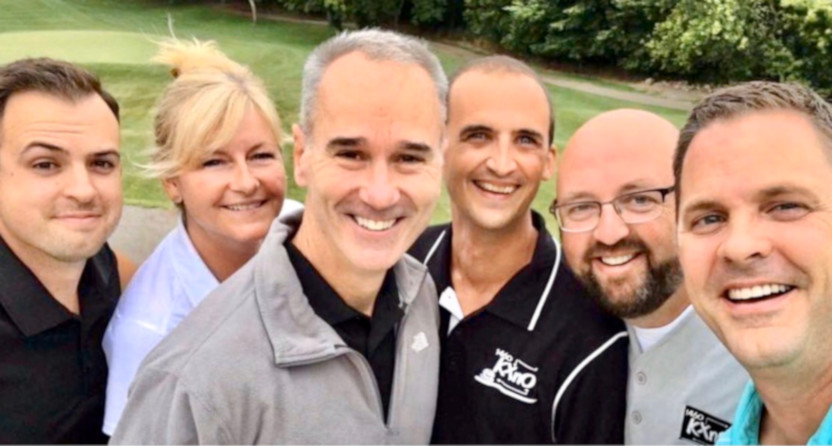 Layoffs happen far too often in the media world these days, but what’s much rarer is seeing a company take so much heat over layoffs that they reverse their decision. On Tuesday, as part of the wider iHeartMedia layoffs affecting radio stations across the U.S., Des Moines sports station 1460 KXNO parted ways with six employees:  Travis Justice and Heather Burnside and producer Sean Roberts of The Morning Rush, Ross Peterson and Chris Williams of the drive-time show The Sports Fanatics, and KXNO program director Andrew Downs, who was also a producer and co-host on the afternoon The Murph and Andy Show (one of the two remaining local shows that wasn’t cancelled).

But those cuts led to incredible local backlash, and to Murph and Andy (Keith Murphy and Andy Fales) deciding not to do their show Tuesday or Wednesday after the cuts.

We have opted to not do the Murph & Andy Show today. Thank you for your interest and understanding.

We have not made a decision on future shows, but today more than ever, don’t take the opportunity for granted. pic.twitter.com/ANKRqlbcKR

We need to be sure we can deliver version of what you expect, and we demand. Right now, we can’t.

It’s only a radio show-we get that-but we really care, and we appreciate that many of you do too.

Thank you for your understanding and support. Sincerely.

On Thursday, KXNO reversed course, bringing back all the people they cut:

Power to the people. ✊? Thank you. You made this happen.

Here’s more on that reversal from Matthew Bain of The Des Moines Register:

“I heard you. I made a mistake,” KXnO general manager Joel McCrea said on air Thursday. “They are all coming back (next) Tuesday morning at 6.”

…”It’s been shocking all around,” Downs told the Register after the news was announced Thursday. “The initial thing was shocking. The outpouring of love and support from everywhere, the number of texts and calls and emails and my Twitter. I’ve had to charge my phone more than I ever have. Twitter and Facebook, people from all over reaching out. That’s been the coolest thing — just the overwhelming love and support from listeners and advertisers.”

…”The people made this happen. It’s really rare these days for anyone, let alone a big media company, to say, ‘We got it wrong,'” Murphy said. ” … I’m sure there’s an example, but I can’t off the top of my head think of when something like this has happened. I think that’s why people seem so overjoyed about it. Because they made a difference in the best possible way.”

And here’s a small selection of that outpouring of support that was seen on Twitter after the cuts:

Some longer form thoughts on the @1460kxno layoffs from my Facebook page pic.twitter.com/9zblIn3kGr

iHeartMedia just completely gutted one of the last truly local sports radio stations in Des Moines. I really enjoyed all the local programming that KXNO ran and found it so much more enjoyable than all the national stuff ran on other stations. Huge loss for the metro. https://t.co/hi1D9GIGWT

I thought KXNO was the state's best sports radio. Wonder what happened. https://t.co/k4aQJyESoB

Frustrated and saddened by the KXnO news. Makes no sense to me. Central Iowa lost some great local sports voices today.

It’s incredibly rare to see a company actually reverse course like this after layoffs, but the passion expressed here clearly played a big role. And it’s notable to see how Murphy and Fales decided not to do their show for a couple days after this; that presumably ratcheted up the public pressure on the station as well. And listeners communicating to KXNO that they were only listening because of the local personalities involved was doubtless important too; there are obvious cost savings from just picking up syndicated programming, but if a whole lot of your listeners are saying they’re not going to bother, it may not be worth it. Instead, as noted in the WHO-TV story on this, McCrea managed to get permission from iHeartMedia bosses not just to rehire the cut staffers, but to give the station a big signal boost by adding an FM frequency as well:

KXNO general manager Joel McCrea says he and noticed the angry reaction to the news from thousands of listeners in Iowa and reconsidered his decision to restructure KXNO. He was given permission by iHeartMedia, which owns KXNO and its sister stations in Des Moines, to re-hire the employees, and tells Channel 13 that the shows will not only return next week, but KXNO will also be simulcast from now on on 106.3 FM a 25,000-watt station. This will significantly increase the reach of KXNO’s broadcasts.

So that’s certainly a great outcome for the KXNO staffers involved, and for the fans of the shows in question.