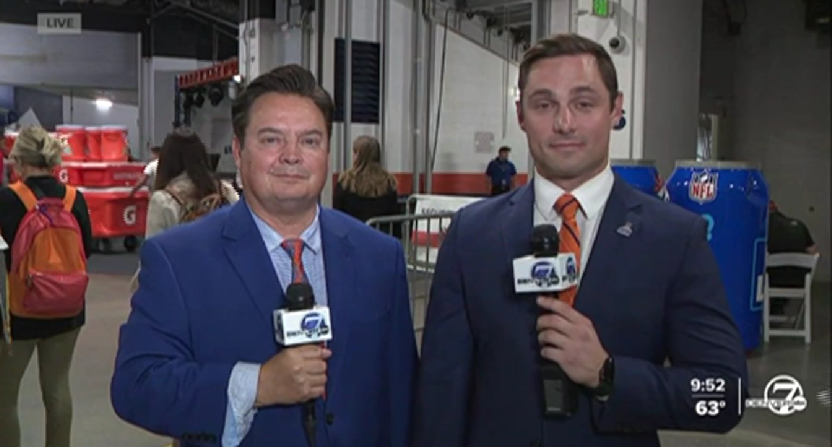 This week’s Indianapolis Colts–Denver Broncos snoozefest (an eventual 12-9 overtime win for the Colts, for those who fell asleep, left before overtime, or chose not to watch at all) on Prime Video’s Thursday Night Football led to a lot of roasting on Twitter. It also even took some roasting from Amazon play-by-play voice Al Michaels and analyst Kirk Herbstreit. And the local sports staff on Denver ABC affiliate KMGH-7 (The Denver Channel) might have been the harshest with their criticisms, especially considering that they were the designated local broadcast affiliate carrying the game.

The KMGH postgame coverage was quite something. It saw sports director Lionel Bienvenu chuckle about how bad the game was in his introduction, mention how Russell Wilson “looked as bad as I’ve ever seen him,” and then throw to sports anchor Nick Rothschild and channel Broncos’ insider Troy Renck (seen at right and left above respectively) on site at Empower Field at Mile High with “What has happened to this team?” And it further escalated from there:

"Troy, I feel the need to just apologize to the viewers. I know we didn't play, we didn't even really run this broadcast, but the fact that you had to watch that? On our air? I feel bad." pic.twitter.com/Wz75YqPDol

Rothschild started off with “Well, Lionel, we’ll try to create some answers for you over the next hour or so, but first off, Troy, I feel the need to just apologize to the viewers. I know we didn’t play, we didn’t even really run this broadcast, but the fact that you had to watch that? On our air? I feel bad. I was here and I didn’t even want to watch it. Where do we begin?” And Renck responds “Listen, it burned the retinas, it was that awful. Both teams stunk offensively. What was most shocking is they were positioned to win the game, as ugly as it was, much like that Texans’ game two weeks ago, and then Russell Wilson made two of the most facepalm throws he’s made in recent years…”

“…And then you get to the fourth-and-one, season on the line, Nick, and what do they do? They go out of the shotgun! Which has not worked once in the red zone all year! And yet, they do it again! It just defies logic, it really does. They deserve this loss. And there needs to be some consequences. They need to not only self-scout, but Nathaniel Hackett has to look himself in the mirror, and so does Russell Wilson. Because this is one of the worst games he’s played in his career.”

If people didn’t watch the game, that may seem a little hyperbolic. But the stats comparing this to the last week of replacement players 35 years ago help illustrate how bad this was:

Tonight's Colts-Broncos game is the first NFL game in which each team took multiple sacks, threw multiple interceptions, had multiple fumbles and failed to score a TD since a Giants-Bills game on October 18, 1987.

That was the last week with replacement players during the strike

In any case, that is a remarkable intro into postgame coverage, especially from the local affiliate carrying the game. But it’s hard to fault anyone for being critical after that particular game. And the apology to viewers was a nice touch. And, given how many local sports postgame shows tend to start with “What a great game!” even when it’s not deserved, it’s fun to see the exact opposite when a trashing of a game is fully deserved.