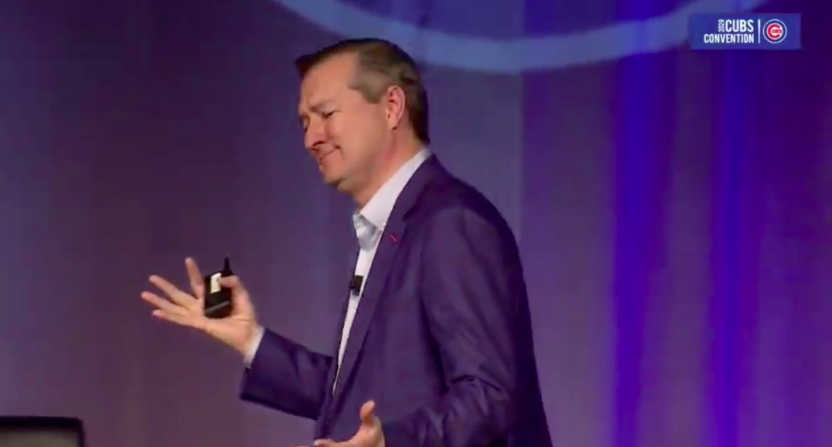 In theory, the Marquee Sports Network, a cable channel dedicated entirely to the Chicago Cubs, sounds like an exciting win for fans. A 24-hour station that will be home to around 150 Cubs games each season sounds great. However, it’s all the fine print that has caused a lot of consternation and concern over just how good of a deal it will really be.

First is the fact that Cubs fans have been accustomed to watching their team play for free for decades on local channels like WGN and CSN Chicago. Shifting to a paid model might be the way of the future for sports broadcasting but it’s still an added cost in a world of ever-increasing cable costs.

And that’s even if Cubs fans can get Marquee in their area. The station has carriage deals with DirecTV and some other carriers but has yet to close a deal with Comcast. And guess which major city has a whole lot of Comcast subscribers itching to watch as many Cubs games as possible? That’s right, Chicago where an estimated 1.5 million homes are served by the cable provider.

Cubs fans are well aware of what’s been happening in Los Angeles where Dodgers fans spent years waiting for a stalemate between Charter Communications and most LA providers. The negotiation effectively created a blackout in the LA market, which is a worst-case scenario for Cubbies faithful. Imagine going from having access to all Cubs games to none. And it remains a potential outcome until that deal is closed.

Couple all of this with the arrangement the Cubs made with notoriously right-wing Sinclair Broadcasting to run the network and the franchise’s lack of any major offseason moves to shake things up, and fans are starting to get a bit itchy.

All of which brings us to this weekend and the 2020 Cubs Convention, a yearly event that brings fans together with current and former players and provides them with a state of the union, so to speak, about the franchise. As part of the event, Tom Ricketts, Chairman of the Chicago Cubs, spoke to a collection of fans to give them updates about the direction of the team as well as the impending launch of Marquee that was meant to energize and excite them.

It did not go as planned.

Safe to say Cubs fans were unhappy when Tom Ricketts started talking about the new Marquee Network.. (Via @AldoSoto21) pic.twitter.com/g6jEi3MvHG

Ricketts: “Our promise for the next ten years is to continue to have the best relationship with our fans of any professional sports team in the world. And that starts with the Marquee Network.”

Ricketts: “What do you have against the Marquee Network?

So that was awkward.

Ricketts was oblivious to how he ended up in that situation, telling the Chicago Tribune that “I’m not sure I was being booed.” He did have a theory of his own, that Cubs fans were simply “worried about change.” He did not seem to consider how all of the aforementioned factors could have played a part as well.

He might be right, that once the Comcast deal is signed and Marquee Network is up and running, Cubs fans will be just fine with the specialized offerings just as many other sports franchises have become accustomed to. But if you know Cubs fans, you know that you don’t mess with their access to the team. Plus, no fanbase likes being used as pawns in a game between very rich people.

The Ricketts have already started changing Wrigleyville, the area surrounding Wrigley Field, from it’s humble roots to an upscale hangout anchored by boutique hotels and trendy bars. It’s become clear to many that their focus is on building a portfolio and increasing wealth, and if fans have to suffer in the interim for that to happen, so be it.

If nothing else, it must have felt cathartic for Cubs fans to boo the guy behind all these pricey changes to their fandom, even if they can’t ultimately do anything to change the trajectory of things.