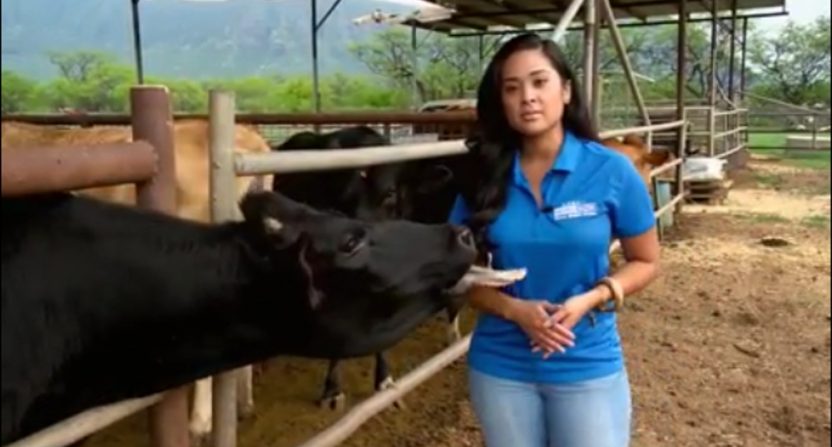 Local TV news is often full of entertaining moments and mishaps, from a 14-way box on Atlanta’s snowmageddon to the L.A. anchor who crashed riding an electric scooter, but this one from reporter Jobeth Devera of Hawaiian stations KGMB and KHNL (CBS and NBC affiliates respectively) is something else.

On Tuesday, Devera was walking near a bunch of cows and filming a piece on the push to legalize the sale of raw milk in Hawaii. While she was talking, one cow stuck out its tongue, and did something you don’t usually see on the news:

waaaait for it…….. • • • #thatjusthappened #thankgodwewerentlive #news #newsbloopers #rawcut #looklive #tvnews #reporterlife #bts #gotmilk? • Anyway, now that I have your attention.. make sure you tune in to @hawaiinewsnow tonight at 10 for my story on the push for legalizing #RawMilk in #Hawaii

Devara’s reaction is great, too, especially considering that this was a filmed segment rather than a live one (as evidenced by her #thankgotwewerentlive hashtag). Kudos to her for deciding to share it anyway, and smartly using this post to promote her actual on-TV story. It’s a funny moment, and it shows some of the challenges of doing a segment with animals in the shot. That’s something for other reporters to perhaps be wary of in the future.