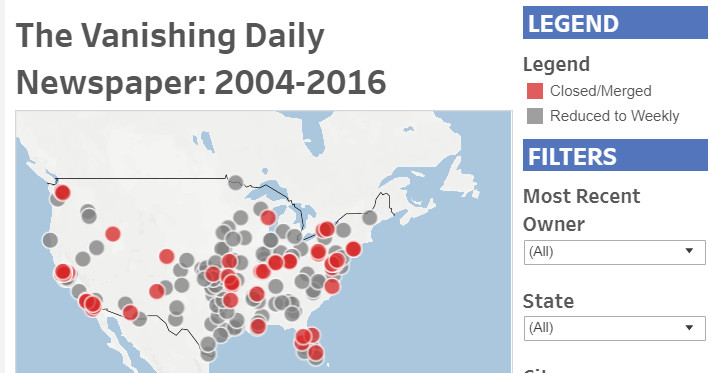 There have been countless sweeping cuts in the media industry over the last few years, with one of the big recent ones coming at iHeartRadio and impacting more than 300 people at local radio stations across the U.S. (and perhaps as many as 1,200). Often, cuts in local TV, radio or print journalism are blamed on increased digital competition for viewers/listeners/readers/advertisers, and that certainly can be a factor, but there’s a compelling case to be made that many recent ones are more about consolidation into giant corporations, with several of those controlled by private equity groups focused on making massive cuts and paying out quick dividends rather than the future of the business.Dan Kennedy lays out some of that case in a piece for Boston NPR affiliate WGBH:

Radio and newspapers have something else in common, too: Corporate greed is making their problems much worse and preventing the kind of investments that are needed to position them for the future.The latest assault on the public interest arrived last week in the form of massive cuts announced by iHeartMedia, which owns more than 850 radio stations across the country, including nine in Boston. The company, formerly known as Clear Channel, emerged from bankruptcy last July with $5.75 billion in debt (down from $16.1 billion pre-bankruptcy) and under the control of — as The Wall Street Journal’s Anne Steele reported — “lenders and bondholders led by Franklin Advisers Inc.”In other words, iHeart these days is a financial gambit more than it is a media company. And so it was hardly a surprise when the company cut hundreds of jobs. …The road to radio ruin began with one giant leap: the Telecommunications Act of 1996, a bipartisan monstrosity that removed any meaningful caps on ownership. Previously, Congress and the FCC strictly limited the number of radio stations someone could control both nationally and in a given market, which meant that most stations operated under local ownership.Within a year, as I reported for The Boston Phoenix, the feeding frenzy had begun, as national corporations gobbled up radio stations by the dozens, financing them with debt they paid off by cutting expenses. What happened with iHeart last week was just the latest in a hollowing-out that has been playing out for a quarter of a century. You could even say that the success of public radio — including Boston’s two leading news stations, WGBH (89.7 FM) and WBUR (90.9 FM) — is a direct consequence of the implosion of the commercial airwaves.The destruction of local newspapers, like the demise of local radio stations, has been under way for at least a generation, with chains like GateHouse Media and Gannett merging and slashing jobs.

That’s worth further exploration. On the newspaper side, a worthwhile resource is NewspaperOwnership.com, a site based around a 2014 report from University of North Carolina professor Penelope Muse Abernathy (the school’s Knight Chair in Journalism and Digital Media Economics). The site includes lists of what the largest companies owned in 2004, 2014, and 2016, a list of daily newspapers closed and merged since 2004, (where the screenshot at top comes from; the full version in that link is searchable), and case studies on investment-company owned papers. But the executive summary gives a good overview of what’s gone on:

“Over the past decade, a new media baron has emerged in the United States. Private equity funds, hedge funds and other newly formed investment partnerships have swooped in to buy — and actively manage — newspapers all over the country. These new owners are very different from the newspaper publishers that preceded them. For the most part they lack journalism experience or the sense of civic mission traditionally embraced by publishers and editors. Newspapers represent only a fraction of their vast business portfolios — ranging from golf courses to subprime lenders — worth hundreds of millions, even billions, of dollars. Their mission is to make money for their investors, so they operate with a short-term, earnings-first focus and are prepared to get rid of any holdings — including newspapers — that fail to produce what they judge to be an adequate profit.”…The large investment groups tend to employ a standard formula in managing their newspapers — aggressive cost cutting paired with revenue increases and financial restructuring, including bankruptcy. Most have financed acquisitions with significant debt. To reduce costs, the new media barons have typically laid off staff, frozen wages, reduced benefits and consolidated sales and editorial functions. With revenues and profits still declining, much initial cost cutting has been painful, but necessary — and may have actually saved some newspapers in the short term. However, for the most part, profits derived from cost cutting have not been reinvested to improve their newspapers’ journalism, but used instead to pay loans, management fees and shareholder dividends.

While that report is specific to newspapers, similar consolidation stories have played out across local radio (especially with iHeartMedia, then Clear Channel, gobbling up local stations after that aforementioned 1996 Telecommunications Act) and TV (especially with Sinclair’s various takeovers, including the former Fox Sports regional sports networks last year, and with Nexstar acquiring Tribune). And consolidation is a key part of why so many big cuts are happening. Large mergers are often sold as “it will let us compete with digital!”, but those mergers tend to lead to even more debt (with the acquiring company taking on debt to pay the acquiree, and with the acquiree often paying that out to shareholders, including those investment groups) and to giant rounds of layoffs and buyouts.And while those companies claim they’re being efficient and avoiding duplication with cuts, many of the layoffs are much more than that. Those cuts often take out differing perspectives and detailed coverage on teams in favor of syndicating one report across a chain, or worse still, remove local coverage entirely to replace it with regional or national coverage. That’s what’s going on with a lot of the iHeartMedia cuts, and while some protests in favor of local (notably at 1460 KXNO Des Moines) have led to reversals, a whole lot of local coverage is vanishing altogether as a result of large-scale consolidation and subsequent cuts.What’s perhaps particularly troubling is that there appears to be further potential consolidation on the horizon. That’s particularly obvious with newspapers, where NiemanLab’s Ken Doctor wrote in December that even after the GateHouse-Gannett merger, more could be imminent, perhaps even reducing the five biggest companies to two:

The first half of 2020 “will be the final dance of the newspaper industry,” one of my savviest financial sources told me Thursday — someone who’s been right on the money for years. “Everything will get resolved in the first half of 2020.”By “everything,” he means the consolidation of ownership and control of the United States’ major newspaper companies. What as recently as three weeks ago were five big chains — Gannett, GateHouse, McClatchy, Tribune, and Alden Global Capital’s MNG Enterprises — could well, by the middle of 2020, be two.…What’s likeliest? Observers put a Tribune/MNG deal at the top of the list. The biggest reason? Just the big cost cutting allowed by putting two big companies together. In recent years, there have been various non-financial roadblocks getting in the way of various tie-ups. (Do the geographic footprints fit together? How about the corporate cultures? Do they agree on strategy going forward?) But now, the imperative is cost-cutting, and that trumps all else.…How might we get to two? That comes down to McClatchy. After a Tribune/MNG merger, McClatchy would again be the third-largest U.S. newspaper company — the position it held before adding Gannett to GateHouse promoted it to No. 2.And as a standalone No. 3, struggling with the same operating economics as its peers, it would certainly like a dance partner as well. Except the dance floor is looking pretty sparse this late in the night. Not many options left. So it’s possible McClatchy’s play would be to join up with the new Tribune/MNG — or maybe even New Gannett. Either would be a level of consolidation almost unimaginable in the industry not long ago.

Further big consolidations could happen in radio and TV, too, and consolidations will likely lead to further massive waves of cuts while shareholders get big payouts. It’s also significant that this is happening under a federal administration that seems quite favorable to big mergers and acquisitions (unless, apparently, if they involve Disney taking over RSNs, or AT&T/Time Warner, which still went ahead anyway). And several Democratic presidential candidates have criticized some of these acquisitions; with a presidential election on the horizon in the fall of 2020, that may provide further incentive to get consolidation deals done quickly. (And it’s notable that presidents have played a large role in regulating acceptable levels of consolidation in the past.) At any rate, it certainly appears that there may be many more significant media mergers and acquisitions coming down the pike soon, and that those may lead to a lot of further local cuts.[WGBH, NiemanLab, graphic from newspaperownership.com]