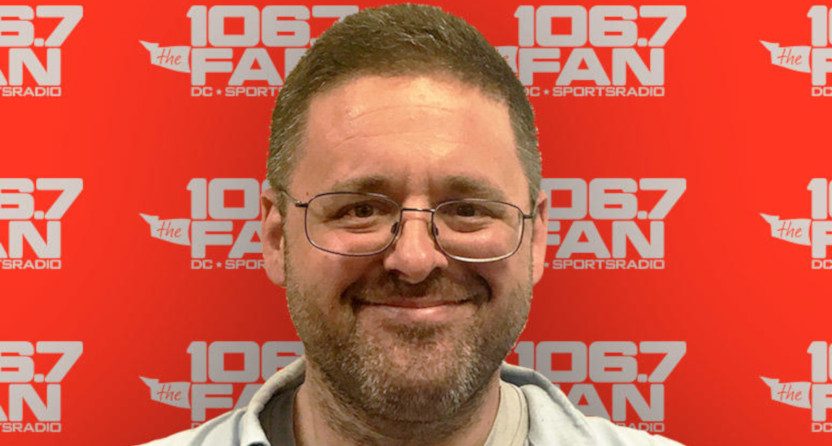 The numbers of sports figures being pulled over during radio interviews appear to be on the rise, and this seems to be a particular problem with those doing interviews with 106.7 The Fan in Washington, D.C. This has happened to at least Chris Cooley (2010, on The Fan’s The Sports Junkies), Clinton Portis (2013, on The Fan with Kevin Shafer and Fred Smoot), Steve Smith (2014, on The Dan Le Batard Show), John McClain (2015, on The Rich Eisen Show), Stugotz (2017, on a radio station in Peoria), and Peter King (earlier this month, on The Dan Patrick Show). And now, we have a third one from 106.7 The Fan, with station columnist/weekend host Chris Russell getting pulled over during an interview on The Chad Dukes Show Monday afternoon.

Funnily enough, this came after Dukes made fun of Russell earlier this year for taking video (of cranes around The Fan’s headquarters, a subject he likes to complain about) while driving. But this time around, Russell’s phone use while driving got him busted. Here’s the clip, with the portion about Russell getting pulled over coming around 2:39 while he was discussing Evgeny Kuznetsov’s suspension from international hockey over a positive drug test for cocaine:

A transcription of that part, which comes after some sirens while Russell finishes his thought on Kuznetsov:

Russell: “Dukes, I think I’m getting pulled over. This is awesome.”

Dukes: “Are you serious, Rooster?”

Dukes: “What are you getting pulled over for?”

Russell: “I think because I’m talking on my cell phone. So I think that’s why I’m getting pulled over.”

Dukes: “There’s some belly slaps for you, Rooster. Want to keep us on the line and we can talk to Officer Friendly for you?”

Dukes: “How are we going to top that?”

Producer: “Dukes, when I heard the sirens, I thought about talking to you and saying ‘I hope they’re coming to take him away,’ and they actually are!”

Dukes: “How quickly did he snap to? He was giving that cop like a little bit of lip, and then he goes ‘Okay, okay!'”

Dukes: “Oh my god. That was so great. Wouldn’t it be great if they tased The Rooster?”

…Producer: “We’ve got to find out which police department this is and send them a fruit basket or something.”

…Dukes: “I hope people were listening to that. It ain’t going to get no better!”

And here’s some of the Twitter exchange around this:

Oh my god. @Russellmania621 just got arrested live on my show. I'm walking away like Andrew Luck after this one. Nothing can top it.

How dare that cop get in the way of my pontificating? https://t.co/3jGAu2UyR2

Yes, this happened. Yes, I was technically breaking the law. I was trying to do my job. https://t.co/Gsnnp5fIBM

Haha…the ticket thing was me being sarcastic with my boss. I mentioned with @chaddukes after that tweet that I did not get a ticket. I should have been more clear.

So yeah, if you’re scheduled for a radio interview (and perhaps especially with 106.7 The Fan), maybe try to not be driving at the time? Or at least use a hands-free phone setup? Otherwise, what happened to Russell may be coming for you…