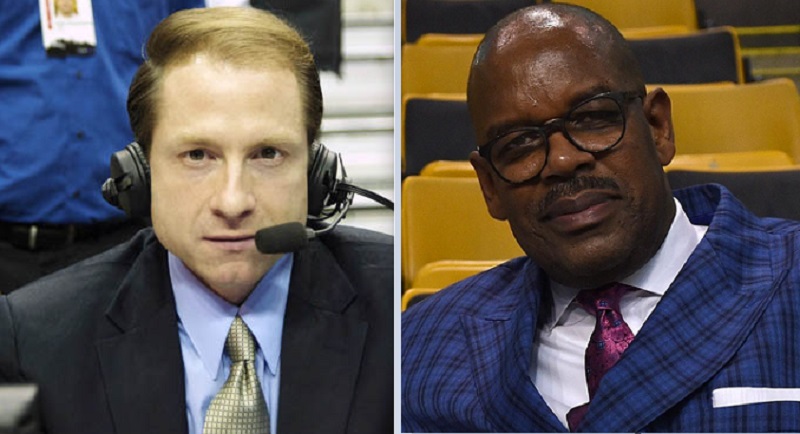 There hasn’t been any NBA basketball played since March 11 when the league suspended the remainder of the 2019-20 season due to COVID-19 concerns. Like just about everything in daily life right now, the NBA’s return is uncertain. Will the rest of the season be played out in some fashion?

In the nearly three weeks since then, fans yearning for pro hoops have been able to watch previously played (some of them “classic”) games on NBA League Pass, ESPN, and whatever might be offered on regional sports networks. But CLNS Media Network, along with Boston Celtics radio broadcasters Sean Grande and Cedric Maxwell, have offered fans something a bit different and rather creative.

Beginning last Wednesday, when the Celtics were originally scheduled to play the Memphis Grizzlies, CLNS broadcast a simulation of the game (via NBAGameSim.com) called by Grande and Maxwell, accompanied by crowd noise, squeaking sneakers, and dribbling basketballs. The play-by-play broadcasts, which include a halftime show with Adam Kaufman and Kendrick Perkins, are streamed live when the actual game was supposed to have taken place and then released as a podcast the next day.

In the simulated game, Boston defeated Memphis, 110-107. Here’s how it sounded:

The plan is for CLNS to stream simulations of every postponed game remaining on the Celtics’ schedule. (As of this writing, three have been played and eight games are left.) That will include simulated playoffs. (When the actual season was suspended, Boston held the No. 3 seed in the Eastern Conference and would’ve been matched up against the Philadelphia 76ers in the first round of the playoffs.)

Judging from his tweets, Grande has been enjoying the broadcasts, asking fans to suspend their disbelief a bit and go along for the ride.

Guess who's back home at TD Garden tonight? 🤔#Celtics vs #Trailblazers

As Grande explained to the Boston Globe‘s Chad Finn, his play-by-play calls along with Maxwell’s reaction and analysis have to be created entirely from very little information provided by the game simulation.

“With the score and a box score, I get one line per play — “Tatum makes 2-point shot” — and I have to invent the rest,’’ said Grande. “It’s really challenging, because instead of telling story in real time, you’re writing most of it, as well.”

Under these circumstances, imagination is a broadcast crew’s newest tool. It has to help that Grande and Maxwell have worked together for more than 10 years, developing a strong chemistry and comfort level in calling a game. Those with a talent for writing and visualization should find a new challenge here. Obviously, that’s preferable to the alternative of calling no games at all.

The simulated Celtics 2019-20 season and its broadcasts will continue Wednesday night as Boston hosts the Miami Heat.