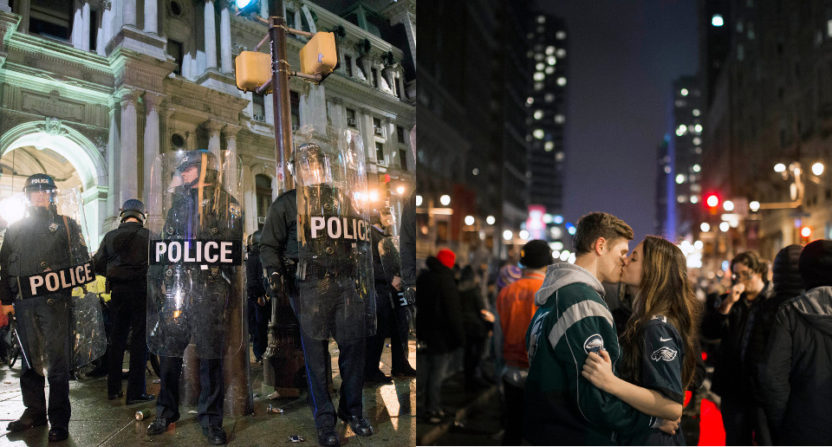 News outlets have often strived to report the unusual and to gain the attention of readers, listeners or viewers by doing so, seen in everything from the Hearst-Pulitzer battles to the much-discussed “man bites dog” principle to the swarms of plane-crash reporting, and that’s perhaps only intensified in a digital age where the importance of stories that will be clicked and shared has risen and where media organizations know exactly how much attention each story gets.

Particular excesses here are often criticized with labels from “yellow journalism” to “clickbait,” and sometimes deservedly so, but the base principles of “cover what’s outside the norm” and “cover what the audience wants” are followed by every media organization to some degree. But that can lead to some real-world consequences, from starting wars to underestimating the odds of dog bites and overestimating the odds of plane crashes.

An interesting case to examine along these lines is championship celebration coverage, which former Philadelphia 76ers VP/current NBA writer Ben Falk discussed on Twitter Monday in the wake of the Eagles’ Super Bowl victory:

If you read the news it sounds like the world is a terrible place and it’s never been worse. But that’s because of what the media chooses to focus on.

And that’s what happened last night in Philadelphia as thousands of people poured into the streets after the Eagles’ victory.

Stories like that make it sound like it was a war zone on Broad Street. Except that wasn’t my experience. Was there craziness? Of course. But it represented an overwhelming minority of people.

I passed a woman on the street who was saying to her friend: “I don’t feel worried…it feels like everyone in Philly loves each other tonight.” That’s how I felt too. The City of Brotherly Love, indeed.

This is the power of sports. There isn’t much else that can bring thousands of people from all backgrounds together in unified joy. Let’s revel in that, and not let a few bad apples color the perception of an entire city.

While this is perhaps a particularly sensitive topic around the Eagles given previous media coverage of incidents involving Eagles’ fans (both this year and going back decades), it’s a conversation that could apply to just about every sports celebration or protest that makes the news. It’s definitely not the majority of West Virginia fans that burn couches, or the majority of Vancouver Canucks’ fans who rioted after a 2011 Stanley Cup final loss, or the majority of Georgia fans breaking windows with their face, or the majority of fans of all sorts smashing TVs.

But, at the same time, that doesn’t mean that those incidents should be ignored, or that people should only write “Majority of Eagles’ fans celebrate peacefully” instead of covering fires, property damage and clashes with police, or the fan eating horse poop. A peaceful celebration isn’t that notable (except to the local news outlets doing streeters, and even that often goes wrong), and the areas where it wasn’t peaceful or normal are more interesting to many.

Of course, what media outlets cover and how they cover it shouldn’t be determined just by the clicks a certain piece gets. Going too far that way lies madness, and that can create many of the aforementioned problems described earlier. If people are terrified of air travel thanks to national media’s wall-t0-wall coverage of plane crashes, but unconcerned about driving despite the much-higher occurrence of car crashes (which is itself at least part of why they’re not regularly big news), media coverage is at least partly to blame. (For a much more in-depth examination of this, the Daniel Kahneman – Amos Tversky work on availability heuristics is highly recommended; it’s detailed both in Kahneman’s Thinking, Fast and Slow and in Michael Lewis’ The Undoing Project.) But there’s also a good argument for providing at least some coverage of events like plane crashes, which both are unusual and impact a significant amount of people.

If anything, the plane-versus-car case is an argument for discernment from news consumers, and an argument for people to understand how and why the news covers what it does. Consumers should keep in mind the hidden part of the iceberg, or all the things that don’t receive major news coverage simply because they aren’t unusual. That certainly applies to championship parades, too; it’s worth remembering that for every reveler doing ridiculous or dangerous things who makes widespread news, there are probably plenty of others who celebrated peacefully and didn’t cause problems.

But that doesn’t mean that news outlets are wrong to cover those who do the ridiculous things. Part of news coverage is serving your audience (going too far there causes problems, but ignoring that entirely means you have no audience), and another part of it is covering the unusual. And things like fires started aren’t suddenly less newsworthy because not everyone did them; the headlines in the wake of something like the Harvey Updyke incident weren’t “Millions of Alabama fans don’t poison Auburn trees,” and for good reason. Moving away from sports and to a wider news perspective, “Millions of Americans didn’t commit murder Sunday” wouldn’t be a story, but a murder would be.

The key is perhaps contextualization, and that’s especially important with championship coverage like this. Stories on the odd events that did happen Sunday should certainly include some context on the scale of the problems relative to the total size of the revelers, and perhaps also some context on how this compares to previous celebrations in that city or other cities. While there’s value for news outlets in covering fires, property destruction and so on, as those are perhaps more newsworthy and more interesting elements compared to people peacefully celebrating, it’s important to be careful to portray how the problems relate to the overall event being covered. Readers shouldn’t come away with the sense that the city’s turned into a war zone if it hasn’t.

Where this perhaps gets particularly tough is with headlines and photos, especially in an age where that’s how many people react to a story. It’s easy for an in-depth piece to fully contextualize what happened, but most pieces only get one headline and one lead photo. And that’s usually going to be about the most unusual and most newsworthy part of the story, and that can lead to certain elements being given more play. Even if a story fully contextualizes what happened, that doesn’t matter to those who react based only on the headline and photo. And with photos in particular, it can be tough to show all of what’s going on.

This very post is an example. The header image is two separate photos from the same photographer (Joe Lamberti of the South Jersey-based Courier-Post, via USA Today Sports Images), taken on the same night near the same location, but the left image of police officers with riot shields evokes a very different feeling than the right photo of two fans kissing while others peacefully celebrate around them. In most cases, an outlet would choose one or the other of those photos to lead with, and that would likely create a different reaction, even if the text of the associated article was identical. Photo selection matters, and outlets need to think about that, and if at all possible, contextualize the photo used in the headline as well as in the copy.

However, the responsibility here is on consumers too. It’s notable that there has been a significant amount of coverage of Philadelphia’s peaceful, exuberant celebrations too, both after the conference championship game two weeks ago and after Sunday’s victory. It’s not just that media are only reporting bad (or in the case of the horse poop, odd) things. But the more dramatic, more unusual stories are going to be read more and shared more, and that’s understandable. Interestingly enough, a similar idea came up in another context Monday, with some Twitter complaints against USA Today for a story on Tom Brady’s family rather than coverage of the Eagles’ victory, and an editor responding that they did cover the Eagles’ win, but those stories weren’t shared as widely.

Gisele Bündchen, Tom Brady’s wife, turned New England’s 41-33 loss into a teaching moment for their children — two of whom were crying after the game. https://t.co/wKatPcqRZV #SuperBowl pic.twitter.com/zQuKtdGH69

We did, in fact, publish ~ 11 stories on the Eagles winning. Strangely, people seem to prefer clicking on this!

Cliffe, a magazine and digital writer and the former editor of The Toast, had a good response afterwards:

Lord, I have so much sympathy with this as an editor who has been there. I can think of so many times people say they want X Goodthinkful Content and when you look at the metrics it's only shared and never read. https://t.co/WpZKvBb0S6

That perhaps sums it all up. News outlets are often covering what critics are criticizing them for not covering, but those pieces don’t always gain much traction or attention., and that provides less incentive to do them. Pieces on the unusual often gain tons of attention, providing incentive to do that down the road, but then get criticized for not being fully representative of the situation. And it’s probably impossible for this to work in a perfect way overall, as the value of the unusual both from a news standpoint and a reader interest standpoint means that certain stories are always going to be overrepresented and overplayed relative to their actual impact.

But both news outlets and media consumers can take steps to improve, news outlets by contextualizing how their reports compare to the broader situation and consumers by thinking about what’s not being discussed or not receiving wide attention. Both reporters and readers should think critically about what’s being presented and what isn’t, and maybe that would lead to a deeper and more nuanced overall understanding of the situation.