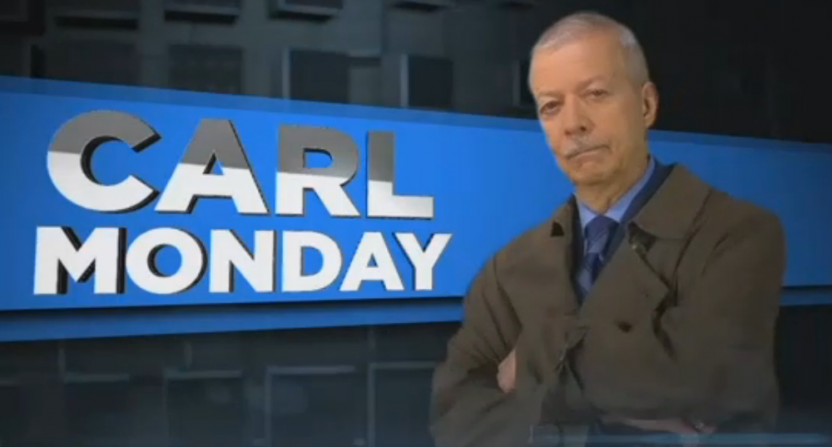 A Cleveland TV station came out with a bizarre report Monday about alleged sexual assault by an unnamed NFL draft prospect, and it was thanks to a Deadspin Hall of Fame reporter. That would be Carl Monday, who became internet infamous in May 2006 for chasing down an Ohio State fan who masturbated at a public library, a segment later mocked by The Daily Show. But this time around, Monday is dropping much more serious allegations, suggesting that police are stalling in producing a report in a case of alleged sexual assault by a potential first-round NFL draft prospect. (Update: TMZ has since reported that the player in question is Ohio State cornerback Gareon Conley.) Here’s Monday’s segment:

The segment involves Monday walking around and asking various people for this police report, which they do not provide. He then shows a report that was released from the same night two weeks ago in an unrelated case of sexual assault, and zooms in on it while highlighting key phrases. WOIO’s web piece then has more detail still, including a statement the prospect’s lawyer, Kevin Spellacy, provided:

Spellacy says his client was in Cleveland with a group of friends and had met a 23-year-old woman in Cleveland’s Warehouse District, at the Barley House on April 8. The next morning, April 9, around 3:50 a.m., an off-duty police officer called for police and EMS for an alleged sexual assault victim at the downtown Westin Hotel, according to EMS and police dispatch. Officers and EMS arrived on scene, took statements, and the woman was transported to a local hospital. The player was not there when police arrived.

This is odd on so many levels. As WOIO’s web piece indicates, the station is quite aware of who the prospect involved here is, as they received a statement from his attorney, Kevin Spellacy. Their choice to run a piece like this but not name the player feels very unusual, especially as they don’t have anything firm; charges have not been filed, and they don’t have that police report. And they don’t seem to have conclusive proof that the police are delaying, either; the argument that because one report from that night is available the other should be as well doesn’t seem to be too convincing, and this delay could exist for any number of reasons. The three-minute video report by Monday, which is mostly shots of him walking around in a trenchcoat and asking various police department officials for these records that they won’t provide, doesn’t seem to have a lot to back it up. WOIO’s approach here took a lot of criticism on Twitter Monday night:

"We want to be very clear he has not been officially charged with a crime at this point." Thanks, Grantland Rice.

this is v bad journalism https://t.co/m050KijARA

A big problem with releasing incomplete information like this is it will get the internet hunting for the rest, and that could lead to wrong conclusions being drawn. People might start implicating any prospect from Ohio, or anyone who’s had any connections with Spellacy’s known clients, and that could be someone who wasn’t involved at all. And there are particular concerns here ahead of the draft, as any potential criminal link has often been a huge blow to prospects’ hopes; consider La’el Collins, who was considered a first-round talent by many in 2015, but went undrafted that year thanks to his name being mentioned in connection to a double homicide (he was eventually cleared of all charges, and signed as an undrafted free agent with the Dallas Cowboys). An incomplete report like this could mean a difference of millions of dollars.

Are there potential issues if the Cleveland police are actually making an effort to keep this name quiet until after the draft? Absolutely. And if there’s proof of them acting in an unusual manner here and actually giving this accused prospect special treatment, that could be a real problem.  Sexual assault’s an incredibly serious charge, and covering that up in service of a prospect’s NFL ambitions would be horrible.

But WOIO’s report here doesn’t seem to have proof the police have done anything wrong. And the station has definitely made themselves a big part of the story by running a report, but only sharing this little evidence. We’ll see how this all plays out, and maybe they’ll eventually be praised; if their action leads to the police releasing this report, and if this case winds up leading to a conviction, maybe they’ll be seen as doing the right thing.

For now, though, WOIO’s decision to run with this seems quite problematic, given how little hard evidence they seem to have had. And Monday’s reputation (consider how his Wikipedia entry talks about how he “started investigative reporting by leaking the roster list of the Garfield Heights High School Bulldogs baseball team”) doesn’t exactly help their cause, either. We’ll see how this pans out in the end, but the actions here by Monday and WOIO may wind up getting a lot of criticism.