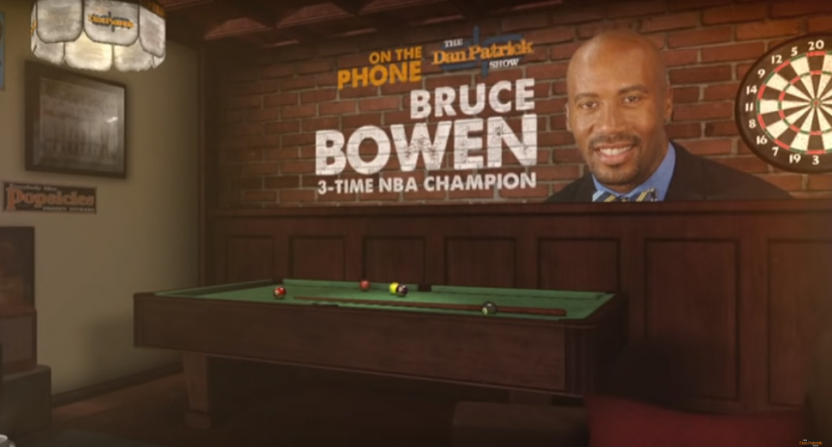 One of the most intriguing sports media stories recently was Adrian Wojnarowski’s ESPN report that the Los Angeles Clippers decided not to bring back TV analyst Bruce Bowen after just one year thanks to the comments Bowen made in a Sirius XM interview about now-Toronto Raptors forward Kawhi Leonard (where he said there was “nothing but excuses going on,” Leonard was “getting bad advice,” and he was “protected in San Antonio”). Leonard doesn’t even play for the Clippers, but is reportedly one of their free agency targets next summer; firing an analyst over that is a new one, though.

And while there have been some reports that the Clippers might have considered a change anyway, Bowen told Dan Patrick Thursday that he was specifically told (by the Clippers official who originally brought him in) his comments on Leonard were why he was let go:

“It was basically ‘We don’t view your views that way. And because of your comments on Kawhi Leonard, we’re choosing to go a separate way.'”

Patrick said he’d also heard that from a Clippers’ source.  “It’s just bizarre. I was told by someone who’s with the Clippers, ‘Look, we’re not taking any chances here, we can’t.’ And I thought ‘Man, you’re going to fire Bruce Bowen because he was honest about Kawhi, and therefore Kawhi might not want to play for the Clippers. Is that really what this is all about?”

“One thing I thought about in all of this is Kawhi never said ‘I want to play for the Clippers.’ Kawhi said that he wants to play for the Lakers. And so, unfortunately, if you’re going to run your organization based on hopes, maybes, and getting rid of others…if I’d tore him down and I was disrespectful to him, that’s one thing, but that’s not the case. As an analyst, I’m supposed to talk about what I see and what I feel for this game that I love. And so if you can’t do that, what does that say about your organization?”

Patrick asked if Bowen had heard anything about this being thanks to pressure from Leonard’s camp, and Bowen said he thought it was just a Clippers’ decision.

“I don’t think I’m that powerful where I would be the reason where someone would not want to go to a team. Are you playing or are you listening? And if you are listening, then listen to the words that are said and receive the constructive criticism. Because that’s my job, to be critical of someone’s play. Now, if I’m just tearing a player down, that’s one thing, but I don’t think that I’m big enough that someone would say ‘I’m not going there because Bruce Bowen’s there and he’s on the mic. I’m not going to deal with that.'”

Bowen then said he thinks it’s his job to be an honest analyst rather than a pure homer.

“I’m the same person who’s just going to call it how it is. You go 10 for 15, I’m going to talk about how you were utilizing jab-steps, setting your guy up to come off a screen, and getting down in defensive position to get steals. And I’m praising you, but I also have to be honest as well, because there are listeners out there to see what I’m saying, is it just a homer or is it someone who’s telling the truth about the game that he loves?”

Patrick responded by saying that team broadcasts seem to expect homerism these days, though.

“I think the difference is, and you found this out the hard way, you can be critical and do your job as an analyst on ESPN, but you can’t do that in a local market. I think that’s the big difference. I was told that ‘Bruce knows he’s supposed to be a homer, he shouldn’t be talking about Kawhi because we would like to get Kawhi. We can’t get free agents here and these kind of comments can only do damage to that possibility.'”

Bowen then said the Clippers have bigger problems than remarks from their TV analyst.

“Dan, I think if you can’t get free agents in California, in Los Angeles that is, that has nothing to do with Bruce Bowen, that has more to do with the organization.”

It’s pretty remarkable to see an analyst not brought back over comments he made on different airwaves about a player not with the franchise, and to see figures with that organization both specifically tell the analyst that and then tell a media figure like Patrick that. And the “Bruce knows he’s supposed to be a homer” is particularly bad, illustrating how some teams really don’t want their analysts to actually be analysts. Patrick’s “you can be critical and do your job as an analyst on ESPN, but you can’t do that in a local market” comments hopefully don’t apply everywhere, but they certainly seem to apply with the Clippers.