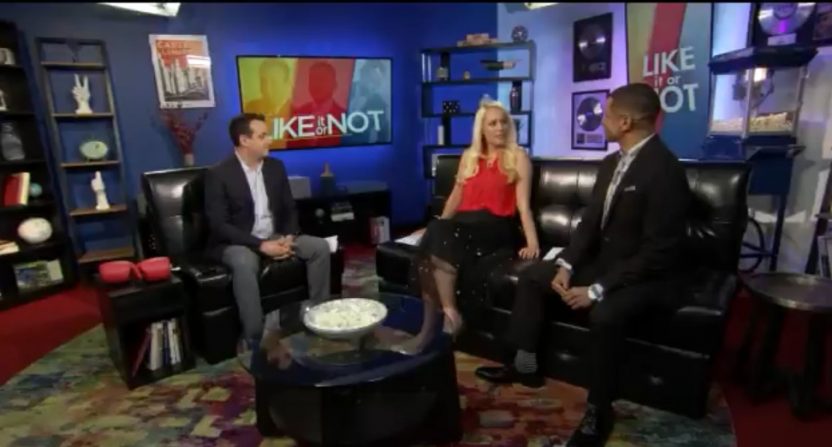 Back in February, former ESPN personalities Britt McHenry and Bram Weinstein teamed up with D.C. radio host Guy Lambert for a weekly half-hour politics and pop culture discussion show on D.C.’s Fox 5 Plus, titled Like It Or Not. As per AdWeek’s Stephanie Tsoflias Siegel, the show is now going daily on Fox 5 proper, airing Monday through Friday at 7 p.m., and Fox 5 anchors Nick Smith and Marina Marraco will join it; the five hosts will rotate as commentators. It promises to “go beyond the headlines with candid opinions on a wide range of topics.” Here’s a sample clip from May with McHenry going in on the Royal Wedding:

The #RoyalWedding is just hours away, but will you get up early to watch it? #LikeItOrNot's @BrittMcHenry finds the whole thing odd…

This is a pretty significant upgrade for Weinstein and McHenry, as the show initially aired Fridays at 10:30 p.m. (not exactly a destination timeslot) on Fox 5 Plus, with a repeat at 8:30 p.m. Saturdays. And it was initially only a six-week preview. But it’s now turned into a daily show on Fox 5 proper, coming out of the news and leading into TMZ before the evening’s Fox network programming.

Weinstein worked at ESPN for seven years, including five as a SportsCenter anchor, before choosing to leave in 2015; since 2016, he’s hosted The Bram Weinstein Show middays on D.C. station ESPN 980, replacing Tony Kornheiser’s show. McHenry worked at ESPN for three years (including the infamous tow truck incident and its resulting suspension in 2015) before being caught up in last April’s layoffs, and at one point claimed the network demoted her for being white. Since exiting ESPN, she’s been airing plenty of political opinions and sports-adjacent hot takes on platforms ranging from Twitter to The Federalist to Fox News, and has talked about how she’d rather be involved with politics than sports. It sounds like she’ll get even more of a chance to do that with her show now going daily.

Hosting a daily politics and pop culture show is far from the most unusual post-ESPN transition we’ve seen; others caught up in those April 2017 layoffs have wound up in roles from Iron Chef floor reporter (Jaymee Sire) to Your Call Football coach (Merrill Hoge) to executive director of the Aspen Institute’s sports and social program (Tom Farrey). But it’s interesting to see this project from McHenry and Weinstein expanding, and to see a show focused on political/cultural debate working for a local station. Perhaps we’ll see things along these lines from other local networks down the road, and perhaps some other sports personalities will get involved in shows like this.