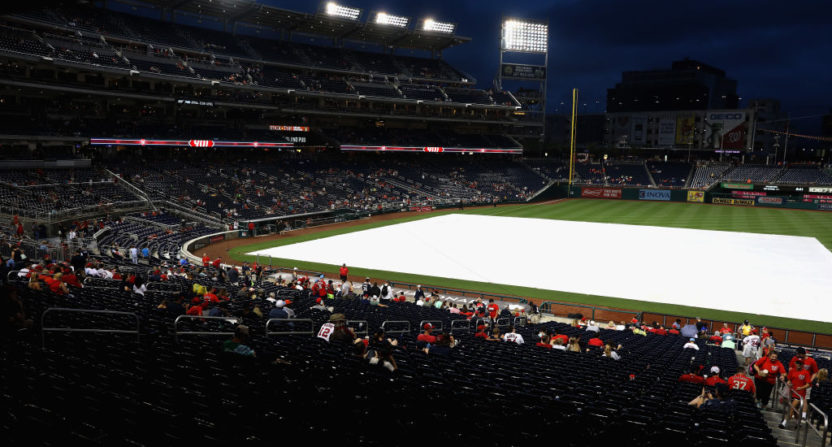 Thursday night’s Nationals-Braves game was scheduled to begin at 7:05, but with rain in the forecast, the good folks at Nats Park decided to delay first pitch. But it didn’t rain at 7… or at 8… or at 9, until finally the Nationals announced the game would begin at 10:15.

No one was particularly pleased by this saga. Fans went home, players killed time in the clubhouse, media members ate ice cream. But the least happy of anyone, by far, was the Braves’ broadcast team.

As chronicled by Dan Steinberg of the Washington Post, Chip Caray and Joe Simpson railed against the Nationals’ handling of the situation all evening, calling it “a travesty,” “pitiful,” and “unbelievable.”

Here’s an except, transcribed by the Post, from the broadcasters’ pregame musings:

“This is a travesty, this really is,” Simpson said about an hour into the delay, when the field was dry and the tarp still ensconced in its wrapper. “I hope MLB looks into this, because this is a blatant abuse of gamesmanship by the Nationals, in my opinion. As you see there’s no tarp on the field. There’s the tarp. It’s still got its cover on it. It’s not even unrolled in anticipation of any rain that, as you said, is expected to get here not until 9 o’clock, if it gets here. We could have already played five or six innings by the time the rain might get here. … This is all about the Nationals fearing they might start the game and lose Gio Gonzalez and then have the game started later and then have to go to their bullpen, which we all know is the worst in baseball. This is a horrible attempt by the Nationals to manipulate this.”

“Weather forecasting is an inexact science,” Caray acknowledged. “But if the ticket says 7:05, and there’s no rain, you ought to start the game and take your chances. It’s happened in baseball for 130 years. This, I agree with you, Joe, is pitiful.”

“It’s the age-old threat-of-rain rain delay,” Carey said. “We will probably start and play through a Category 5 hurricane, because in Nats World, that’s probably a bright sunny day.”

Here’s the diatribe in video/audio form:

The complaints didn’t stop when the game began:

“Let’s just say that they are starting to build the arc and lining up the animals two-by-two right now outside the Nationals clubhouse,” Caray said. “It’s 76 degrees, it is humid, there is light rain, I think they’re very concerned about a flood. … I’ve only seen something like this once before. You and I were talking during the non-rain rain delay; you’ve never seen anything like this.”

“Nothing,” Simpson agreed. “It should be extremely embarrassing for the Nationals. A lot of people left because we understand the Metro train system closes here at 11.”

“The folks I feel the worst for are the fans that paid their hard-earned money to come to the ballpark tonight, and expected to see a game without rain start on time, and didn’t,” Caray said. “A lot of fans made the trek from all over the Southeast to Washington to see Mike Foltynewicz pitch.”

“Boy, it doesn’t seem like we’ve been playing that long,” Simpson joked.

“Unbelievable,” Caray said. “What a night. Something else to ponder: the travel life in Major League Baseball is very luxurious, it is much easier than a standard business traveler, but it is at times not very glamorous, and last night was one of those times. The Braves had a rain delay at home, played a long game with Houston and we got to the team hotel, got to our rooms around 4 a.m. Eastern time. Tonight sat through the three-hour ridiculousness imposed on us by the Nationals, and here the Braves are in the sixth inning, going toe-to-toe with the first-place Washington club, punching, counterpunching, and giving them a great fight in the series opener.”

And in the ninth inning:

“When I came to the park tonight, if you’d told me we were still gonna be playing baseball at 1 a.m., I would have figured we were at least in the 20th inning.”

“Yup,” Caray agreed. “The game was supposed to start at 7:05. It was cloudy, there was a threat of rain, there was a cell about 30 miles away. The Nationals decided not to start the game until 10:12 Eastern time, a 3 hour and 7 minute rain delay. … And look, I’m sure that some of it was weather-related. Some of it, I think, was gamesmanship-related. I think it’s something that baseball’s got to investigate. If it’s not raining, start the game. Both teams run the risk of losing a starting pitcher. But that was not cool. That’s why I think reading the papers and the recaps of the game’s events will be very interesting once we wake up later in the day.”

TWO HOURS OF NO RAIN.

On Friday, Nationals issued an apology, saying the arrival of the storm “kept shifting.”

A message from the Washington Nationals: pic.twitter.com/xsXOBvTDyJ

Don’t expect Caray and Simpson to accept the apology.

UPDATE: This bit from Friday’s game suggests Chip and Joe have certainly not forgiven the Nats.

For those who didn’t see it pic.twitter.com/W6LfvnlE19