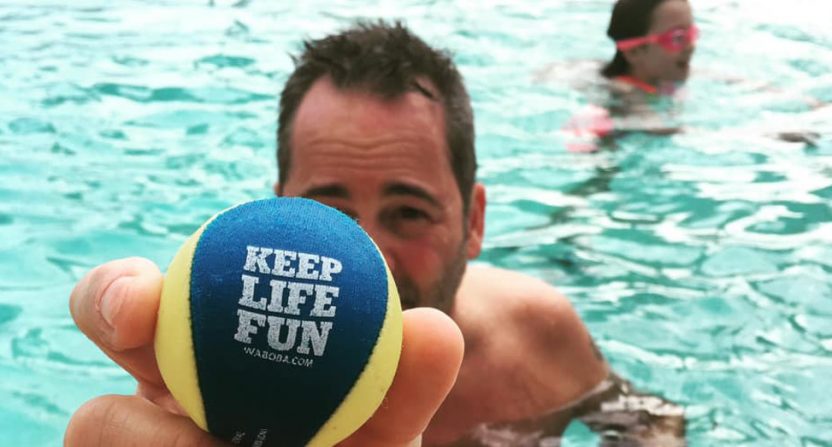 Sunday saw Emmy-winning cameraman John Martin pass away at 51, almost two years exactly after he was diagnosed with amyotrophic lateral sclerosis (ALS).  Martin had spent 19 years with NESN and had covered plenty of huge moments for Boston teams, and his friends and colleagues (as well as many prominent Boston sports figures) came up with a neat way to both recognize and support him earlier this year, stopping by his patio of “Café Martin” for regular visits and creating and selling merchandise with that name to help his family deal with medical costs.

Martin’s wife Adrienne announced his passing Monday morning, thanking the community for all their support:

John passed away peacefully yesterday, almost exactly two years from the day he was diagnosed with ALS. He was asked…

Tributes to Martin poured in afterwards, including from the Patriots, Red Sox, and Bruins:

The Patriots organization is deeply saddened to hear of the passing of NESN videographer John Martin after a courageous battle with ALS. Our thoughts and prayers are with his wife & daughters, and the entire @teamcafemartin family.

We will miss you, John. pic.twitter.com/QgfQtsvAJP

Bruce Cassidy begins his press conference by offering condolences to the family and friends of NESN videographer John Martin, who passed away this weekend after a long battle with ALS. pic.twitter.com/xCIaTCjS48

Many colleagues and other media figures also paid tribute to Martin:

We lost John Martin @tweetsbyjpm yesterday.
The best videographer I’ve ever worked with, the best youth baseball coach in Boston for a decade-plus & most important: the best husband to Adrienne @teamcafemartin & best father to his two awesome daughters.
What a man. What a fight.

John Martin passed away after a 2-yr battle w/ ALS. As a NESN photographer his joy, humor and energy was unmatched. He was equally amazing in his fight: he, his wife Adrienne & beautiful daughters showing incredible strength & grace. We will miss him terribly. RIP @teamcafemartin

Thoughts and prayers to the family of former @NESN cameraman John Martin. He touched so many lives, including mine, in his courageous and inspirational battle with ALS. The spirit of #CafeMartin will always be with those of us covering Boston sports. RIP John.

Sad to pass along news that everyone’s good friend, a wonderful, loving husband and Dad, and as pleasant a human being as I’ve ever encountered, John Martin has passed away after a hard-fought battle with A-L-S.

As I head out on my shoot today I’ll remember everything John Martin taught me. I choose to remember him as a teacher, a mentor, and a friend. He’ll live on in everything I shoot for the rest of my life @tweetsbyjpm @teamcafemartin https://t.co/WjANGVUM0T

The world lost an incredible man in John Martin. You are a light. You touched so many lives. You’ll always be “The Mayor.” Thank you for all of the fun you brought into this world, @tweetsbyjpm. Thoughts and love to Adrienne and your girls. pic.twitter.com/pkkdglyMUi

Gutted this morning to hear the news of John Martin's passing. He fought as hard as he could against ALS, smiling and laughing as it robbed him of so much. My heart goes out to his wife Adrienne @teamcafemartin and their two kids. May he watch over them from this day forward.

Today’s a tough one. There was no one quite like John Martin. ALS robbed us all of a great person. He lived more in his short life than most and I know he’s making inappropriate jokes in heaven as we speak. Be free now JPM. #cafemartin will live on pic.twitter.com/S70DOu6mJn

I am heartbroken to hear we lost John Martin.
The grace he and his family showed during their 2 year battle with ALS is a testament to his spirit and love for life.
John will be forever missed. RIP @teamcafemartin

What a life John Martin lived and what a legacy he leaves behind. Sending love to his friends and family.

Our tribute to John Martin, his text the morning after it aired was one of the most fulfilling I’ll ever have. If your timeline is full of tributes (as it should be) here’s a small glimpse into the @teamcafemartin story

Martin made a huge impact on many during his work for NESN, and he continued to make his mark on the world even after his ALS diagnosis. Bryan Brennan, another NESN cameraman who worked with Martin for a long while, told Chad Finn of The Boston Globe in May that Martin would regularly text him encouragement:

“He never lost the love of the job, or the love of the people he worked with. When you’re on the road, you’re gone for a long time and people don’t really talk to you. You’re not as friendly with the players as people think. You’re very much lonely.

“John never forgot that and always reached out. He was the one guy who on some part of the trip would check in and ask, ‘How’s everything going? Your scenics [i.e. scenes] the other day were outstanding.’

“Or he’d text me during a game to say, ‘Man, great replay you got there, perfect angle.’ And I’d think, ‘Holy cow, he’s at home watching.’ But really he’s just making sure I was doing OK on the road.”

Our thoughts are with Martin’s friends and family. There’s a GoFundMe to help his family that those interested can check out.

[The Boston Globe]; photo from Adrienne Martin on Facebook]