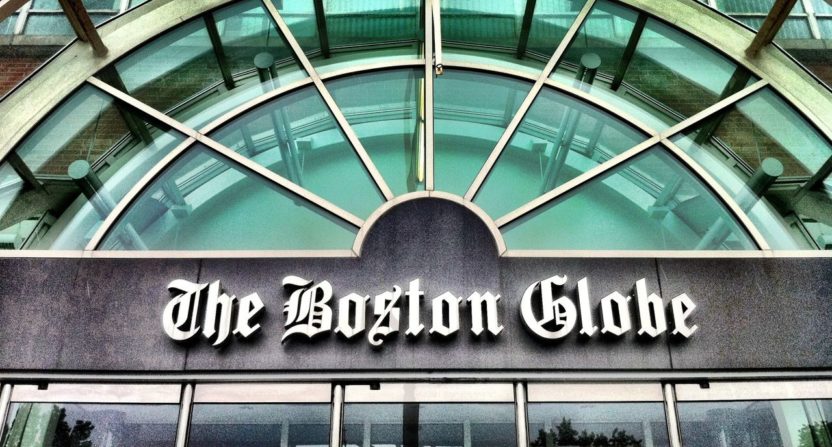 The Boston Globe has placed columnist Kevin Cullen on administrative leave after WEEI’s Kirk Minihane accused him of fabricating details of his experience at the Boston Marathon bombing five years ago.

“The integrity of each of our journalists is fundamental to our organization,” the Globe said in a statement. “In light of questions that have publicly surfaced, Kevin Cullen has been placed on paid administrative leave while a thorough examination, involving a third party with expertise, is done of his work. We will be transparent with the results of the review.”

On Thursday morning, WEEI’s Kirk Minihane spent a portion of his radio show describing how Cullen had misrepresented his experience during the famous attack. Minihane said he was told by Cullen and others that the columnist was not, as his worked seemed to imply, at the finish line when the bomb went off but that he had arrived three hours later.

As WEEI points out, passages such as this one, from a piece published last weekend in honor of the marathon’s fifth anniversary, heavily suggest Cullen was on the scene:

I happened upon a house fire recently, in Mattapan, and the smell reminded me of Boylston Street five years ago, when so many lost their lives and their limbs and their sense of security.

I can smell Patriots Day, 2013. I can hear it. God, can I hear it, whenever multiple fire engines or ambulances are racing to a scene.

I can taste it, when I’m around a campfire and embers create a certain sensation.

Although it’s possible that Cullen could have arrived hours later and still smelled/heard/tasted the aftershock of the bombing, this excerpt from his column published a day after the bombing pretty clearly suggests he was present:

And so it was alternately poignant and horrifying to watch as first responders frantically pulled metal barriers and the flags of so many different countries down into Boylston Street in a desperate rush to get to the dead and the injured on the sidewalk.

Those flags looked like victims, splayed on Boylston Street as the acrid smoke hung in the air.

After the initial explosion, runners instinctively craned their necks toward the blast site. Then, 12 seconds later, a second explosion, further up Boylston. It was pandemonium. I saw an older runner wearing high rise pink socks, about to cross the finish line. He was knocked to the ground by a photographer running up Boylston Street toward the second explosion.

And there’s more. According to WEEI, Cullen made up significant details in a story he told on BBC in the aftermath of the bombing.

He says Bill Richard, the father of eight-year-old Martin Richard, who tragically lost his life in the bombings, ran the Marathon in 2013. According to Cullen, Martin Richard greeted Bill Richard at the finish line and returned to the barriers behind the sidewalk while his father registered his time.

Only that Bill Richard did not run the Marathon that day, and you don’t have to register your time at the finish line.

Worse, Cullen details that his friend, a firefighter “Sean,” was the one who saved Bill’s daughter Jane, who lost her leg during the bombings. That was in fact Matt Patterson, an off-duty firefighter from Lynn who carried Jane Richard to an ambulance. Patterson says he has never spoken to Kevin Cullen in his life.

Cullen has not commented publicly on the allegations against him, but the Globe seems to view Minihane’s claims as credible enough to warrant placing the columnist on administrative leave.