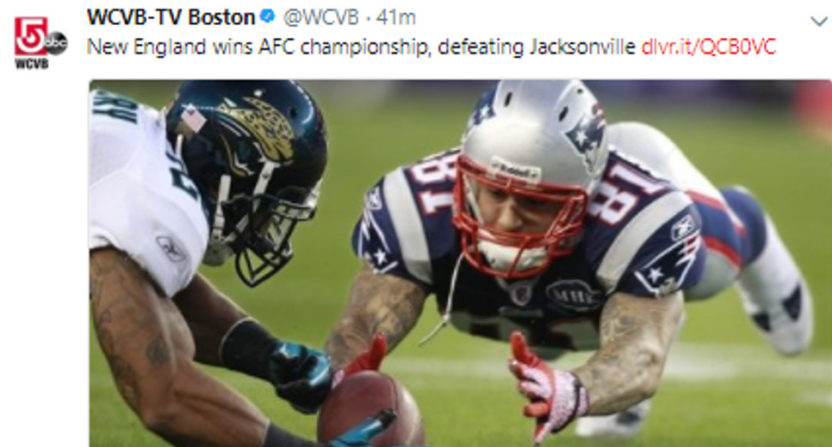 Using old photos for current news stories sometimes causes problems, and boy, did Boston ABC affiliate WCVB find that out Sunday. When tweeting their story about the New England Patriots’ AFC championship win over the Jacksonville Jaguars, they tweeted an old photo of a Patriots-Jaguars game that included Aaron Hernandez diving for a ball. (Update: they’ve since deleted it, but you can see it above.)

Considering that Hernandez only played for the Patriots from 2010-12, was arrested on murder charges in 2013, found guilty in 2015, and then hanged himself in 2017, this is definitely an odd photo choice. These teams don’t play each other that often considering their different divisions (as per FootballDB, the only game they played in the Hernandez era was in December 2012, and that’s the third-most recent game between the teams), but it’s certainly curious that a news station would use a 2012 photo about a 2018 game. (And even without Hernandez’s presence, this could be identified by the old Jaguars’ logo, or by the Patriots not currently having a player wearing #81.) And given Hernandez’s inclusion, they got roasted hard for it:

Ending was a real killer. Kept hanging in there for a while tho

Is this really the best picture y’all had? Lmao

Yeah, that’s not a great move. And it took WCVB over 40 minutes to delete it. Interestingly enough, the link goes to the Associated Press story on their site, and it has just a generic score graphic, but the old Hernandez photo somehow wound up in the tweet. Not a great look.

A news service that provides WCVB some digital content accidentally posted a pic of Aaron Hernandez in connection w/Pats AFC champ win on our social media. It's embarrassing & unacceptable. We apologize & are working w/team to correct so something like this never happens again.