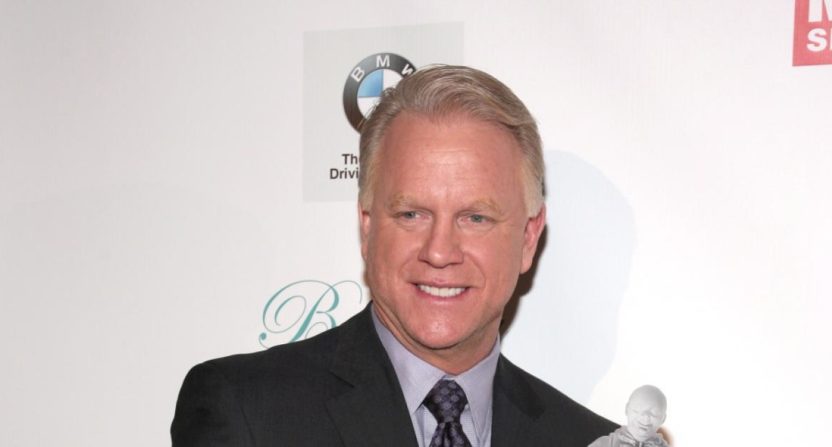 An era has come to an end for Westwood One’s national Monday Night Football radio coverage, with Boomer Esiason announcing on his Boomer and Gio WFAN radio show Monday that he won’t return to his MNF analyst role this season. Esiason had been Westwood One’s primary MNF analyst for the last 18 seasons, working with play-by-play voices Howard David, Marv Albert and Kevin Harlan, and had covered 18 Super Bowls for them as well (plus another one for ABC before that, and five where he worked for CBS as well as Westwood One). Harlan called in to Esiason’s show Monday to talk about how he’d miss working with him:

It sounds like a lot of this move was about the scheduling demands of the job. As Neil Best notes at Newsday, most weeks, Esiason would do his morning WFAN show Monday, fly to the location of the game, fly back Monday night and do another morning show at 6 a.m. Tuesday. And that’s in addition to his work on Showtime’s Inside The NFL on Wednesday nights and CBS’ The NFL Today on Sundays.

That’s a rough schedule to maintain, and it’s understandable why Esiason might feel it’s time to dial back one part of it. And this year’s Monday Night Football schedule has a lot of games in Central, Mountain and Pacific Time, making that even tougher. Esiason says to Harlan in the above WFAN clip, “I really started to feel around the Super Bowl this was probably going to be the last one for me at Westwood One. Coming back from Cincinnati last year, our last Monday game, or I think it was a Thursday game we did together, I said ‘Man, this is just getting exhausting.'”

“And then when I saw the schedule come out this year, I spoke to Howie (Westwood One Sports executive vice president/executive producer Howard Deneroff), I said ‘The schedule’s not really conducive to continue to do it any more.’ And as much as I love doing it and being a part of it, especially with you and working with you over the last eight years, I’m going to miss it, but you know, in all reality, I’ve gotta get part of my life back.”

Harlan then talks about how he was impressed with Esiason’s dedication to that tough schedule. “I was amazed every Monday night when you’d come in with that big smile and all the enthusiasm and your board’s completely and immaculately done, and you’d sit there and go through these games. And you’d never yawn, you never were tired, and I saw you drag yourself out of that booth to go catch your flight home and fly all night to get back and make your show on the Fan. And I was amazed that you did it, but the thing that was most amazing was your energy, your focus. You’re such a professional. To jump in and join you during the last eight, nine years of Monday Night Football was an honor I can’t even describe.”

Esiason is going to work one further game with Harlan on Westwood One, opening night in Philadelphia on Thursday, Sept. 6. Harlan said he’s thrilled about that, but that he’ll miss Esiason. “I’d carry you on my back to get down there, believe me. I will look forward to that. But it’s going to be bittersweet, certainly. …I don’t know that I’ve ever worked with a nicer man, a more knowledgeable guy about the business, a more honest appraiser of what’s going on. He never backed off. Just a genuine, kind, thoughtful, wonderful person that I’ve been lucky enough to work with.” (Co-host Gregg “Gio” Gianotti jumps in with a “He’s still alive, Kevin.”)

Esiason and Deneroff also had comments on this in a Westwood One release:

“It has been an honor to be a member of the Westwood One NFL broadcast team for the last 18 years,” said Esiason. “I am proud to have delivered the calls for some of the most iconic Monday Night and Super Bowl moments in the history of the NFL. With my continuing busy schedule during the NFL season, including my daily NYC-based morning drive radio show, ‘The NFL Today’ and ‘Inside the NFL’, I thought the timing was right for me to step away. I would like to thank my broadcast partners in the booth who have made the job enjoyable and fulfilling.  Also, I would like to thank Westwood One’s senior management and sales force, who, over the years, were instrumental in providing on-air support for the Boomer Esiason Foundation.”

…“Boomer has been the constant for a generation of Monday Night Football listeners, and we can’t thank him enough for his nearly two decades of service to Westwood One,” said Howard Deneroff, EVP/Executive Producer, Westwood One Sports. “He has been the ultimate professional, a terrific broadcaster, and a great teammate to all of us who have had the good fortune of working with him.”

We’ll see where Westwood One goes from here; as per Best, regular fill-in analyst Kurt Warner is “presumed to be the leading candidate” to replace Esiason, but we’ll see if they make that move or go in a different direction. At any rate, a long run from Esiason is coming to an end. That’s understandable given the time and travel challenges. It’s quite impressive that he managed to maintain this schedule as long as he did.