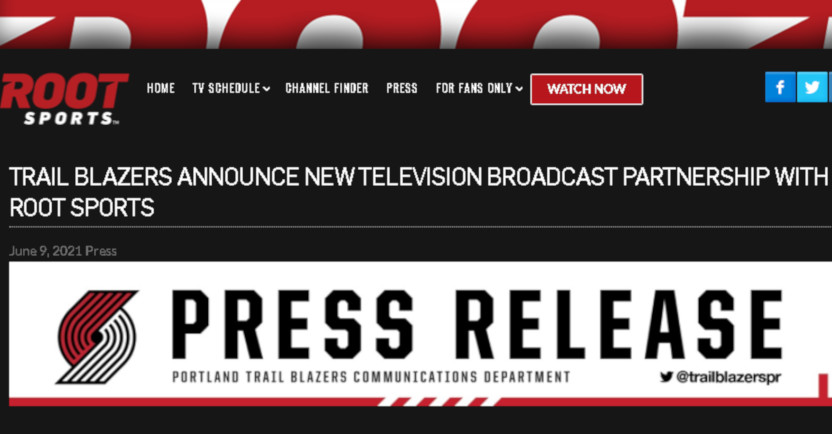 There’s been some discussion about the future of NBC Sports Northwest recently, with that network having both limited distribution (outside of parent company Comcast) and limited live rights (mostly focused on the NBA’s Portland Trail Blazers). Now, it looks like that RSN may be going down entirely with the news that the Blazers are heading to Root Sports beginning in the 2021-22 season, following the expiration of their current deal with NBC Sports Northwest. Maury Brown reported that the Blazers would make this move back in March, while John Canzano confirmed that the move was happening and added more details Tuesday, and the team itself put out an official announcement on this Wednesday. Here’s more from that announcement, including the super-fun constant capitalization of ROOT SPORTS (the network prefers that capitalization, but we’re not going to do that, because it’s stupid):

Today the Portland Trail Blazers announced a new multi-year television broadcast partnership with ROOT SPORTS starting in the 2021-22 season. ROOT SPORTS, a joint venture between AT&T Sports Networks and the Seattle Mariners, will bring Trail Blazers games to more fans than ever before across Oregon, Washington and Alaska. With fans’ accessibility top of mind, this transition will help spread the Trail Blazers roots even farther throughout the Pacific Northwest and beyond.

“We are ecstatic to join the ROOT SPORTS regional network starting next season,” said Chris McGowan, President & CEO, Portland Trail Blazers and Rose Quarter. “With so many other Pacific Northwest teams already in the ROOT SPORTS family and its broad footprint, choosing ROOT SPORTS was the best decision for our fans. We look forward to bringing Trail Blazers games to new viewers, as well as our loyal fans in Oregon, Washington and Alaska.”

…“The Portland Trail Blazers are a first-class organization, and we are thrilled to add Rip City basketball to our lineup of exciting game action,” said Mark Jorgensen, SVP & General Manager, ROOT SPORTS. “Being the home to one of the best teams in the NBA solidifies ROOT SPORTS as a premier regional sports network in the nation.”

As Canzano noted, this does come with DirecTV distribution, and Root Sports is in approximately double the households that NBC Sports Northwest was in. And it has a strong lineup of area teams, including the Mariners (who own half the network, part of why it still has the Root Sports branding after AT&T rebranded the other RSNs they had under that name), the soon-to-launch Seattle Kraken, and the Portland Timbers. So its carriage is likely to be decent for some time to come. As with many RSNs, though, its availability in streaming-TV packages is limited; it’s only currently available in AT&T’s streaming packages. And that’s one downside to this shift; NBC Sports Northwest did have more deals with streaming-TV providers, including with Hulu’s live TV option,  YouTube TV, and fuboTV.

This deal is going to be for four years, and run through the 2024-25 season, as per Joe Freeman of The Oregonian. Freeman cites 2 million homes for Root Sports versus 1.1 million for NBC Sports Northwest in the Northwest area, and notes that Root is also currently available in Idaho, Montana and Alaska, reaching 500,000 homes there.

As for NBC Sports Northwest, Freeman writes that they’re going to fold, and that makes sense. That network was founded (in 2007, as CSN Northwest) to carry Blazers’ games, and the Blazers were their key property. Most other Northwest teams have already signed with Root. The main non-Root professional teams in the area, the Seattle Sounders and Storm, both have local deals with Fox-owned MyNetworkTV affiliate JoeTV (with the Sounders’ local games also available through streaming on Amazon Prime). So there isn’t a whole lot that would seemingly keep that channel in business, especially as it was already having distribution struggles while it had the Blazers.

One big thing to watch going forward may be if Root is able to get distribution on more streaming TV services ahead of the next Blazers season. There’s certainly a demand for streaming Blazers’ games; in fact, they were the first team on a NBC RSN with selected-game packages offered completely over the top through Blazers Pass on NBC Sports Gold. And while their NBC Sports Northwest deal had severe drawbacks for those who couldn’t get that channel on DirecTV, Dish or other traditional providers, it did come with more streaming agreements than Root currently has. We’ll see if that situation changes by the fall.

[The Oregonian; photo from Root Sports]