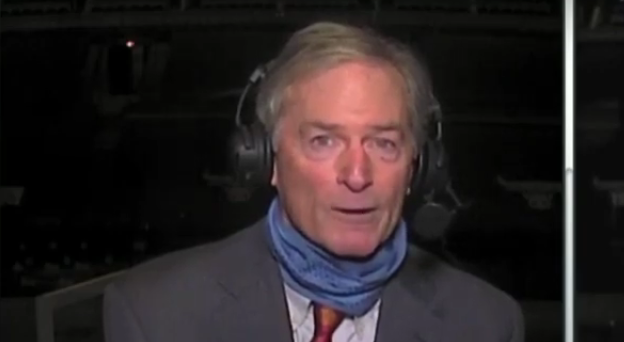 There have been plenty of remote local broadcasts over the last year-plus due to pandemic restrictions, and a comment on that setup from long-time Chicago Blackhawks’ play-by-play voice Pat Foley Monday night drew a lot of backlash. Like many announcers, Foley has been calling road games remotely from Chicago this season due to pandemic protocols, and he said on Monday night’s season finale broadcast on NBC Sports Chicago that he was happy with the remote broadcasts because it meant he didn’t have to endure the road pandemic protocols the team went through. But Foley’s graphic word choice and explicit suicide reference sparked a whole lot of backlash. Here’s what Foley said, and how he later apologized, via Phil Rosenthal at The Chicago Tribune:

Foley, who called Hawks road games on NBC Sports Chicago remotely from Chicago rather than travel with the team this season, per NHL pandemic protocols, said he would have struggled to adhere to restrictions imposed on players and personnel on the road.

“Had I been traveling with the team this year, I might have put a bullet in my head,” Foley said.

Some viewers registered shock at the imagery via social media, and within minutes, Foley responded.

“I wish I didn’t say that,” Foley said. “I’m sorry if I offended some folks. Apparently I did, so I apologize.”

Foley has been calling Blackhawks’ games on radio and TV since 1981, albeit with a two-year gap for the 2006-07 and 2007-08 seasons following “a rift with management.” He also called NHL on Fox games in the 1990s, and was given the Hockey Hall of Fame’s Foster Hewitt Memorial Award in 2014. As Rosenthal’s piece notes, Foley previously drew flak for an on-air comment in 2019 where he said that Eisbaeren Berlin player Austin Ortega “sounds like a shortstop.” There, Foley only apologized two days later, and only through a statement from the team, so the quicker on-air reaction and correction here is an improvement. But “I’m sorry if I offended some folks” still isn’t much of an apology.

It’s somewhat understandable how Foley got there. Playing a season under pandemic restrictions can be frustrating and challenging, as many players have expressed. And Foley’s sentiment about appreciating calling games remotely this season could have been fine if he’d worded it differently. But his word selection here was terrible, especially in a league that’s made some progress on helping its players through mental health challenges, and on a network that has otherwise tried to emphasize a commitment to mental health. And it’s been pretty clear in sports recently that light-hearted suicide references aren’t acceptable. Foley is paid to pick the right words, and he could have done much better here.

National Suicide Prevention Lifeline resources can be found at 1-800-273-8255, or at suicidepreventionlifeline.org.