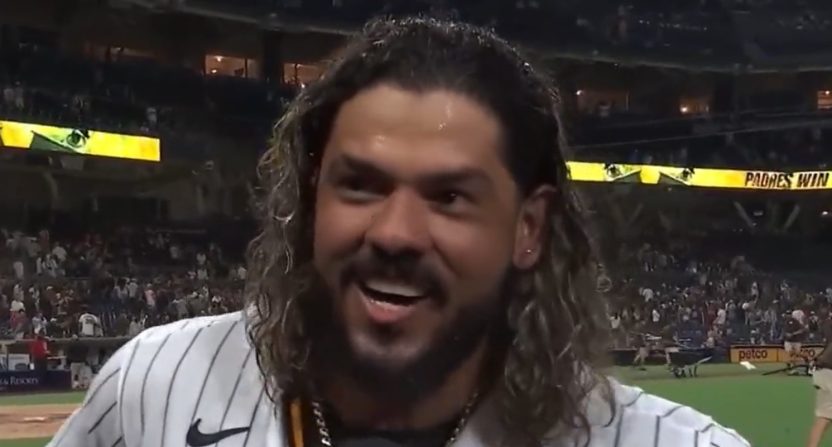 No matter how many times you hear an f-bomb or utter one yourself, there is still something special about one getting dropped on live TV.

Thursday night, Bally Sports San Diego gave us a big one during Jorge Alfaro’s postgame interview. And either the network wasn’t paying attention or they just didn’t mind letting the f-bomb out over the air, because they had to know it was coming.

Alfaro walked it off Thursday night, as the San Diego Padres catcher notched his second game-winning hit in as many weeks. The last time Alfaro came through with a game-winner, he fired up his teammates and the crowd with a “let’s f*cking go San Diego” during his on-field interview. With that in mind, what might Alfaro say this time?

“How about your teammates right here?” field reporter Annie Heilbrunn asked Alfaro during his postgame interview. “They’re all watching you, they’re throwing things at you, what can you say about this group that has stayed out of the clubhouse to come watch you right now?”

Alfaro’s teammates were curiously standing on the top step of the dugout, almost as if they were expecting Alfaro to say something. “Why would they do that?”, as Brian Windhorst might ask.

“I think they’re waiting for something,” Alfaro said before a brief pause. Then he gave the fans and his teammates what they were waiting for. “LET’S F*CKING GO SAN DIEGO!”

No fucks given part 2 ?? pic.twitter.com/wWnYy7VVoK

And they were hyped. “What more can you say after that?” Heilbrunn added.

Everyone was waiting for it. We mean EVERYONE. pic.twitter.com/owWJwJWPjO

In 2019, Pete Alonso rallied Mets with “LFGM!” a phrase he continues to use during on-field interviews in front of the crowd. MLB seemingly hasn’t had an issue with the more PG form of the f-bomb, but they might not love the Padres rolling with the less judicious “let’s f*cking go San Diego” if that becomes their mantra for the rest of the season.

But it’s occurring after 10:30pm on the West Coast during a baseball game. Just let Bally Sports San Diego and the Padres give the people what they want.