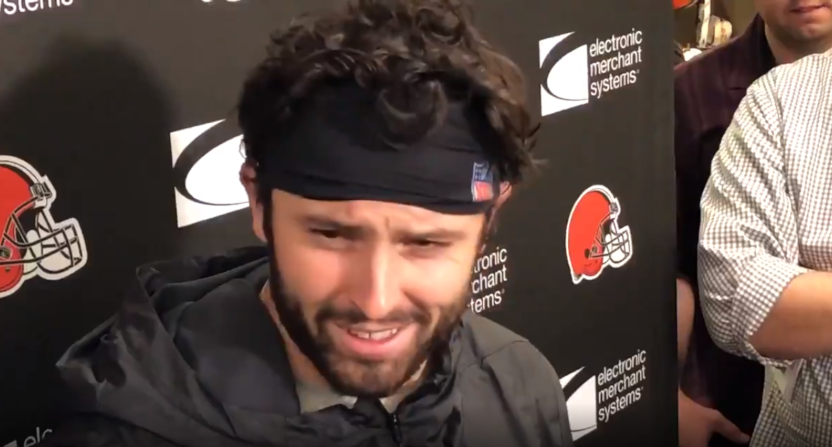 The latest installment of Cleveland Browns’ quarterback Baker Mayfield versus media figures comes not against long–time foe Colin Cowherd, but rather ESPN Cleveland’s Tony Grossi. Grossi, the ESPN 850 Cleveland and SportsTime Ohio figure (and regular ESPN.com contributor) previously seen around these parts when he accused ESPN’s Bill Barnwell of secretly consulting for the Browns (in an ESPN.com piece, no less) back in 2017, asked Mayfield Wednesday about a drive that stalled in the Browns’ loss to the Patriots Sunday.

Mayfield didn’t like the way Grossi interrupted him or the question he asked, and that led to this exchange and to Mayfield walking out:

Baker Mayfield got into a heated moment with a reporter and walked out of his weekly press conference. #Browns pic.twitter.com/lSGxos3Ce8

The clip starts with Mayfield saying “The penalty happened and” and Grossi interrupts with “The clock’s not running.” Mayfield goes “No, no, no, stop saying but. I just told you the clock was running and we have a penalty. You want to give them the ball back? No. You don’t play, you don’t know. It’s just plain and simple.” Grossi then asks “Were you happy with that drive?” and Mayfield goes “Was I happy with that drive? No, we didn’t score points! That’s the dumbest question you could ask! What?!” He then walks out.

say that I’ve gotten complacent. My sense of urgency is at an all time high. And if I offend anybody along the way… that’s too bad

It’s possible to see a bit of both sides’ perspectives here. It’s not unreasonable for Mayfield to be annoyed with Grossi interrupting him mid-answer, and he certainly doesn’t have to be happy with every question he gets. And Grossi has created some controversies over the years, including getting himself reassigned off the Browns beat by the Cleveland Plain Dealer back in 2012 for inadvertently sending a tweet criticizing then-Browns’ owner Randy Lerner as “a pathetic figure” as a tweet rather than a direct message; that led to him leaving the paper and joining the radio station a month later. There’s also the 2017 case of Grossi claiming that the Browns “are outsourcing major decisions to a football analytics columnist and podcaster with no practical experience in football scouting, coaching or team-building” because one of their moves followed something Bill Barnwell once said.

Grossi isn’t the most popular figure for many in Cleveland, and it’s funny that this has already led to a t-shirt:

However, this also maybe isn’t the best look for Mayfield. Being a sports figure means dealing with people you don’t like and getting asked questions you think are dumb, and “Were you happy with that drive?” is far from the most unusual or the dumbest question out there. It’s a question asked quite a bit in football, and many quarterbacks would just respond with something like “Well, we did some good things on that drive early, but the way it ended wasn’t the best.” Mayfield’s response also isn’t quite accurate, as it’s certainly possible to be happy with a drive that didn’t lead to points if it significantly flips field position.

Of course, there are more factors going into this, especially given Grossi’s previous interruption and the previous interactions between the two. And Mayfield’s frustration may have been more about the whole encounter than the specific question, and there’s maybe some merit to that. But the specific question didn’t seem to deserve the particular vitriol Mayfield responded with, and walking out of the press conference is going to draw more criticism for him. He certainly can do that if he wants, but there are some times where it might be simpler to just answer the question. Even if you think it’s a dumb one.