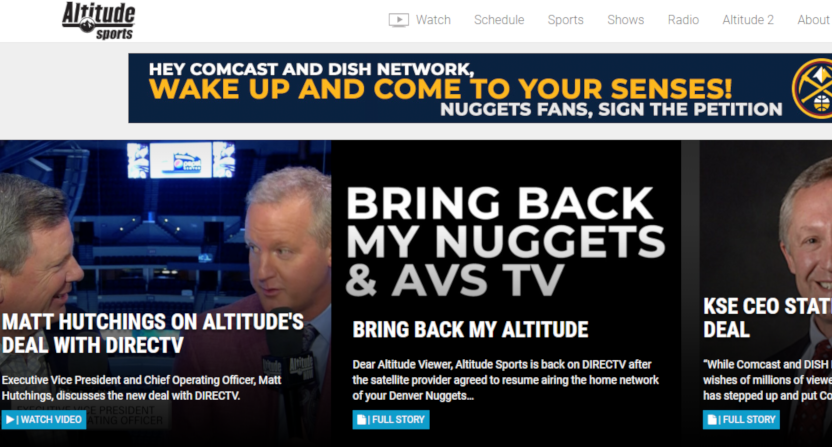 The carriage dispute between Colorado regional sports network Altitude (owned by Stan Kroenke, who also owns the Denver Nuggets, the Colorado Avalanche, the Colorado Rapids and the Colorado Mammoth, it carries those teams’ games and more) and Comcast has now escalated to a lawsuit from Altitude. Back in September, Comcast, DirecTV, and Dish all dropped Altitude, but the AT&T-owned DirecTV struck a carriage deal for the network at the end of October. That came right after Colorado attorney general Phil Weiser announced that his office was looking into if DirecTV and Comcast were violating the Colorado Consumer Protection Act by charging a regional sports fee for a blacked-out channel. However, there’s been no progress on the Comcast or Dish fronts.

Comcast said they would cooperate with the AG and that they were already giving customers “a partial credit for the regional sports fee,” but they still haven’t signed on to carry Altitude again. And now, Altitude has filed an antitrust lawsuit against Comcast. Here’s more from Kyle Fredrickson of The Denver Post:

…The 45-page document alleges that Comcast “wants to extinguish competition from Altitude so that Comcast can pocket more of the money it takes from consumers each month for sports programming.” Altitude also claims that proposals from Comcast during stalled-out negotiations to broadcast Nuggets and Avalanche games “make no economic sense unless Comcast’s aim is to use its monopsony power to eliminate Altitude so that Comcast will control sports programming” in Colorado, Nebraska and Wyoming.

The lawsuit also includes details on some of the renewal options Altitude provided Comcast:

Comcast responded with this statement:

The competition argument is at the heart of this, and there are several things going on there. Comcast is correct that they don’t currently have a regional sports network in the Colorado area; they own the seven NBC Sports regional networks, and none of those have geographical overlap with Altitude. The network that does is AT&T SportsNet Rocky Mountain, which carries games from the Colorado Rockies, Utah Jazz, Vegas Golden Knights and more. But there are two quite possible scenarios where Comcast could wind up having a Colorado RSN.

First, AT&T has been “weighing” a sale of their regional sports networks, and Comcast has been mentioned as a potential bidder there. And AT&T SportsNet Rocky Mountain might be particularly interesting for them given their cable penetration in the area; the Denver Post mentions that they’re the largest television distributor in Colorado, and The Washington Post says they provide cable service to more than half of the homes in Denver. (This also weakens Comcast’s argument that “Altitude has multiple distribution alternatives”; yes, they do, but those alternatives are nowhere near the scale of Comcast.) So Comcast could quickly go from having no RSN in Colorado to having one in direct competition with Altitude. Or, alternatively, as the lawsuit mentions, they could theoretically drive down the value of Altitude and then “purchase Altitude at a deeply-discounted rate.”

Of course, none of that means that this Altitude lawsuit is going to be successful. Future competition from a potential Comcast RSN is much less clear-cut than competition from an existing RSN. And one possible defense Comcast has is that they’re not the only one refusing to carry Altitude; Dish is still in that situation, too. (Although, the counter there is that Dish is refusing to carry a whole lot of RSNs these days, while Comcast obviously carries their own RSNs and is carrying a lot of the Sinclair/former Fox RSNs in other markets.) But one argument Altitude has is that they’re now again carried on DirecTV, which has an obvious competing network in AT&T SportsNet Rocky Mountain; if they can strike terms with a company that has a clear direct competitor to their programming, it’s certainly interesting that they can’t work out a deal with Comcast, a company without an obvious direct competitor to what they have.

At any rate, it will be interesting to see how this lawsuit goes, and if it winds up getting anywhere. It’s certainly a notable move in the Altitude-Comcast fight. And this whole situation goes to show the tough times out there for regional sports networks. Those times perhaps get even harder when you’re running an independent RSN like Altitude, which doesn’t have other RSNs or non-RSNs (like Sinclair-owned local stations or NBC owned-and-operated local affiliates) to leverage in distribution deals.