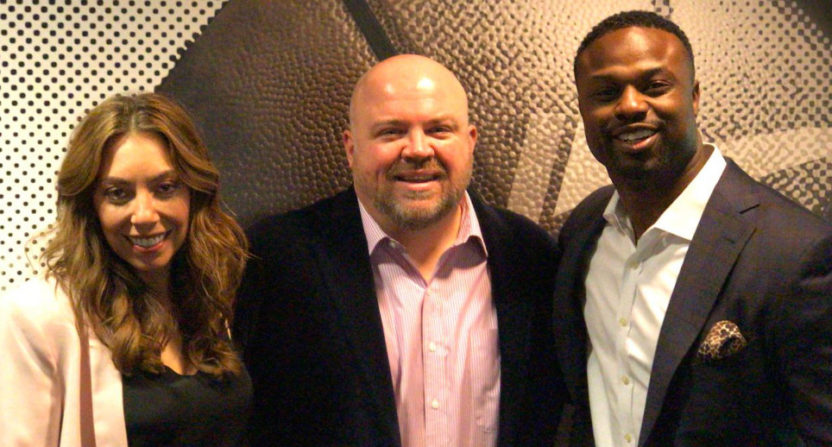 There isn’t going to be much of a gap between Mike Francesa’s final WFAN afternoon show Friday and the first show of the trio replacing him. Newsday‘s Neil Best reports that Chris Carlin is set to start hosting Monday, and that co-hosts Maggie Gray and Bart Scott will join for at least some of that time, despite their show not officially launching until January.

Chris Carlin is scheduled to work all five weekdays next week, and is expected to be joined for at least some of those shifts by Maggie Gray and/or Bart Scott, his teammates for the new afternoon show that officially launches on Jan. 2.

The week of Dec. 25 presumably will feature fill-in hosts in that time slot.

It seems like a logical move from WFAN to bring the new afternoon voices in bit by bit, rather than either fully launching the new show (formally titled “The Afternoon Drive with Carlin, Bart and Maggie”) immediately and having it directly compared to Francesa’s show or waiting to do anything until January. And Carlin is the most standard figure here and the most recognizable to listeners; he was a long-time WFAN producer (including for Mike and the Mad Dog), then an overnight and early-morning host and morning update anchor before moving over to SNY and then joining Philadelphia’s 94.1 WIP last November.

Establishing him in that slot may help to smooth the transition, and introducing Gray (formerly of Sports Illustrated and CBS Sports Radio) and Scott (the former New York Jets’ linebacker, CBS analyst, and ESPN New York personality) in smaller roles ahead of the new show’s official launch may also help provide a look at what to expect on WFAN in January. They all spoke to Best last month, and offered some thoughts along those lines:

“When the call came it took about five seconds to say yes,” said Carlin, who had been at WIP in Philadelphia. “It’s New York and it’s home and it’s an incredible opportunity.”

Gray, who grew up in Binghamton, said getting the job “is totally shocking to me, and it’s all sinking in now.” She said she would offer her own points of view but was pleased a woman’s voice now will be included.

“It’s kind of a different time,” she said on the air. “Women are having a seat at the table now . . . Obviously, this is a big platform. I’m not scared of it. I’m ready for it.”

Scott joked that the “street cred on this station just went up” with his arrival.

It’s going to be awfully hard to fill Francesa’s shoes, given his 30-year run at WFAN and his legions of loyal listeners. Any replacement plan was going to take some criticism, and this one already has. But WFAN’s approach here seems like a smart one; the critics looking to immediately bash the new show in comparison to Francesa won’t be able to comment on the fully-formed version until Jan. 2, while Francesa listeners wondering if they should keep tuning into WFAN afternoons will be able to get at least an idea of what Carlin, Gray and Scott will be like on air together. We’ll see how it goes, and how well they do in Francesa’s slot.