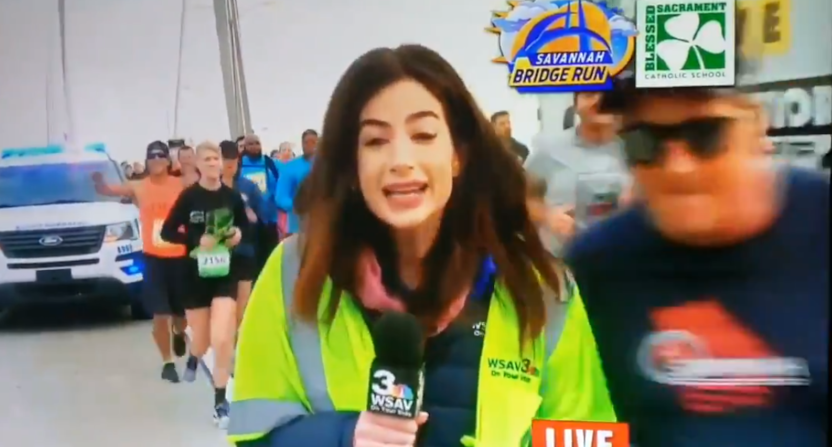 There have been plenty of cases of people behaving poorly towards female reporters on the streets, and the latest case comes from a race in Savannah, Georgia. Alex Borzarjian (a reporter for Savannah NBC affiliate WSAV) was covering the annual Savannah Bridge Run Saturday and doing a live shot with runners passing by in the background, and one of them decided to slap her on the butt. Someone posted video of that to Twitter, and Borzarjian commented on it:

To the man who smacked my butt on live TV this morning: You violated, objectified, and embarrassed me. No woman should EVER have to put up with this at work or anywhere!! Do better. https://t.co/PRLXkBY5hn

That led to a whole lot of repercussions, including Savannah Sports Council director Robert Wells telling Bozarjian the incident was “100% unacceptable” and with the organization making the decision to ban the racer involved (later identified as Tommy Callaway) from all of their future events. On Tuesday, Bozarjian appeared on CBS’ national show CBS This Morning, and discussed how she’d like to see things change after this:

"It's not okay to help yourself to a woman's body just because you feel like it… in order to make any kind of change, you have to be a little bit drastic. And you have to… chip away at this toxic culture that permeates our society." — @WSAVAlexB pic.twitter.com/tYsvu0uFiW

Bozarjian also said there “He took my power, and I’m trying to take that back. …I think what it really comes down to is that he helped himself to a part of my body. …I would say the reason why maybe it caught so much fire is because the emotion is extremely relatable for women all over the world.” She filed a police report Monday. Meanwhile, Callaway has lawyered up, and released statements through his lawyer such as “While we regret the situation, Mr. Callaway did not act with any criminal intentions. Tommy is a loving husband and father who is very active in his community” (because his work with youth groups and the Boy Scouts totally cancels his behavior here!). At any rate, regardless of he faces criminal consequences for this or not, Callaway has certainly achieved a level of public infamy as a result of this.

Who else will benefit from Amazon's TNF deal with the NFL?