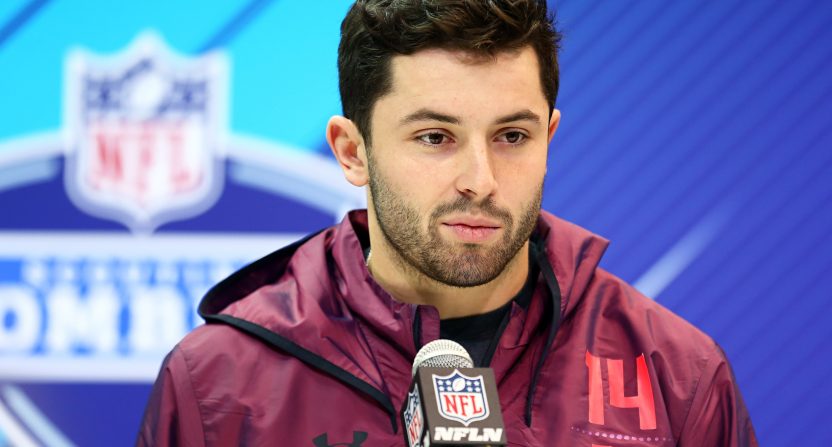 At least until Wednesday or Thursday, most NFL Draft observers thought the Cleveland Browns would take USC quarterback Sam Darnold with the No. 1 overall pick. Others thought maybe Josh Allen or Saquon Barkley was in play. Almost no one, however, expected Cleveland to grab Oklahoma signal-caller Baker Mayfield.

In fact, ESPN Cleveland radio host Aaron Goldhammer was so confident Mayfield wouldn’t be the pick, even as reports snuck out that he would, that he promised on air Thursday that he would “eat horse poop” if the Browns selected the Heisman winner.

And well, you already know the rest. The Browns took Mayfield first overall, and now Goldhammer has a promise to live up to.

The world is going to quickly learn the name “Aaron Goldhammer” from @ESPNCleveland. pic.twitter.com/apgvZDrlo7

We have seen writers and radio hosts promise to eat columns, lick buildings, personally apologize to thousands of fans and on and on. But eating literal manure might be a new one.

Goldammer seems pretty serious about following through, however. At ESPN Cleveland’s draft party, the host declared, with an odd tone of triumph, “I will eat the poop live on air,” while a colleague explained that the act would take place next week, presumably after the station procures some horse poop.

HINT: He is a man of his word. #WorstToFirst pic.twitter.com/XFNns1Q6QA

We have now officially seen it all.