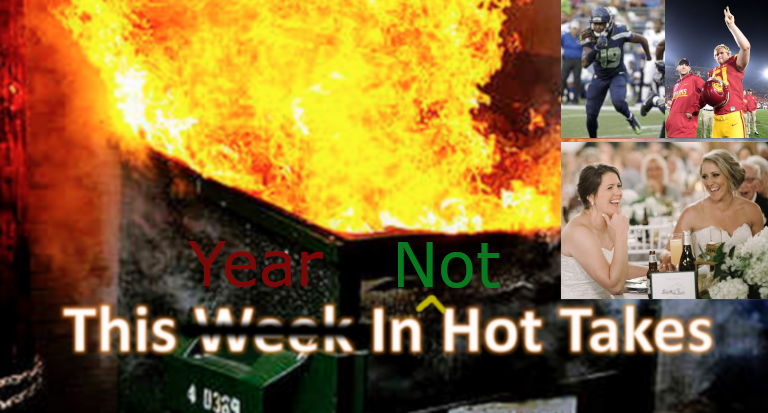 Every Friday, my husband, Andrew Bucholtz, gets up early to write about that week’s hottest takes. I do not envy him for this task. I can’t imagine the intestinal fortitude needed to sift, every week, through the worst of the worst of sports hot takery. Having to (and I can’t emphasize this enough) weekly contemplate the existence of Skip Bayless and Colin Cowherd seems like a brutal, Sisyphean task.

Try explaining Jason Whitlock or Stephen A. Smith to a non-sports world, non-extremely online person, though. You will sound like an absolute lunatic. I know, because I’ve tried with my extremely not into sports boss. “Your husband does what now?” “Well…” and I look to the heavens praying to be lifted from my spot so I don’t have to try to justify the existence of some of these people.

In an effort to counteract the awfulness of the weekly hot takes, and give my husband a break, I am taking over hot takes this week. And instead bringing you “These are absolutely good things, Bront” with the stories from this year that brought us joy and made us go “awww.”

This list is not at all unbiased and will feature teams/people I actively root for. I’m sorry. (I am not sorry. That was a reflexive sorry. He’s the Canadian one, not me. I do everything with unabashed American not giving a f*ck.)

So let’s dive into the some of the best of the sports world in 2018:

I know that whatever 2019 brings, it is guaranteed to bring us many more amazing sports moments, both good and bad. The hot take artists will be back in this space next week, but I’ve enjoyed this foray into what makes sports wonderful instead of intentionally terrible. It’s helpful to remember how amazing and beautiful sports are, how much fun and silly they can be, how much they both do not matter at all, and yet also matter so completely. These stories happen in and around sports and make it worth tuning in, unlike the hot takes.

View all posts by Lisa Bucholtz