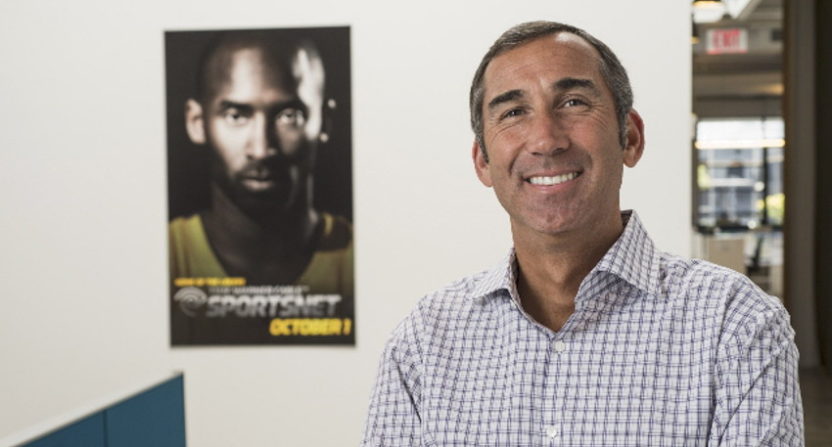 The Pac-12 Networks have a new president, and it’s someone with experience in perhaps the most crucial area facing the network; distribution. The new president is Mark Shuken, who most recently oversaw Time Warner Cable’s Los Angeles-based regional sports networks, which come with their own distribution disputes. Shuken (seen above) has also worked for DirecTV, Liberty Media and Fox Sports, and Pac-12 commissioner Larry Scott thinks his experience will be valuable:

“It’s hard to imagine someone who has more experience in this space,” Scott said. “He’s worked for distributors like Time Warner Cable and DirecTV, so he certainly understands the mindset, dynamics and culture in those types of companies.”\

…Scott said he started considering Shuken following a referral from a mutual friend, who is a top Fox Sports exec. Scott said he is especially excited at Shuken’s already existing relationships with Pac-12 schools, particularly ones in areas where he has run RSNs, including the Pacific Northwest and Southern California. Shuken left TWC’s sports division last fall, a few months after Charter’s $65B acquisition.

Distribution is perhaps the biggest challenge facing the Pac-12 Networks, as long after their 2012 launch, they still don’t have a deal with DirecTV. The networks have been profitable, but not on the same scale as the Big Ten or SEC Networks. And the Pac-12’s linear deals haven’t been as strong either; a January analysis had them making $29.3 million per school in rights fees overall for 2015-16 fourth amongst power conferences (behind the Big Ten, the SEC and the Big 12). And that gap’s only going to widen with the Big Ten’s new deal. The conference needs strong network revenues to have any hope of staying on the same playing field, and those are currently limited by their lack of carriage.

The larger issue isn’t necessarily who’s helming the network, though, but rather, the demand (or lack thereof) for it. Back in 2012, DirecTV gambled that there weren’t enough diehard fans demanding the Pac-12 Networks to cause significant subscriber loss, and so far, they’ve generally proven right. Yes, some people have undoubtedly switched, especially after no deal was forthcoming, but DirecTV seems to be doing just fine. And they have a lot of the leverage at the moment; they don’t particularly need the Pac-12 Networks, but the networks need them. And the network’s in a difficult spot, as the $0.80 per-subscriber fee they agreed upon with Comcast and Time Warner executives isn’t going to work with DirecTV, but a lower deal would probably require them renegotiating their existing contracts as well. That’s why the Pac-12 Network issues weren’t really previous president Lydia Murphy-Stephans’ fault, as Jon Wilner wrote in April:

Murphy-Stephans is Example A of the need for context.

The dominant story of her four-year tenure is the Pac12Nets inability to land a carriage deal with DirecTV, and yet the circumstances that made a deal so difficult to achieve were in place before she became president.

(And by circumstances, I mean the in-market subscriber fee of $0.8 that commissioner Larry Scott and execs from Comcast and Time Warner agreed to back in the spring/summer of 2011.

(That price point was too steep for DirecTV, and market demand, or lack thereof, has thus far proven DTV correct.)

There are larger issues at the Pac-12 Networks, and they’re not just about fan demand. Part of the problem is that the networks don’t have a linear network partner (unlike the Big Ten Network with Fox, or the SEC Network with ESPN), which can not only lead to efficiencies in on-air personnel and production, but also makes carriage discussions earlier. Other issues include that the network often hasn’t carried that great of games when it comes to football (part of why the Pac-12 linear deals are better than you might expect), and that the regional network structure has led to some issues for basketball fans.

None of that’s necessarily dependent on who’s at the top. Maybe Shuken can help turn things around, and help to appease conference athletic directors’ worries. Maybe he can even get the networks on to DirecTV, which would solve their biggest issues. Still, that’s far from a certainty. The Pac-12 Networks appear to have big challenges ahead, regardless of who’s at the helm.

Update: Shuken spoke to Cablefax’s Alex Silverman Monday, and had some interesting comments about DirecTV:

“To me, there’s a benefit there in that I understand what DirecTV’s overall objectives are, economically and serving their customers,” he said. “So, I hope that will help in the dialogue.” He added, “DirecTV has openly and clearly positioned themselves as the place for sports fans. Given that, one would assume that with the right conversation and the right business relationship, both parties will be served well—all parties: the fans, the alums, the member universities and DirecTV subscribers—by us getting something done.”

The obvious question, of course, is why we should expect him to get a deal done now when he couldn’t at SportsNet LA. Asked just that, Shuken pointed to his track record of successful carriage deals prior to the Dodgers channel.

“We’ve had tremendous success with multiple networks that I’ve run for Fox, for Cablevision, for Liberty and indeed for Time Warner Cable when we had the Lakers network launched,” Shuken said. “I think the Dodgers network was certainly a struggle, but there were some really specific timing and financial elements that I think played into that difficulty.”

So, he certainly recognizes the importance of DirecTV, and seems higher on the chances of a deal than predecessor Murphy-Stephans was when she spoke to Silverman in June. We’ll see if he’s able to work out a deal.