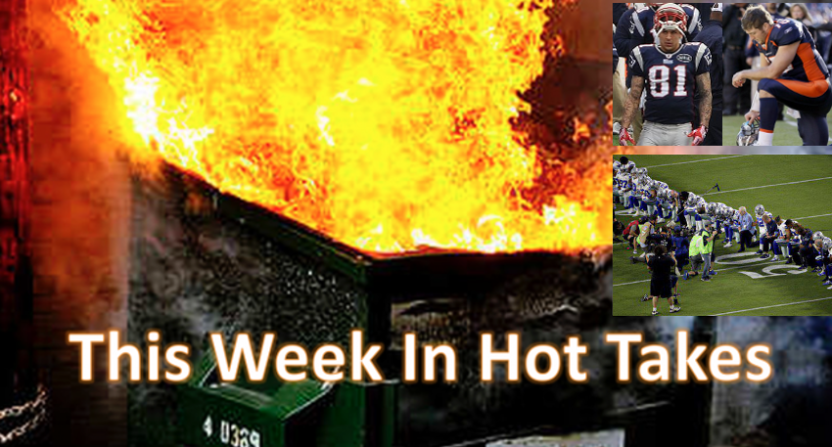 Welcome to another edition of This Week In Hot Takes, this time examining the hottest sports media takes from Sept. 22-28.

5. Charles Barkley says players are “wasting time about kneeling”: Barkley had plenty of hot takes this week on anthem protests, first appearing on CBS’ The NFL Today Sunday (for some reason). While there, he criticized President Trump’s language towards protesting players, but then weighed in with his own anti-protest take:

“He’s the president of the United States, but let me say this. We as players got to figure out what to do next. We got to stop worrying about who’s kneeling, who’s not kneeling. We got to figure out how we can go back in our communities and make a difference. We can’t be saying negative things on Twitter. That only escalates … the stupidity. These guys, myself included, we make more money than 99.9 percent of the people in the world. We’ve got to find a way to go back in our communities and raise up our communities. Let’s not worry about who’s kneeling and things like that.”

On Monday, Barkley went even further in an appearance on The Dan Patrick Show (starting around 4:50):

“The media has totally hijacked this conversation about who’s kneeling, who’s not kneeling, who’s holding their fist up. I forgot why these guys are doing it. Until the players realize, we’ve got a lot of power. We’ve got to use that power in a positive way. Don’t let the media have us calling, yelling, arguing and screaming. We’ve got a lot of power, and we can really go in ourselves, and number one we can get in with some of these teams now, cause they feel pressure too, and go into some of these communities and do a lot of positive stuff. Don’t worry about what the president says. Don’t worry about what the politicians are doing, because they’re not doing anything. But the players, we’ve got so much money now, we’ve got so much influence. We need to take a progressive approach and go into these communities ourselves and try to make a difference.”

Barkley goes on to say “I would stand for the national anthem personally, but I don’t ever tell anyone how to protest, especially if they’re peaceful. If they’re peaceful that’s the right way to go.” But he really is telling players how to protest here, criticizing sideline demonstrations and saying they should instead do community work (something that many, including Colin Kaepernick himself, are already doing). And he goes on from there to blame the media (which he, as a Turner Sports analyst and as someone who even hosted a show on race this summer and gave Richard Spencer a platform, is definitely a part of):

“That’s why the players have got to be smarter. They’ve got to understand the media is not our friends. We’re going to spend all our time today, and probably for the rest of the week, talking about kneeling and being unpatriotic to the flag. That’s not the thing. What are we protesting for? We’ve got to realize. Don’t let the media make all this money, because they’re on TV and radio 24/7 talking about who’s kneeling and people calling in and arguing for four hours at a time, but what are they arguing about? That’s the most important thing.”

“The players have got to say, ‘what can we do collectively?’ Let’s don’t worry about the president, let’s don’t worry about the media. What can we do individually? We’ve got so much money and so much power now, first of all, these owners have got to stick with the players. These guys are all billionaires and they can’t piss their players off. They can go to the owners and say, ‘hey let’s go into these communities and do some of these things,’ instead of wasting time about kneeling and who’s protesting.”

Suggestions of players doing community work on their own or with owners sound fine in theory, but that ignores how much is already being done on those fronts (perhaps partly because it doesn’t receive as much media attention as protests, but that’s the world), and the way Barkley throws it out here flies in the face of these protests. And telling players not to worry about the president calling them “sons of bitches” and saying they’re “wasting time about kneeling” is a very establishment-friendly, anti-protest take. Drew Magary had a nice takedown of Barkley’s Sunday comments at Deadspin:

Then I turned to CBS and they had their usual crew along with Charles Barkley. I know Barkley was already to scheduled to appear that morning, because CBS and Turner treat him as a multipurpose bloviator and will gladly bring him onto ANY show even if he’s done no preparation of any kind, and even if he’s still hungover from drinking Triple Sec straight from the bottle the night prior. But even with Phil Simms gracing the set, I can tell you that Chuck had the most lunkheaded reaction of the bunch.

…Back in 2000, it was near revolutionary for TNT to bring Chuck onto the set. …But that was a long time ago. Now Chuck IS the bullshit. Chuck is a doddering, lazy old man who thinks three-point shooters are pussies and doesn’t even bother to parse WHY players are kneeling during the anthem. (It’s worth reiterating here that all Colin Kaepernick wanted was for police officers to not shoot black people, which is a more-than-reasonable request, one that he shouldn’t even have to make.) Chuck can’t even be bothered to do his homework and see if players are already doing the background community work to supplement their public statements (guys like Marshawn Lynch are already way ahead of him on that). His job now is just to spout out decent copy regardless of coherence.

Indeed. Many of Barkley’s arguments don’t fit together coherently at all (he doesn’t want to tell people how to protest, but he does want to say they’re wasting time kneeling and talking about kneeling?). But they still add up to a hot take.

4. Phil Mushnick says America isn’t racist because a black president was elected, says players are “exploiting the national anthem,” blasts Marshawn Lynch’s “serial obscene behavior” and calls him “a recidivist stain on the game”, and says Charissa Thompson dressed like “a bare-shoulders, plunging-neckline cocktail waitress in a strip joint”: Mushnick managed to work his usual criticisms of touchdown celebrations into salvos against anthem protests this week:

Meanwhile, along NFL sidelines, players were exploiting the national anthem to let all know that America, which twice elected a black president, is racist.

Marshawn Lynch, another who demands respect in exchange for none, sits during the anthem.

Lynch three times has been sanctioned for vulgar acts during games, twice for grabbing his crotch after TDs. That he has been so indulged by the NFL that he has not been suspended for his serial obscene behavior doesn’t deter him from demonstrating that he has better things to do than stand for the national anthem.

He fired another volley against Lynch in a full column on celebrations:

CBS’ Ian Eagle and Dan Fouts found the fun in Marshawn Lynch’s fine for making obscene gestures during the Raiders’ opener. And, of course, no mention that Lynch is a recidivist stain on the game, having twice before been sanctioned for grabbing his genitals after scoring.

Never mind the incredible amounts of community work Lynch has done; apparently crotch-grabbing nullifies your right to protest and makes you a “recidivist stain on the game.” Not a surprising take from someone who thinks two elections where a black president won ended racism once and for all. And while it’s not related to Lynch or protests, Mushnick also printed weird thoughts about Charissa Thompson this week for some reason:

Mushnick’s old-man-yelling-at-cloud act got a little more problematic and a lot more sexist than normal this week.

3. Don Cherry says media praise anthem protesters, criticized Tim Tebow kneeling in prayer: Cherry, a CBC hockey commentator, often has ludicrous takes on that and other sports, and boy, did he deliver one this week:

Tim Tebow was ridiculed when he kneeled… https://t.co/guap5adAlg

The left wing media are true to form. When Tim Tebow the former quarterback of the Denver Broncos
went to his knees to thank the Lord, the lefties in the media said he was wrong and it was the wrong
thing to do. The late night leftie talk shows made fun of Tim, to the cartoonists in the paper he was a
joke and they made fun of him. It was brutal. Yet the NFL players go on their knees to make a point and
they are heroes. The reason they can make fun and ridicule Tim getting on his knees and thanking the
Lord is because he is a Christian. No other religion you can make fun of and ridicule… only Christianity. If
you are Christian you are open season.

First off, comparing Tebow’s kneeling (which was not during the anthem and not a protest) to protests about racial inequality is pretty insane (and amazingly, Cherry isn’t the only one who did that this week), but beyond that, does Cherry think that other religions aren’t ridiculed? There’s plenty of criticism of all religions, often by those in power. There’s a whole travel ban that seems to have a lot to do with one particular non-Christian religion. But yeah, it’s the Cherrys of this world who it’s really “open season” on.

2. Danny Kanell says Aaron Hernandez’s family’s CTE lawsuit is a “money grab”: Former ESPN personality and current CBS analyst Kanell has been known for hot takes on concussions and CTE before, and he unleashed another one Friday in the wake of the news that Aaron Hernandez had CTE and his family was suing the NFL (he would not be eligible for benefits under the current concussion settlement, as he played too recently):

Aaron Hernandez family not missing out on money grab ??Of course they'll sue the NFL and Pats. OJ probably next- Football made them do it!! https://t.co/sjnDl0aoQ8

There’s no direct proof that CTE caused Hernandez to commit murder (or do anything else), and claiming that concussions were the sole cause of his actions is flawed in its own right, but calling this lawsuit a “money grab” is problematic. Kanell is fortunate that his own football career hasn’t apparently created any long-term health problems for him so far, but his continual downplaying of those who did suffer severe brain damage from football is a bad take.

If you don't like Jerry Jones, you don't love America. pic.twitter.com/xFkwLBP9HB

There are plenty of people who don’t like Jerry Jones for a multitude of reasons, and even Jones’ decision here took significant criticism as a “PR ploy” (to say nothing of the people who hated it for giving anthem protests recognition). Regardless of your opinion on Jones’ actions here, they certainly weren’t uncontroversial, and saying that those who dislike Jones “don’t love America” is a ridiculous take. That tweet could have used some more MLB editing.