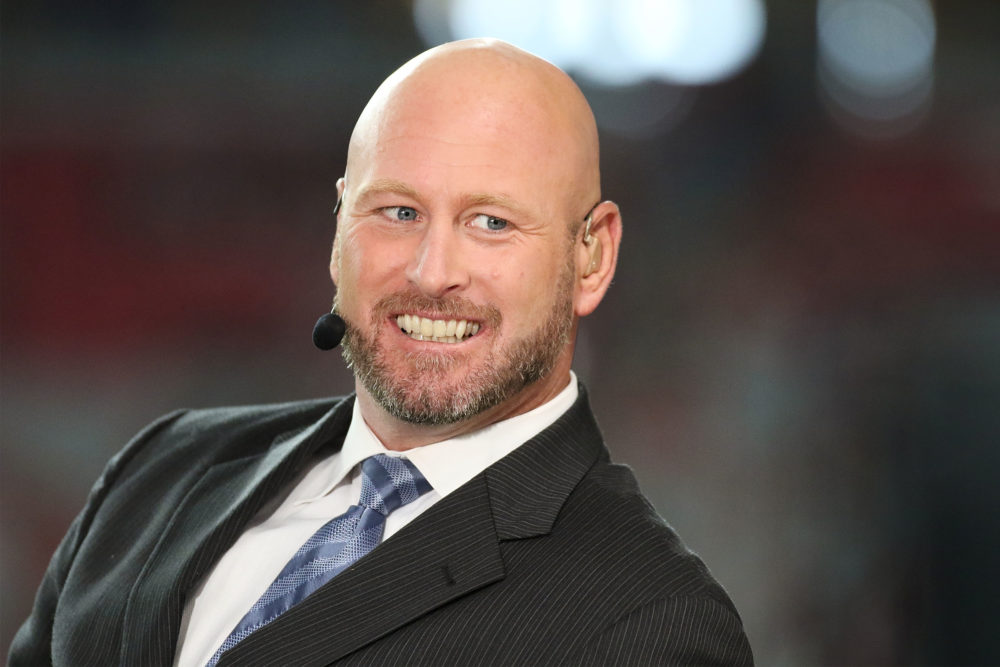 Since he was caught up in the ESPN layoffs last April, Trent Dilfer has continued his work as the head coach for the Elite 11 quarterback competition and has done some speaking, Super Bowl kid reporter hosting, and more, but hasn’t been seen too much on TV. That’s about to change, and in a pretty unexpected way.

NFL Communications announced Tuesday that Dilfer and Sport Science creator and host John Brenkus have teamed up for a new Soul and Science property that will span multiple sports, and that part of it will be segments on top quarterbacks that will be featured on NFL Network and the NFL’s digital platforms around the upcoming draft:

Soul and Science will feature Dilfer and Brenkus as they provide in-depth analysis of athletes in every sport, with Dilfer exploring the intangible factors (Soul) that make an athlete special, and Brenkus diving deep into the biomechanics (Science) of elite athletic performance.

…NFL Network is planning to debut each Soul and Science segment on their flagship shows Good Morning Football and Total Access as well as across all digital platforms on April 18.

Vice President/Executive Producer of NFL Studio and Remote Production, Mike Muriano, said, “Soul and Science is a dream partnership between Dilfer and Brenkus that will examine the position of quarterback unlike anything before. We look forward to delivering our audience this incredibly unique content.”

Regarding the trailblazing partnership, Brenkus said, “Trent’s expertise in analyzing the position of quarterback is unrivaled in the industry. He truly understands the tangibles and intangibles that make a quarterback successful at the highest level.”

“The scientific work that John has done in the past has truly changed the way we look at sports,” adds Dilfer. “And John and I both agree that science is only one lens through which we should examine a player.”

The NFL segments will feature the likes of Josh Allen, Josh Rosen, Sam Darnold, Baker Mayfield, Lamar Jackson, and Luke Falk. And this might be interesting; there’s certainly a lot of focus on quarterbacks ahead of the draft, and it makes sense for the NFL and NFL Network to have their own signature series (something ESPN’s done previously with Gruden’s QB Camp and now with the Russell Wilson-hosted QB2QB) breaking down the top QB prospects. And Brenkus’ side of this might be particularly notable, as Sport Science has found a lot of success over the years and inspired plenty of wider discussion on biomechanics. That could be especially worth watching with these quarterbacks, as there’s already a lot of popular debate out there about the various throwers’ motions, arm strength and more.

What may really determine if this succeeds or fails are Dilfer’s contributions, though. “Exploring the intangible factors that make an athlete special” could be worthwhile, but it also could have a lot of potential to go wrong. There’s a reason intangible-based analysis is often criticized, as it’s by definition unmeasurable, and the subjective nature of that kind of commentary means it’s often influenced by the commentators’ own biases. (And Dilfer has come under some fire for that before.)

Maybe Dilfer will be able to use his own past as an athlete and an analyst to relay some interesting thoughts, or maybe this will lead to him making questionable assumptions about prospects and what they’re thinking. And it may be really notable to see how this plays out in other sports where Dilfer doesn’t have firsthand playing experience; the release mentions that “Soul and Science will launch additional content with soon to be announced deals across the world of sports and beyond.” We’ll see how this goes, and how far Soul and Science gets.