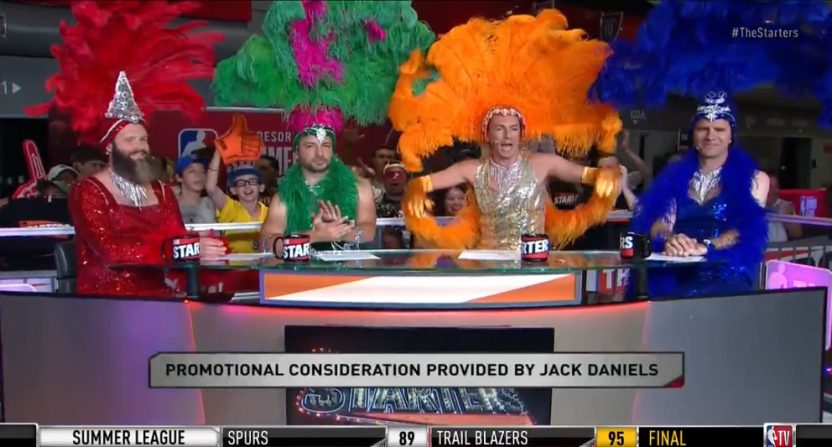 NBA TV’s The Starters did five nightly specials from the NBA’s Summer League in Vegas this year, with the final one Tuesday, and they made it a finale to remember. The group (J.E. Skeets, Tas Melas, Leigh Ellis and Trey Kerby) called a San Antonio Spurs – Portland Trail Blazers game earlier in the day Tuesday, and before that game, Skeets made a bold bet:

If we don't get a #wedgie during today's @spurs / @trailblazers game on @NBATV, we'll dress as Vegas showgirls on tonight's final ep. of #TheStarters at @NBASummerLeague.

“A wedgie” is Starters parlance for a ball that gets stuck on the rim, something that’s been known to happen every once in a while. But it didn’t happen in this game. And that led to The Starters coming through on that bet, in spectacular fashion; they not only dressed as showgirls, but kept those costumes for their whole half-hour show Tuesday night. Here’s the start of it:

Here’s Skeets’ subsequent explanation of why they’re in these costumes:

Here they are much later in the show, discussing a perfectly normal NBA topic (the Rockets’ offseason) while still in the costumes:

And here’s their signoff, complete with Tas saying “This stays in Vegas.”

That’s pretty great, and is also some commendable follow-through.