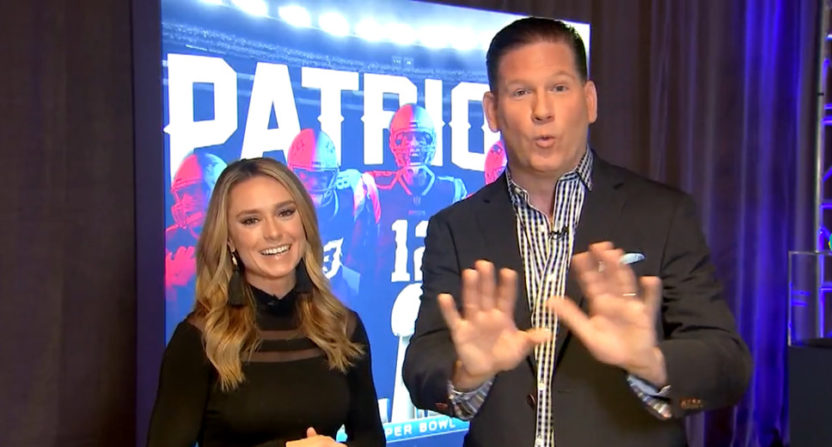 Most professional sports teams have pretty extensive video content on their websites these days, but the New England Patriots are taking it to a whole new level ahead of Sunday’s Super Bowl. They’ve launched the “Not Done Network,” a hosted video stream that went online Monday at 9 a.m. Eastern with coverage of the team’s send-off rally at Gillette Stadium and will conclude with a live production of the team’s Patriots All-Access show Saturday night at 7 p.m. Eastern.

The network will include a studio in Minneapolis’ Mall of America, billed as “a destination for Patriots fans in town for the game, but more importantly, the central nerve center for the Not Done Network’s content production,” and will be primarily hosted by Jay Crawford (the long-time ESPN sportscaster who was laid off last April and joined Bowling Green University in September  as an executive in residence) and Molly McGrath (the former Fox Sports and current ESPN reporter, seen at left above talking to Fox 25 News Boston’s Tom Leyden about the network).

Here’s more on the network from the team’s release:

“We have some of the most passionate sports fans in the world with an insatiable desire for more information in the week leading up to the Super Bowl,” said Patriots Chief Marketing Officer Jen Ferron. “With the Not Done Network, we are going to be able to provide a constant stream of Patriots content that fans around the world can watch in anticipation for Super Bowl LII. In addition, for the thousands of fans ascending on the Twin Cities next week, the Not Done Network site will provide a destination where fans can gather on location. This will be a huge undertaking, but we are excited to share the week of the Super Bowl with our fans in such a unique way.”

The anytime, anywhere access provided by the Not Done Network takes Super Bowl coverage to the next level for Patriots fans, and the live broadcast allows instant reaction to any breaking news during the week.

In Minneapolis Sunday, McGrath joined Leyden in the new Not Done Network studio space (12,000 square feet) to discuss the plans for the week:

“This is very interactive. This set is going to have games, there’s cornhole, there’s billiards tables, there’s shuffleboard. And this is something where we want Patriots’ fans to be able to come to Mall of America, spend some time here, watch us live on set, this is going to be a 24-hour network, so 12-hour shifts. We’re here all day long, and fans can come watch us live, it’s interactive, and be a part of it. And the big reason why they wanted to do the Not Done Network was as a gift to the fans. This is the Patriots’ gift to the fans. The Kraft family was incredible, this was an idea by the Kraft Sports Productions Group, and they thought of this and Robert Kraft signed off on it. And it’s not very often that you see an owner willing to take a big risk like this and do something that’s so outside of the box, something that’s never been done by a team.”

This is certainly an interesting concept, and if there ever was a team to do it and a time to do it, the Patriots during Super Bowl week seems perfect. That week produces so much content on the players and teams involved that there’s always something to discuss, which wouldn’t be the case all year for a network focused just on one team. And Patriots’ fans might well be interested in tuning in for team-supplied coverage rather than just flipping on ESPN, given how many of them are upset at that network. (The hires of ESPN-associated personalities like McGrath and Crawford are interesting there, but neither’s particularly associated with the complaints Patriots fans have made about the network.) It also makes sense to do this in Minneapolis and to set it up as a place where Patriots fans in town are welcome to come congregate and provide a lively atmosphere. And while there might be some wondering if McGrath should be working for a team while she’s with ESPN, that’s not that uncommon; many ESPN announcers call games for teams and/or regional networks as well, and this is only for a week.

In any case, this is an experiment worth following. The schedule for Monday has a bunch of radio (Patriots Football Weekly, The Hardy & Morry Show), plus McGrath and Crawford covering the team’s arrival and the Super Bowl Opening Night festivities. We’ll see how much attention it gets, and if it proves worth the Patriots’ investment. But they’re certainly providing non-stop streaming content for their fans, and that’s an interesting step. If that goes well, we might see this replicated by other teams. That won’t necessarily be on this scale, complete with on-location studio, veteran sportscaster hosts, and 24/7 coverage, but the idea of live streaming coverage of a team on their own website and channels in the lead-up to a big game certainly would seem to have some appeal. At the very least, it’s a notable idea.