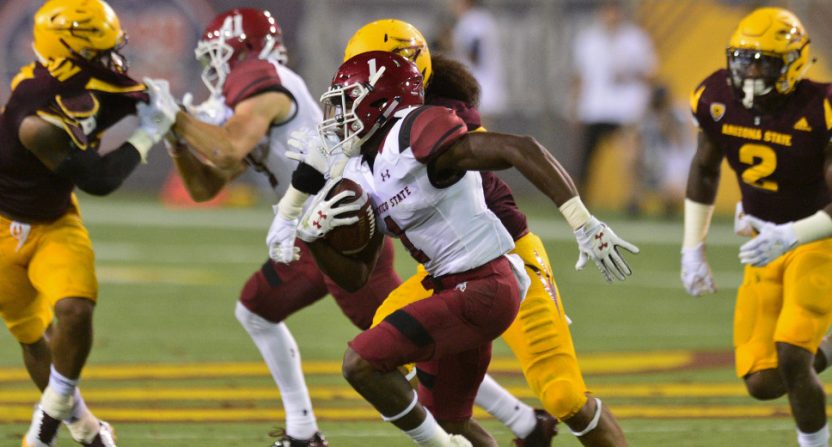 We do an awful lot of dunking on the struggles of the Pac-12 Networks, but they do really make it easy sometimes. Such as with their new, bold strategy, six years after launch, of realizing that the college sports content most viewers are most interested in is…football. That would be no surprise to anyone who had ever looked at ratings or rights deals, but until now, the networks have been wide-ranging with what sports they emphasize, putting a lot of priority on Olympic sports, and commissioner Larry Scott even said at this year’s Pac-12 football media day that “The scorecard we think matters, and that I know our university presidents and athletic directors care about most, is academic and athletic success across all sports.”

However, Jon Wilner of The San Jose Mercury-News writes that there are some changes in the works under new networks president Mark Shukin (who took that job last August, too late to dramatically change things ahead of the 2017 season), which will lead to a bigger spotlight for football.

In 2018, however, we’ll see the beginnings of a revamped approach fueled by the campuses themselves and implemented by a new management team.

“The universities and the athletic directors have told us they want to emphasize football,” networks president Mark Shuken told the Hotline.

“We want to give the people what they want, when they want it, and interest is clearly driven by football. We just had to plan how to do it.”

On one hand, it’s hilarious that it took the schools and the conference six years to figure that out, but it’s positive that they have finally figured that out. And there are some tangible improvements ahead. While the networks can’t exactly just show bigger football games thanks to their top-tier rights deals with ESPN and Fox (so they’re stuck with games like last year’s New Mexico State – Arizona State clash, seen above), they can improve and prioritize their football shoulder programming, and Wilner’s piece dives into a lot of that. This spring saw the networks broadcast every end-of-spring scrimmage on the national feed for the first time (previously, some had only aired on specific regional networks), and this fall will see them produce an on-site pre-game show for the first time, with that show making one appearance at each Pac-12 school over the course of the season.

That in particular seems to be a significant step up. Of course, there are plenty of challenges for the Pac-12 in doing so; there are at least three other on-site pregame shows each week (ESPN’s College GameDay, SEC Network’s SEC Nation and Big Ten Network’s BTN Tailgate), and sometimes others, like the special on-location one Fox did for Ohio State – Michigan last year. And unlike most of those other ones, a Pac-12 pregame show is competing with live games thanks to time zones. And doing an on-location show isn’t cheap, so we’ll see if this actually proves to be worth it for the networks. But an on-location pregame show does suggest that they’re putting substantial new resources into their football broadcasts. (It’s also notable that they did this for their men’s basketball tournament for the first time this spring as well, another sign that there’s an increased focus on the sports with the most viewership.)

And the changes to emphasize football programming go beyond the pregame show. The Inside Pac-12 Football show is moving from Fridays to a more favorable slot on Tuesday nights, while a new The Playlist item will feature coverage of news throughout the day, and The Drive will feature five compilation episodes airing throughout the season on the networks. Previous shows like 12 Greatest, Final Score and Football in 60 are back too. None of that’s necessarily huge, and there’s only so much the network can do to emphasize football given the slate of games they’re left with after the games promised to ESPN and Fox, but it is interesting that they’re now regarding football as a priority. Of course, that doesn’t mean that they’re moving away from covering other sports altogether, and they shouldn’t (there are a whole lot of hours to fill, especially with their setup of both regional networks and a national feed), but putting an emphasis on football makes sense given the size of the audience that’s interested in it.

And that really is important for a network that’s facing diminished rights fees and carriage battles; they need to not just produce content, but have people actually watch that content. Of course, the largest part of that is big live games, and they can’t do much to change that right now. But they can change what they produce and focus on in shoulder programming, and while their football shoulder programming may still not draw huge numbers overall, emphasizing it is likely to draw more numbers than the previous wider focus on sports watched by less people. We’ll see what this shift actually leads to and if it works out for the networks, but hey, at least they’ve finally figured out that the college sports content the largest audience wants to watch is around football. It only took them six years.