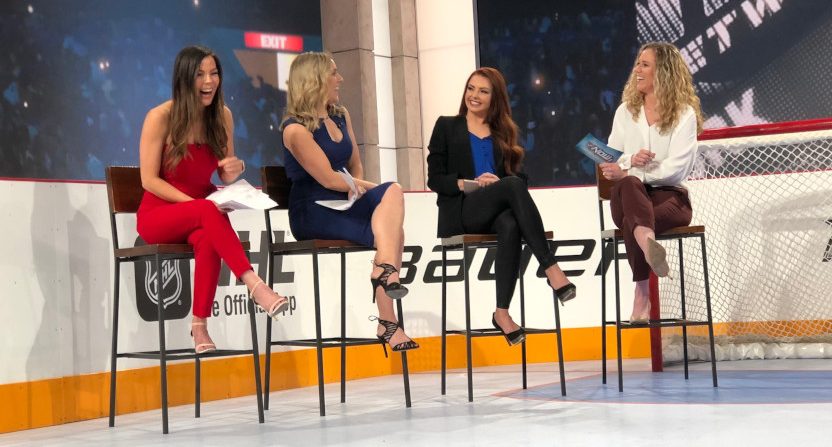 The last four years have seen NHL Network air an all–women edition of their afternoon show “NHL Now” each March around Gender Equality Month (last year’s edition is pictured above). This year, they’re moving that all-women broadcast to their flagship evening NHL Tonight show, with that edition airing this Tuesday beginning at 6 p.m. ET.  The network’s Jamie Hersch (who spoke to AA on these efforts in 2018 and 2019) and Jackie Redmond will serve as hosts, with Kendall Coyne Schofield as analyst; Jennifer Botterill is also slated to join them remotely for the first hour. Here’s more from a release:

NHL Network today announced that for the first time ever it will air an all-women edition of NHL Tonight™ – the network’s flagship studio show – this Tuesday, March 22 at 6:00 p.m. ET. Co-hosted by NHL Network’s Jamie Hersch and Jackie Redmond, with 2018 Olympic gold medalist Kendall Coyne Schofield as analyst, the program will feature live look-ins to the night’s games in action, analysis, demonstrations, and highlights.

“NHL Tonight is an unscripted, free-flowing show in which we’re constantly bouncing around to different live games and reacting to the amazing action in front of us,” said Hersch “I’m excited to showcase our passion for and knowledge of the game in this style of a show. We’ll be hanging out, watching hockey together on NHL Tonight, just like always, but it just so happens that you’ll hear three female voices reacting to and analyzing the action.”

“I grew up with people constantly referring to me as ‘one of the boys’ and it was intended as a compliment, but I’m not one of the boys,” said Redmond. “I’m one of the girls and we like hockey too! So, I can’t wait to sit back, watch games, and talk hockey with two women I admire and show all the little girls at home that they don’t have to be one of the boys to love the game.”

Tuesday’s program builds on NHL Network’s longstanding goal to raise awareness for women in hockey, which has recently included the IIHF Women’s World Championship, the “My Why Tour”, and NHL Now’s new “Jack and Paq” segments with Renee Paqette. Cammi Granato on becoming Assistant General Manager for the Vancouver Canucks, Jocelyne Lamoureux-Davidson on participating in the NHL All-Star Skills competition in Las Vegas, and Daniella Bruce on being the first woman to broadcast for the Detroit Red Wings are a few of the additional segments that have aired on NHL Network this season supporting the National Hockey League’s Hockey is for Everyone™ initiative.

The all-women NHL Now broadcasts seem to have worked out pretty well for NHL Network, and there are many women in significant roles in hockey broadcasting these days. Leah Hextall joined ESPN as the first woman with a regular national play-by-play NHL role this season, and NBCSN and Sportsnet both featured all-women game broadcasts in 2021. The New Jersey Devils also featured their team’s first all-women broadcast earlier this month, with Kelly Schultz and Erica Ayala calling their digital broadcast for their game against the Colorado Avalanche.

And women’s hockey continues to be popular in general, and this month (which the NHL has celebrated) also saw reports of the NHL trying to get the two primary North American professional women’s hockey groups, the Premier Hockey Federation (PHF) and Professional Women’s Hockey Players Association (PWHPA), together. We’ll see what comes of all of that. But hockey is definitely a sport with a lot of prominent women as fans, players, and media members, and it’s cool to see NHL Network again recognizing that and spotlighting some of their top women in an all-women show.