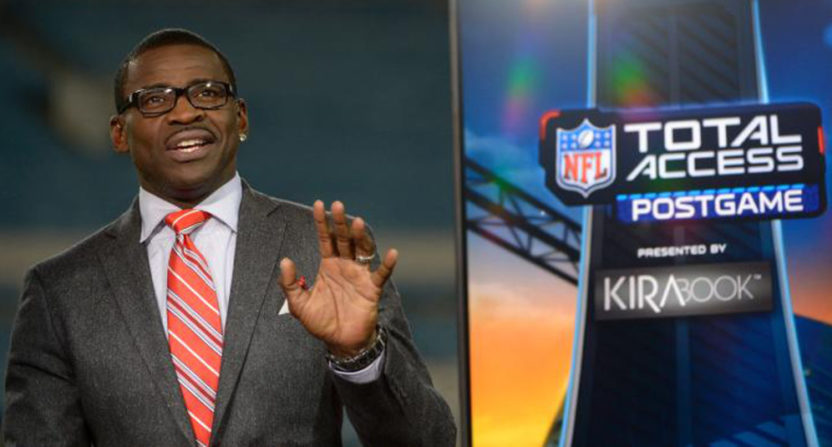 The latest NFL investigation involves a media personality rather than a player. That would be NFL Network analyst Michael Irvin, who was investigated by Fort Lauderdale police in March after a 27-year-old woman accused him of sexual battery. The police investigated until May, then handed the case over to the Broward County State Attorney’s office for review, and that office decided in July not to press charges.

However, the league can investigate and punish players and employees under their personal conduct policy regardless of what the judicial outcome is, as in the Ezekiel Elliott case, and NFL spokesman Brian McCarthy confirmed to Deadspin’s Dom Cosentino Tuesday that they’re investigating Irvin under that policy:

League spokesman Brian McCarthy confirmed that Irvin is being investigated.

“Yes, the investigation is ongoing under the personal conduct policy,” McCarthy told me via email.

…Here again is the personal conduct policy, which was expanded in 2014 in the wake of the Ray Rice fiasco to read:

“In cases where a player is not charged with a crime, or is charged but not convicted, he may still be found to have violated the Policy if the credible evidence establishes that he engaged in conduct prohibited by this Personal Conduct Policy.

A disciplinary officer, a member of the league office staff who will be a highly-qualified individual with a criminal justice background, will follow the process outlined below to investigate a potential violation, produce a report and if desired present a disciplinary recommendation for the Commissioner’s consideration.”

The Irvin case involves the woman in question accusing him of drugging and raping her. Here’s the state attorney’s memo on the case, first posted by Florida radio host (Miramee’s WINZ) Andy Slater here:

In that memo, the woman says she had known Irvin for six or seven years and had previously dated one of his friends, but had never had a sexual relationship with him. She says she was staying at a Fort Lauderdale hotel in March when he texted and asked to meet; they had drinks together at two different bars, then she went to his hotel with him, felt sick, thought she had been drugged, fell asleep, and woke up to what she described as him sexually assaulting her. Cocaine, MDMA, MDA, Adderall and alcohol were found in her system.

The assistant state attorney and assistant state attorney in charge recommended declining the case, though, saying “there is not enough evidence to establish that a crime was committed” and “there is no reasonable likelihood of conviction.” Factors they cite include that they couldn’t prove that Irvin gave her the drugs, they couldn’t prove she was a victim of sexual battery, and that there was surveillance footage of the woman dancing and talking to employees before going to Irvin’s room and leaving with him in the morning without initially appearing upset.

As Pro Football Talk’s Michael David Smith noted in March, this is far from the first accusation along these lines against Irvin, but none have led to criminal charges.

This is at least the third time Irvin has been named in a sexual assault case, but he has never been criminally charged. In 1997 he was falsely accused by a woman named Nina Shahravan, who admitted she lied and was sentenced to 90 days in jail for misdemeanor perjury in connection with the incident. In 2007 he was accused of sexually assaulting a woman in a hotel room. Prosecutors did not press charges, she sued him in civil court, he countersued for defamation, and those lawsuits resulted in a confidential settlement.

However, the NFL has made it quite clear that players can still be found to have violated the personal conduct policy when they’re not charged, or charged but not convicted. And it appears that standard can apply to league employees as well. It’s notable that other NFL Network employees have been fired (including Darren Sharper, after numerous rape charges in 2014, and Warren Sapp, for getting caught in a prostitution sting at the Super Bowl in 2015) for their actions away from the workplace before.

We’ll see how long this investigation takes (the Elliott one notably took 13 months), and if it leads to punishment for Irvin.