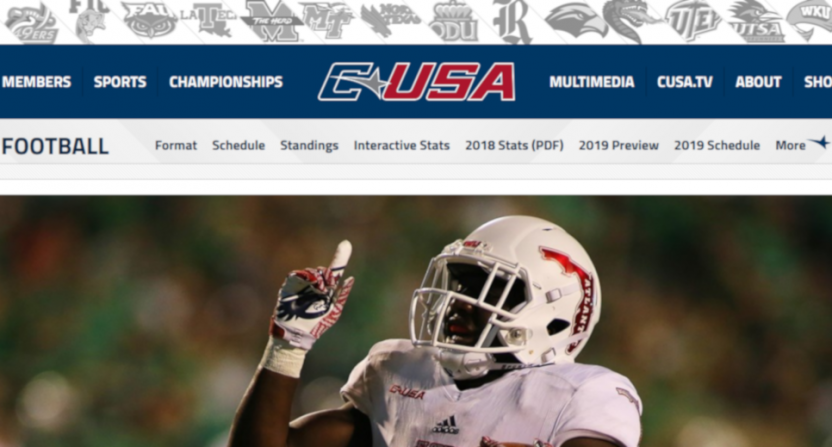 For what appears to be the first time in over a decade, the NFL Network will again be showing regular-season college football. Conference USA and the NFL announced Monday that the conference has signed a four-year deal with NFLN, beginning with a Saturday afternoon game each week of the season this fall. That adds to their existing deals with CBS, Stadium and ESPN, all of which were signed last year. Here’s more from the release:

Conference USA Commissioner Judy MacLeod and the NFL announced today a new four-year contract for a 10-game package of C-USA football games to be broadcast on NFL Network. The partnership will begin in the 2019 football season with one game each week on Saturday afternoon.

“While exploring new media options for football, NFL Network stood out as an excellent opportunity for national exposure,” said MacLeod. “We look forward to showcasing our conference through their tremendous platform and reach.”

“We are excited to showcase the next generation of NFL athletes to our fans on a weekly basis,” said Hans Schroeder, Chief Operating Officer of NFL Media. “Our fans crave live football, and partnering with Conference USA – a conference which boasts several Hall of Fame players – provides us with an excellent opportunity to do so.”

While NFLN is obviously focused on the NFL, they have shown some other leagues and games in the past. When it comes to college football, they regularly show the  Senior Bowl and have shown the East-West Shrine Game. From 2006 to 2008, they also aired some Division I FBS bowl games and some regular-season games between historically-black colleges and universities. And they’ve broadcast some games from other leagues here and there, from the CFL to the Arena Football League to the Alliance of American Football (RIP). But they haven’t had a lot of college programming in a long while, or much non-NFL programming at all (outside the AAF) in recent years, so it’s interesting to see them emerge with this deal.

The terms of the deal haven’t been announced, so it’s not clear if NFLN is paying C-USA a rights fee or if the conference is buying time and/or paying production costs. But, as mentioned above, this looks to be in addition to the deals the league signed last year, which include nine football games and the C-USA championship yearly on CBSSN, three CBS-produced football games a year for Facebook, 15 games annually on Stadium (seven of which will be Facebook-only), and a lot of games on ESPN+ and ESPN3 (32 and 13 last year respectively). So C-USA once again has four media partners; before last year’s deals, they had deals with American Sports Network (now Stadium), beIN Sports, CBS Sports Network, and ESPN.

For C-USA, this is a bit more national television exposure. For NFLN, it’s some live game programming on Saturdays. So there’s some logic here for both sides. But it’s worth keeping in mind that this comes amidst a reported $20 million budget reduction at NFLN after they were dropped by AT&T U-Verse, DirecTV and DirecTV Now. So, if they are paying a rights fee, it’s likely not a very high one. (Of course, adding some further live games could perhaps boost their carriage case, but it’s unclear that 10 C-USA games a year would really affect that, especially with that conference already having so many other media deals.) And this isn’t the conference’s primary media deal, so it’s more of a move at the margins for both sides. But it’s certainly notable to see NFLN back in the college football game, even on a limited scale.