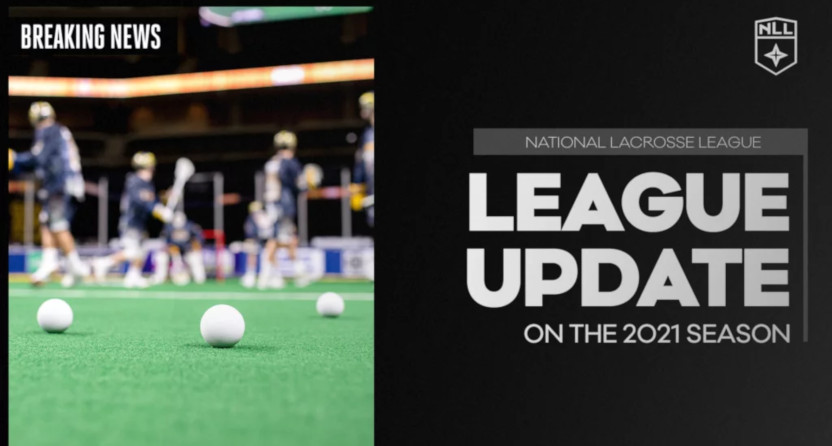 The latest COVID-19 postponement is a league that wasn’t even set to resume play for a few more months. That would be box lacrosse’s National Lacrosse League, which called off its 2019-20 season last March and was looking at resuming play this April, but announced Wednesday that they’ll instead be shifting their focus to having a full 2021-22 season beginning this fall. Here’s more from that announcement:

The National Lacrosse League (@NLL), the largest and most successful professional lacrosse property in the world, today announced that plans for an abbreviated season this spring have been cancelled due to uncertainties arising from the ongoing Pandemic. The league, with the full support of the NLL Board of Governors, will now move to start a traditional season in the fall of this year.

“We have gone through many scenarios, including playing a bubble season in Canada in April, but the logistical challenges, including the recently announced tighter travel and quarantine restrictions across the Canadian border have required us to pivot. We have decided to focus on playing a full season in our markets, starting in the fall of this year,” said NLL Commissioner Nick Sakiewicz. “While many of the factors we can control were moving along well, those outside of our control, especially pertaining to obtaining government approval as far in advance as we would have needed, are no longer feasible. All the efforts and innovations we were planning will now go towards a full season starting this fall and into next year. We thank our players, teams and Board of Governors, whose thoughts in this process were invaluable, and we now set our sights on getting lined up for a full NLL season starting in the fall. We also thank our fans for sticking with us – we will be back, and it will be even more exciting than ever before.”

“We appreciate the League’s extensive efforts to provide us the opportunity to play an abbreviated 2021 season in a safe and controlled environment throughout the changing landscape during this Pandemic. While we are disappointed that it will not be possible to play this spring, we are even more excited and passionate about having a full 2021-22 season and are eager to get back on the floor this fall,” said Zach Currier, PLPA President.

The NLL does face some particular challenges given its eight teams in the U.S. (which is planned to rise to nine in the fall with the expansion Panther City Lacrosse Club in Fort Worth, Texas) and five in Canada. Leagues with one Canadian team have seen those teams (the Toronto Blue Jays and Toronto Raptors of MLS and MLB) relocate to the U.S. temporarily, while the NHL has had to develop a separate all-Canadian division for its current season. That’s not an easy or cheap situation to deal with, and it’s understandable why the April plans were thrown off by recent Canadian border regulation tightening. (They’re also not the only league to go away from initial plans to resume; the Canadian Football League was one notable one that did the same last fall, and some others have followed suit.) But it will be interesting to see what they come up with for this fall, as there are plenty of questions still about what infection and vaccination rates and cross-border travel will look like then.

As for broadcasting, the NLL’s 2018-19 and 2019-20 seasons aired on Turner Sports’ B/R Live in the U.S., and that service has its own uncertainty about its future. It’s unclear if the league’s season this fall will air there again or if it will wind up elsewhere.