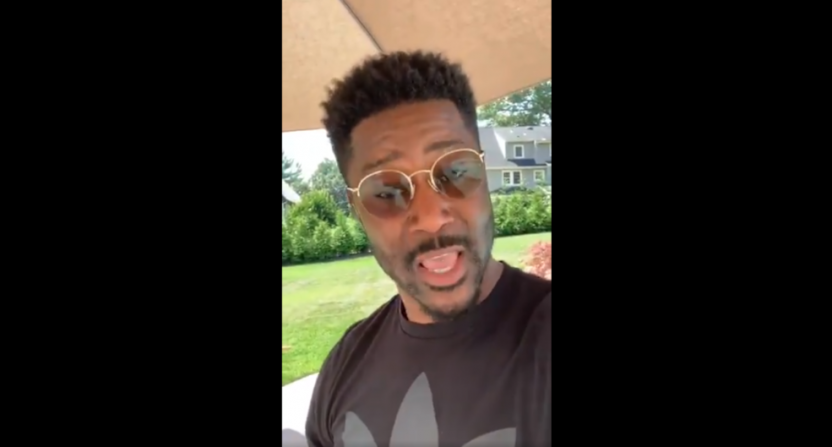 Los Angeles Lakers’ star LeBron James had some fun at his son’s AAU game this weekend, throwing down some dunks in a layup line, and that apparently set off a bunch of idiots at Fox Sports 1. And while the likes of prominent personalities like Skip Bayless have chimed in on this in expectedly-stupid fashion, the take that’s really making headlines is from Jason Whitlock, the co-host of the never-watched afternoon show Speak For Yourself. That drew a ton of backlash, most notably from CBS/NFL Network analyst Nate Burleson. But first, here’s how Whitlock compared James’ layup-line dunks to cocaine usage Monday:

Having fun at your son’s AAU game is now the equivalent of being addicted to cocaine, according to Jason Whitlock. pic.twitter.com/xUQrxKEjeV

As expected, that take produced a lot of blowback, and was criticized by everyone from James’ Lakers’ teammates like Kyle Kuzma to Whitlock’s Fox comrades like Nick Wright:

It be your own ppl.. https://t.co/tDB6LxWPJc

The criticism for how LeBron interacts with his son’s basketball team during AAU season has been some of the craziest commentary I’ve ever witnessed. We discussed it on the show today. https://t.co/Pg5eSwor6A

But some of the most interesting commentary on this comes from another media figure, Burleson. Here’s what Burleson had to say on the matter Tuesday:

I’m not in the business of calling out other black men doing what they do but since @WhitlockJason is so comfortable doing it…here’s to you.

“Alright, I’m going to address this, and then I’m going to go back to enjoying this beautiful Tuesday. I responded to a tweet earlier, and it was Jason Whitlock on Speak For Yourself, and he had a take on LeBron James. Surprise, surprise. He said that LeBron James was doing too much at his son’s basketball game, Bronny’s basketball game. He was overly involved, he was too hype; they showed him dunking in the layup line and getting hype when his kid made a play.”

“Why is that a bad thing? Is he using bad words? Is he showing bad energy? Is he teaching kids bad habits? Is he talking bad to opposing teams’ players? Because I’m in those gyms and I see parents who ain’t never played basketball doing all those things. LeBron ain’t doing any of that, he’s a shining example. So you’re telling me that LeBron James, who he plays in the NBA, when he scores, people go crazy, popcorn flying, they stand up cheering, yelling, going nuts. He can’t do that for his own kid, his own seed, his own blood? What?”

“I got three kids. Nathaniel’s 15, Nehemiah’s 13, my daughter is 9. If I’m at her tennis match, if I’m at a basketball game, football game, track meet, I’m going to get up and show out for my kids, because I want them to look in the stands and see me. ‘My daddy is here and he’s present.’ And I want them to feel that energy. As long as I’m not being disrespectful to the person next to me, or to the opposing team, I’m good. And don’t say it’s disrespectful because his son is good and LeBron is screaming. No, that’s called love and pride.”

“I didn’t even mention the fact that there’s so many young African-American boys and girls that look up in the stands and see nobody. A black man showing up at the gym, showing his kid love and putting on a show for the fans that are there? That’s a great thing. Pssssh. Y’all sound crazy.”

It’s of course notable that Whitlock says something utterly deranged almost every day, which is why we’ve stopped covering him regularly here. But Faux Fox
Sports 1 continues to deem him worthy of employment, and although no one watches his show, that does mean that occasional takes like this that transcend even his normal bounds of idiocy do tend to get some attention. And FS1 still finds insane takes like this worthy of national airtime.

It’s interesting to see the likes of Burleson calling Whitlock out, though, as that’s a stronger reaction than we normally see to his dumb comments. And perhaps this will help reinforce how Whitlock is in the modern lunatic fringe of sports media, and how nothing he says should be taken seriously. But Fox seems determined to promote him regardless, and to continue giving him a platform to spew idiocy like this. But it’s notable to see other prominent media figures like Burleson deciding to take him on.