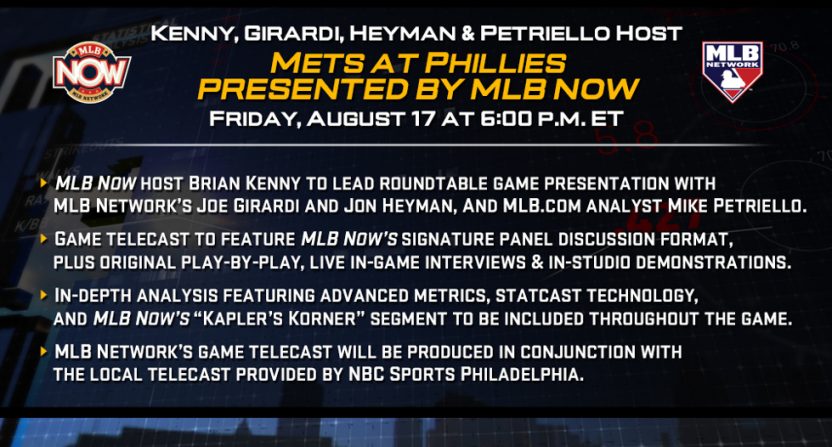 For the fourth consecutive year, MLB Network is doing an unconventional game broadcast focused on advanced statistics. Last year saw them do this for an August Cubs-Giants game, jumping between the traditional broadcast on NBC Sports Bay Area and “an advanced-stats heavy roundtable discussion” with MLBN’s Brian Kenny, former player Mark DeRosa, New York Post reporter Joel Sherman, and MLB.com Statcast guru Mike Petriello. This year’s version, “Mets at Phillies Presented by MLB Now,” takes place Friday (beginning at 6 p.m. Eastern), and it will be a little different both in production and in cast.

While more MLB broadcasts incorporate advanced stats, this approach is meant to move away from traditional play-by-play to a different pace that features in-depth context of analytics, plus essays, interviews and in-studio demos.

This Friday will mark the fourth installment of this style of game call on MLB Network after debuting in 2015.

Here’s more on this from  R.J. Anderson of CBS Sports:

“The idea is to try to bring a different perspective on stats to the mainstream audience,” said Petriello, who noted that the conversations between the panel members will at times stray from the beaten path toward topics like whether the shift should be banned and how metrics should be implemented. There will also be a different brand of analysis offered. Whereas television analysis is often reactive in nature — here’s why the manager did this — this broadcast ventures into the proactive — here’s what the manager ought to do.

…Predictably, based on the actors involved, the broadcast will borrow elements from “MLB Now,” complete with Kenny delivering an in-between innings essay. The Mets and Phillies tilt doesn’t feature the stakes that other games will on Friday night — the Colorado Rockies-Atlanta Braves and Milwaukee Brewers-Cardinals contests have bigger playoff implications — but the presence of Phillies manager Gabe Kapler plays well into the broadcast’s design. Kapler is a known proponent of sabermetrics and eschewing tradition — to the extent that “MLB Now” created a segment called “Kapler’s Korner” wherein Kenny tries multiple times per week to explain the thinking behind the manager’s most zany and/or esoteric strategies.

It makes sense for MLB Network to experiment with some unconventional broadcasts, and this approach seems like a good way to handle it. It’s easy enough to follow what’s happening even without a fully traditional play-by-play, and focusing fully on the discussion should make this more valuable for those interested in analytics, presumably the target audience here. That approach has worked well for things like ESPN’s “Coaches’ Film Room” options during their College Football Playoff Megacasts, and it seems logical to do it here as well. This will still be in conjunction with the NBC Sports Philadelphia telecast, but that will presumably be more about video feeds than commentary from that broadcast. And having the Phillies involved makes it natural to throw in some of those “Kapler’s Korner” segments.

It’s also notable that this will mark the fourth straight year MLB Network is doing this. Many unconventional broadcasting ideas are tried once and then quickly forgotten about, but this one seems to have some staying power. Each of these broadcasts have been a little different and have featured some different guests (and it will be interesting to see how Heyman and Girardi do on a stats-focused broadcast), but the overall concept is clearly providing some value for MLBN, leading them to keep it up. We’ll see how this one goes.