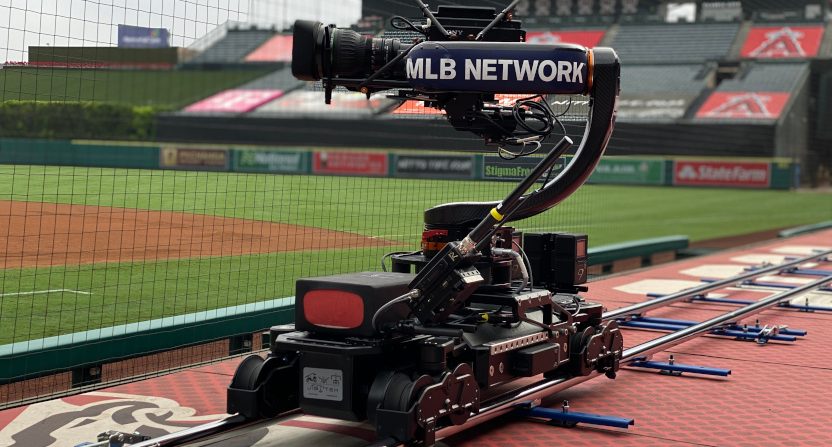 Sunday’s MLB Network Showcase broadcast of the Seattle Mariners-Los Angeles Angels game came with an interesting new camera setup; the “Speed Cam.” It’s a gyroscopic-stabilized camera that runs on a track on top of the first base dugout, moving faster than any runner heading to first and providing a field-angle view of plays there. The camera was first used on a game broadcast on MLB Network’s coverage of the Vanderbilt-Michigan game at the MLB4 Collegiate Tournament in February in Arizona, but Sunday marked the first time it was used on a MLB game. And it got some notable shots, including this look at the Angels’ David Fletcher getting hurt lunging for first base:

Here’s a look at how it showed a juggle at second base, the eventual throw to first, and how there was still plenty of time to get the out:

The camera also provided some neat angles of plays across the field, such as this diving grab and throw to first from the Angels’ Anthony Rendon:

That clip also comes with play-by-play voice Scott Braun and analyst Buck Showalter (who were calling the game from MLB Network’s studios in Secaucus, New Jersey) talking about how much they like the new camera. Here’s a transcription of that:

Braun: “At this point, for replays, I’m waiting for it in anticipation.”

Showalter: “Yeah! The look we got at Fletcher stepping on first base. So many things. My mind’s spinning with things you could use it managing.”

It’s interesting to hear the broadcasters liking the information they’re getting from this new camera setup this much, and perhaps especially so with them broadcasting remotely and reliant on cameras and monitors rather than what they can see from their own eyes. And in its MLB debut, Speed Cam certainly provided some notably-different angles, and it showed off some of the potential of this setup. Here’s a quote about what MLB Network hoped to accomplish with this from a release:

“We’re excited at the opportunity to enhance the viewer experience by debuting ‘Speed Cam’ on an MLB Network Showcase production,” said Chris Pfeiffer, MLB Network’s Sr. Coordinating Producer of Remote Events, including Sunday’s telecast. “By using this advanced technology, we’ll be able to show just how fast the game moves, and it’s always advantageous to have another camera angle at our disposal for key moments during the game.”

It certainly was advantageous at some points here. We’ll see what the future holds for Speed Cam, but it seems to have worked out pretty well for this game.

[Ian Casselberry on Clippit; top photo of the camera installed at the park provided by MLB Network]