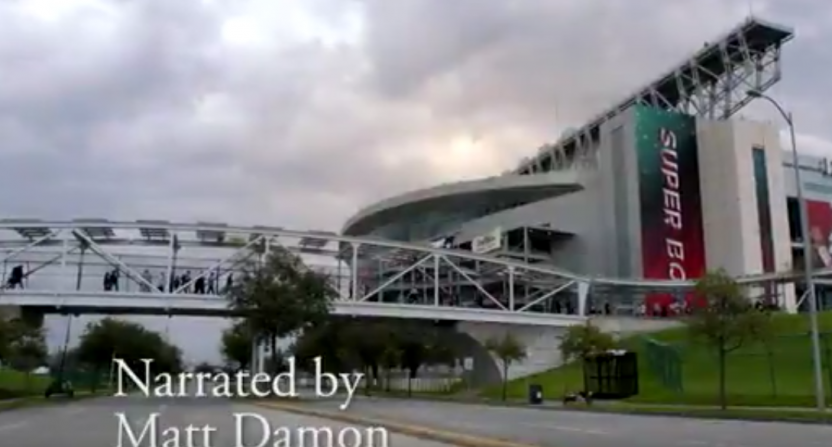 Thanks to the omnipresence of smartphones, there are plenty of people generating content of them, their friends and their families watching sporting events. Many media organizations have used that content in one way or another, showing off particularly memorable individual celebrations or moments of dismay, but the NFL’s original content group has done something a bit different. They’ve curated reactions throughout Super Bowl LI from both Atlanta Falcons and New England Patriots fans, intercut those with actual game highlights, and turned the whole thing into a snazzy under-three-minute video package. The piece, narrated by Matt Damon, focuses on how sports can provide shared moments:

Emotions felt during the @SuperBowl were incredible.

Relive #SB51 through the eyes of the fans, told by Matt Damon. https://t.co/bV7qAvbFUC

There are several things done well here. For one thing, the footage chosen is of a good quality; there are a few lower-quality videos picked because they illustrate great reactions, but the majority of the reaction shots were filmed very well, which helps make it less jarring when there’s a cut to the professionally-filmed highlights and on-field action. It was smart to cover both Falcons and Patriots fans, especially in a game like this with such emotional arcs for both, and deciding to show reactions to the whole game rather than just the comeback was an excellent call, really giving a sense of the overall picture and how things changed for fans throughout the night.

Damon’s narration helps, too, adding a big-event feel to the clip. And the chosen highlights are selected well, especially the close-up shots of players that are a little different from the standard overhead views of these plays we’ve already seen many times. There’s a nice mix of fans reacting, from young to old, from reasonably stoic to over-the-top passionate, and from those watching in the stadium to those at watch parties to those in their own homes. This piece is also about the perfect length, longer than a standard game highlights package (as it’s combining highlights, reactions and narration), but it doesn’t drag on, important for an event that’s still fairly fresh in the memory. Overall, this is a cool production by the NFL, and it helps illustrate some of the potential creative uses out there for fan-generated content.