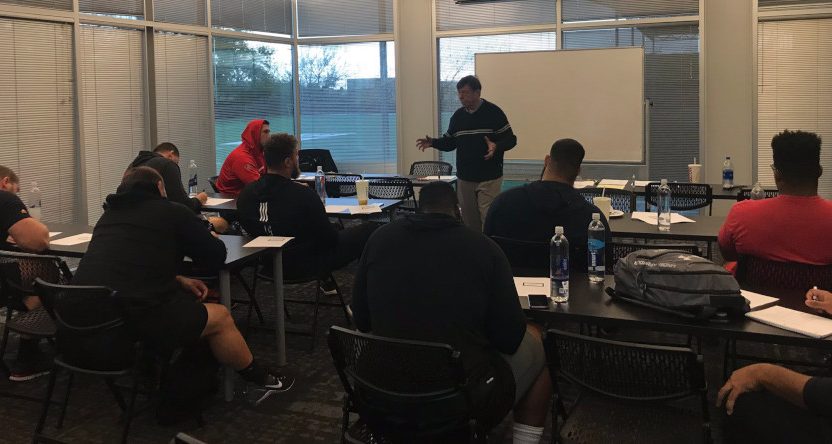 NFL Network analyst Charley Casserly just keeps digging himself in further. Casserly’s remarks on NFLN earlier this week about receiving “the worst comments I ever got on a highly-rated quarterback” from anonymous NFL executives on Oklahoma quarterback Kyler Murray were ripped by everyone from Mike Florio to Lincoln Riley, but Casserly decided to defend them further in an interview Wednesday with ESPN New York’s The Michael Kay Show. And there, he uttered a false claim that Murray wasn’t trained for his interviews, and also revealed a conflict of interest in the process, as Florio writes:

Casserly has a conflict of interest.

He has leveraged his experience as a General Manager and/or his platform on NFL Network into a side business. The side business consists of preparing prospects for Scouting Combine interviews.

During a Wednesday appearance on ESPN New York’s Michael Kay Show, Casserly said of Murray, “Clearly this guy was not trained for the interview. Just listening to it. I train players. I train over 100 players a year for Combine interviews. This guy wasn’t trained.”

Casserly wasn’t asked to clarify whether he actually saw or heard a recording of one specific Combine interview involving Kyler Murray, but the words “just listening to it” suggest that at least one of the teams gave Casserly access to the tape.

The bigger issue comes from Casserly training players for Combine interviews. He apparently has been doing it for several years with prospects who train at the EXOS facility.

Yeah, Casserly would know that all right if he trains “over 100 players a year” for Combine interviews. But “this guy was never trained for the interview” is factually incorrect, as Florio notes that as per a source, Murray received interview preparation from both Riley and from former Redskins’ quarterback and coach (and now XFL coach and GM) Jim Zorn. And it’s a real bad look for Casserly to be trashing the interview preparation of guys he didn’t specifically train, especially considering that his initial NFL Network remarks on this didn’t come with any sort of disclaimer about his involvement in training other players for interviews. But he’s seemingly been doing that for quite a while with EXOS Sports. Here’s what Sports Business Journal‘s Liz Mullen wrote about him and that role in December 2016:

Charley Casserly’s top advice for young football players going into interviews for a job with an NFL club is easy to remember.
“I tell them, ‘Absolutely never lie,’” Casserly said. “Because, No. 1, it’s gonna come back to haunt you, and No. 2, they are probably going to know the answer to the question when they ask you anyway.”

For the second year in a row, Casserly, a former general manager who is now an NFL Network broadcaster, has been hired by EXOS to help about 100 draft prospects it trains for the NFL combine. While EXOS has speed and strength coaches for the combine’s physical workouts, Casserly has been hired for the mental tests that NFL prospects must pass, interviews with NFL club personnel.

“We have had people fill that role, usually multiple people fill that role, that Charley is uniquely qualified to capture by himself,” said Mark Verstegen, EXOS’ president and founder. “To have Charley be a mentor with his perspective about what it takes to be successful as a person and as a player in the NFL is invaluable.”

Casserly appears to still be in that role, as EXOS’ Trent Wilfinger posted a photo on Twitter last month of Casserly speaking to their prospects:

It’s aways great to have @CharleyCasserly in to talk to our Combine guys. #EXOS #Combine2019 pic.twitter.com/MWMT5K5nO6

Look, Casserly can criticize a player all he wants; he’s an analyst, paid for his opinion. But it would behoove him to reveal that he’s trained other players in this current draft class, especially if some of those guys might be in competition with Murray for high draft slots. That gives him a bias, whether he acts on it or not. It would also help if he revealed more information about what’s behind the anonymous criticisms of Murray he’s dropping, as plenty of teams have potential motivation to dump on Murray (either hoping he falls to them, or maybe even that they can trade down and still get him) even if they actually like him.

No one’s expecting Casserly to divulge his exact sources, but his comments of just hearing this from “more than two” teams (out of the 10 that talked to Murray) are weak. And if he did in fact manage to listen to a tape here and come to his own conclusion that Murray’s interview wasn’t good, that’s a better criticism than “An anonymous scout said it was bad!”, but that should have been more explicitly spelled out as well.

There’s so much garbage flying around with the NFL draft, with the majority of it attributed to “team executives” and no context provided on what biases they might have. Casserly added to that with this report on Murray, especially considering that he didn’t reveal his own potential bias. And yes, it’s not that he has been hiding his EXOS work; the SBJ story indicates that. But the average viewer isn’t aware of his connection there, so it should be revealed.

It’s understandable why Casserly is employed to give prospects some interview training. His experience as a GM and executive and his experience in the sports media should theoretically give him a good understanding of what teams are looking for in these interviews. But if he’s going to do that while working for NFL Network and offering analysis as well, he and the network should at the very least be up front about that, disclosing which prospects he’s trained. Even just an “interview coach for EXOS” next to the “NFL Network analyst” on Casserly’s bio when he comes on screen would go a long way. Not disclosing that when it’s relevant (especially in the case of specific critiques of players’ interviews) is a bad look for both Casserly and NFLN.