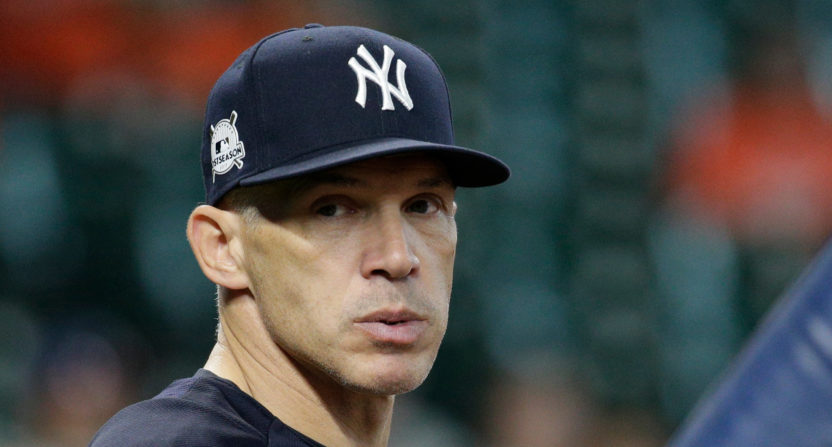 Three months after being fired unexpectedly from his job managing the New York Yankees, Joe Girardi has found a new job.

MLB Network announced Wednesday that it has hired the former Manager of the Year as a studio analyst. Per Michael McCarthy of The Sporting News, who first reported the news, Girardi will debut Wednesday on MLB Tonight, alongside Mike Lowell, Bill Ripken and Greg Amsinger.

Girardi immediately becomes one the highest-profile personalities in an MLB Network lineup that also includes big names like Pedro Martinez, Jim Thome and John Smoltz, as well as longtime analysts such as Harold Reynolds and Al Leiter.

Before managing the Yankees, Girardi racked up some broadcasting experience, serving as color commentator for the YES Network’s Yankees telecasts in 2004 and 2007 (with stints as Yankees bench coach and Marlins manager in between) and also working games for Fox during the 2006 World Series and the 2007 regular season.

Upon being fired by the Yankees after 10 seasons at the helm, Girardi told reporters he would pursue a broadcasting gig, likely at the national level given that a return to YES would be “kind of strange.” MLB Network figures to be a good fit for Girardi, as its Secaucus, New Jersey home base means he can remain in the New York area, where he lives with his wife and kids. On a conference call Wednesday, Girardi said he “had discussions” with other networks but that he felt MLB Network was the best match for him, citing the fact that “it’s baseball, and it’s baseball only.”

In a sense, Girardi’s return to TV completes a three-way trade between MLB Network, ESPN and the Yankees. First, the Yankees hired Aaron Boone away from ESPN to be their new manager. Then ESPN poached Matt Vasgersian from MLB Network (and Fox), to call its Sunday Night Baseball package alongside Jessica Mendoza and fellow newcomer Alex Rodriguez. Finally, MLB Network brought about Girardi, who had of course been deposed by the Yankees.