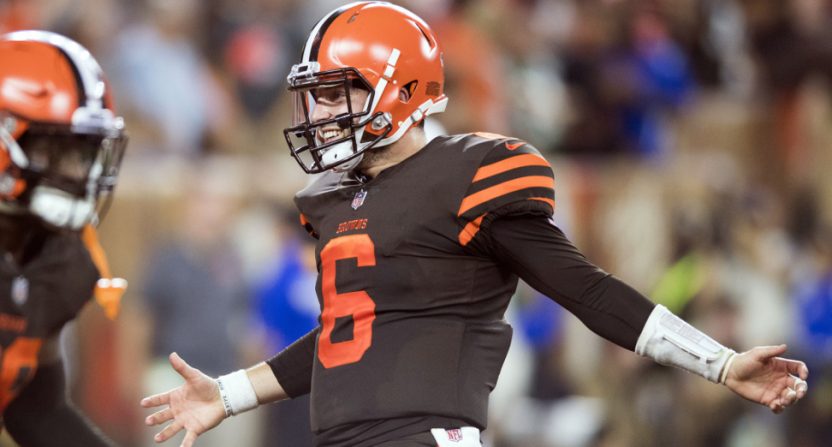 Baker Mayfield’s second-half stardom Thursday boosted not just the Cleveland Browns, but also NFL Network. Mayfield entered the game late in the first half after ineffective starter Tyrod Taylor suffered a concussion, and he completed 17 of 23 passes for 201 yards and caught a two-point conversion pass en route to Cleveland’s 21-17 comeback win over the New York Jets, the Browns’ first win since Christmas Eve of 2016. His showing got a lot of people to tune in and stay tuned in, and it marked NFL Network’s best ratings for a Thursday night game in almost three years:

While many NFL packages have seen year-over-year ratings growth so far in 2018, the Thursday night window has had its struggles. The opening NFL Kickoff Game (Falcons-Eagles, which aired on NBC, and is not part of the Thursday Night Football package) was the lowest-rated version season opener since 2008, with a weather delay contributing there, and last week’s TNF debut on NFLN (Ravens-Bengals) was down 13 percent year over year (from 2017’s Texans-Bengals), averaging 7.02 million viewers and a 4.2 household rating. So this was a significant jump, and one that suggests TNF may be able to follow some of the year-over-year improvement seen by other packages when it has compelling matchups.

And, yes, in many circumstances, Jets-Browns wouldn’t seem like a compelling matchup for those who aren’t fans of either team. But there were some intriguing storylines here for neutral viewers from the start, from the Jets’ own highly-touted rookie quarterback (Sam Darnold) to the Browns’ quest for their first win since 2016 (and the need to unlock those victory fridges). The appeal for neutrals probably increased once Mayfield came in and got social media buzzing with how well he was playing.

Also, it should be noted that many networks’ new fall TV programming hasn’t fully begun yet, so there was perhaps less competition for eyeballs elsewhere. That wouldn’t affect the year-over-year numbers much (as it was also the case last year), but it’s something to keep in mind in terms of how these ratings look going forward. The NFL’s still going to dominate Thursday nights, even for games only on NFLN and regardless of how its games do year over year, but come next week, some of us will be watching The Good Place instead.

But this was certainly an impressive ratings win for the NFL and NFLN, and they’ll be very happy to see the first year-over-year growth on a Thursday this season. Now, they just need some improvement over on Monday nights…