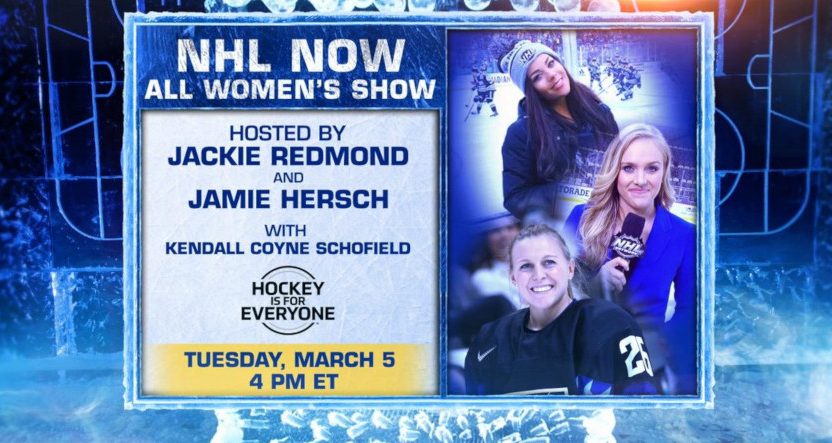 For the second straight year, NHL Network is doing an all-female edition of their daily news show NHL Now. This year’s edition will air from 4 to 6 p.m. Eastern Tuesday, hosted by Jamie Hersch and Jackie Redmond (who were both involved last year), and they’ll be joined by new NHL Network analyst Kendall Coyne Schofield. All the guests on the show will be women as well; here’s a list of who they’ve booked.

Hersch has been doing some interviews ahead of this, and she told Randy Johnson of The Minneapolis Star-Tribune that this is just another way to show off the many insightful women in the hockey world:

“It’s going to be great. We actually did this last year, and it was fantastic. The biggest thing I like to tell people is that it really wasn’t all that different from a normal ”NHL Now.” The only difference is we just all just happened to be women talking about hockey on the show. To have that just be a normal occurrence, a normal idea is really special to prove that it isn’t that strange for women to know hockey, to analyze hockey and talk about hockey. That was a great, successful show, and it was really well-received by everyone involved.

We’re going to do it again this year, and we’re really excited to have Kendall Coyne join us as an analyst. A lot of the correspondents who will join us are regular correspondents on the show — Caley Chelios for the Lightning, Lauren Gardner for the Avalanche and Lyndsay Rowley for the Predators. Again, they just happened to be women, and it worked out that they could join us.”

Having Coyne Schofield involved is interesting as well, considering the buzz she’s received lately for shining in the All-Star skills showcase and then appearing as a NBC guest analyst. That stint saw some cringeworthy overexplanation from Pierre McGuire, but Coyne Schofield handled it well, saying she understood why people were upset but she also wasn’t too bothered considering that McGuire is a long-time friend. She’s done well on the broadcasting side so far, too, including in her debut on NHLN’s NHL Tonight Monday, where she talked about the equipment challenges she faced in that All-Star fastest skater competition and how she felt mentally going into it:

"When the moment calls, you have to perform." – @KendallCoyne

The remarks at the end there are particularly notable, with Coyne Schofield saying “The weight I felt on my shoulders as a woman in that situation, I knew there was no messing up, there was no falling, there was no stumbling, there was no do-over. You have to have a clean skate, prove to the world that women belong and that we can skate just like the men.” Well, she definitely did that, and many of the men’s players were excited about her showing, which Hersch told Forbes contributor Carol Schram was great to see:

“It was awesome,” said Hersch of Coyne Schofield’s All-Star performance, which set tongues wagging all around the hockey world. “I think it’s just as important for men to be involved in promoting women’s hockey, so hearing Connor McDavid sing her praises, hearing Auston Matthews — some of the biggest stars on the men’s side of the game talking about how amazing she was in the competition — that was just a real galvanizing force to bring the spotlight on women’s hockey and show that the gap between men and women is shrinking.”

There are more and more women doing important work on the broadcasting and business sides of hockey as well, with many of them involved in Tuesday’s NHL Now broadcast. But as Hersch mentioned to Johnson, it’s also notable that this isn’t a one-off, and that this broadcast features several regular NHL Network hosts and correspondents. The all-female broadcast is a great way to emphasize that and get some more attention for it, but the key takeaway may indeed be Hersch’s comments that this proves “it isn’t that strange for women to know hockey, to analyze hockey and talk about hockey.”