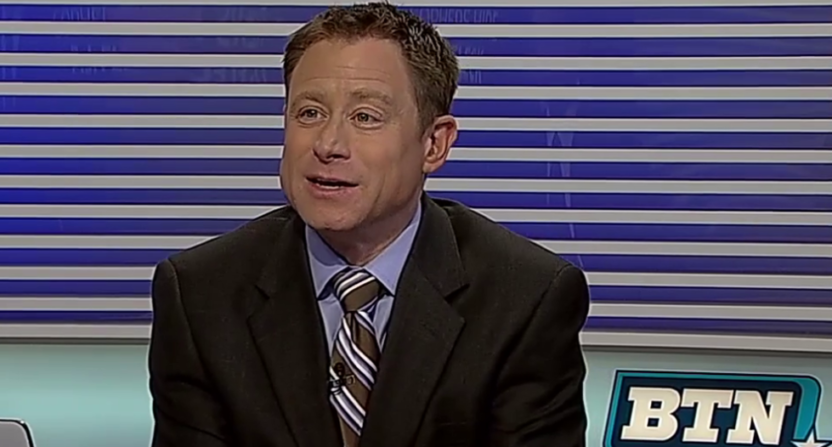 Dave Revsine has been a highly-recognizable face in the sports media for decades, working at local stations in Texas and Illinois before joining ESPN in 1996, then heading to Big Ten Network in 2007 as the first-ever voice on the network, their lead studio host, and a play-by-play announcer at times.

But Revsine hasn’t been on the BTN airwaves since January 13, and he explained in a post on the network’s website Wednesday that his absence is because his face is currently partly paralyzed thanks to a battle with Bell’s palsy:

The routine is the same every morning. I wake up, plod into the bathroom, look in the mirror, and try desperately to do something the average person does roughly 29,000 times per day. I try to blink. And every morning for the last 10 days, the result has been exactly the same. No matter how hard I try, I can’t do it.

Actually, that’s only half-accurate. I can blink my right eye fine – pretty well if I do say so myself. I can blink it to the beat of show tunes and rock anthems – even throw in a little Morse Code for good measure. Yeah, the right eye is quite impressive.

Revsine wrote that this started when he attended a hockey game with his family Jan. 12, and continued when he drove to East Lansing for the studio show Jan. 13. He said his producers helped him through that show, and he’s working on recovering, but there’s an uncertain timetable, which is frustrating for him:

Somehow, I made it through the show on Saturday. Some outstanding producing kept the camera from focusing on my malady. I drove back to Chicago, saw a doctor who confirmed my diagnosis, and began the process of trying to get better.

The issue, unfortunately, is that process involves sitting around doing nothing. Bell’s Palsy can take weeks to run its course. It can also take months. There’s no real rhyme or reason to which cases resolve the quickest. To say this is not consistent with my personality would be an understatement. I’m not good at doing nothing. I love my work covering the Big Ten, and this is one of my favorite times of the year. From calling games to hosting studio, I’ve had a front row seat to one of my greatest passions for the last ten years.

Other announcers have battled Bell’s palsy before, including famed WWE voice Jim Ross. Ross has suffered three Bell’s palsy attacks over his career, and told ESPN’s Tim Fiorvanti last fall that it’s sometimes been a challenge to call matches thanks to the disease. He said his return to the booth after his second attack in 1998 was particularly nerve-wracking:

“I was worried about my look. The second bout of Bell’s palsy was pretty aggressive and I just knew that my broadcast run was over,” said Ross. “I really felt that. But I know part of that was fed through the paranoia of the Bell’s palsy. Upon studying Bell’s palsy, you find a couple of things out. There’s no known cause, and there’s no known cure. It’s so unpredictable.”

… I just thought how I looked, how I sounded with a little bit of a speech impediment because of the Bell’s palsy.

“I was going through a tough time — I was producing announce talent and I was happy to do it. But I really believed that WrestleMania was my last one, and I appreciated the fact that Vince decided to go with me in the main event because he knew that we’d signed two potentially all-time greats,” said Ross. “I thought that would be my swan song, but we talked through it, the match was good, the fans were glad to see me back, so we started up a little run there, but it was very challenging.”

The cause of Bell’s palsy is unknown, but it hits about 1.5 per cent of the population at some point in their life. Most cases improve with time, but that time can range from weeks to months to years, and it never gets better for some.

However, Revsine has stayed upbeat here, even writing that while this is “an incredibly frustrating and powerless feeling,” “in the grand scheme of things, this is truly not that big a deal.” And he said that “though there are a few sounds which are still a bit of a challenge, I’m hopeful I might be able to return in some sort of capacity soon.” So BTN viewers may see him before too long. Until then, here’s wishing him all the best as he battles this illness.