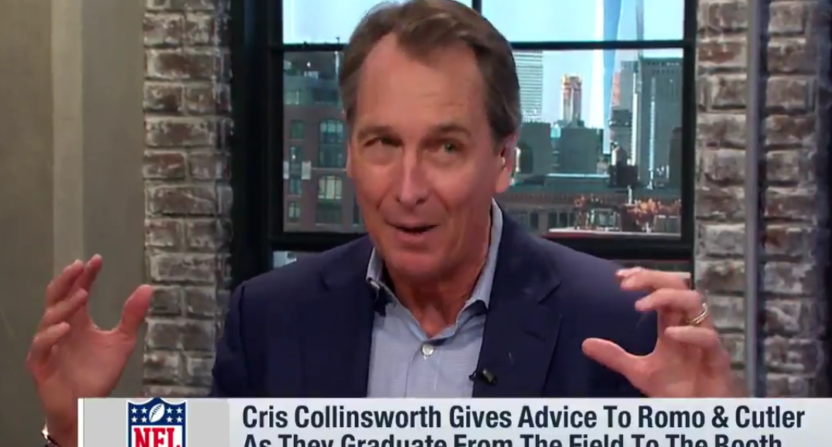 There’s been plenty of discussion out there of the trials Tony Romo and Jay Cutler will face in jumping straight from playing to high-level game analyst jobs, with Boomer Esiason calling it “a trial by fire” and Romo himself admitting “I know I’ll probably stink for a while.” Someone who knows what they’re in for is NBC and Showtime analyst Cris Collinsworth, who had some good advice for the duo on NFL Network’s Good Morning Football Tuesday. Collinsworth talked about how vital it is to be honest rather than modify analysis based on their relationships with the subject, and also discussed how they shouldn’t take Twitter criticism too seriously:

Here is @CollinsworthPFF with some advice for @tonyromo and Jay Cutler as they move from the field to the broadcast booth #GMFB pic.twitter.com/afjyaiVPG9

This starts with co-host Kyle Brandt reading a previous Collinsworth quote (from a 2015 episode of HBO’s Real Sports), “The hardest thing in broadcasting is you have to be critical of people you really like, and you have to say really nice things about people you really don’t like. I see some people I watch, and they’re taking care of their friends. Honesty is the reason we get paid.” Brandt then asks “So, how do you handle that personally? And then you look at somebody like Cutler and Romo, who have all these friends and all these enemies; what’s your advice to them?” Collinsworth responds “Get a dog,” cracking the panel up.

Collinsworth then goes on, saying “Honestly, it’s a tough business. Probably the number-one question that I get asked in every single city I go into is ‘Why do you hate…’ whoever their favorite team is. The Eagles really think I hate the Eagles. The Cowboys really think I hate the Cowboys. …The Bengals fans think I hate the Bengals! I’m a traitor, I’m a total traitor. But you know, and you guys do it here, you’ve just got to be honest. I’m a relatively nice guy, I never say anything controversial to my family or friends, hardly ever. But if you’re going to pay me to actually hear what I think, okay, then you’re going to hear what I think.”

He then went on to talk about how opinions need to be researched as well as honest.

Collinsworth made a valuable point too that much of the criticism comes from fans of whatever team winds up losing.

“To me, it’s always ‘To the victor goes the spoils,’ because at the end of the day, if you’re winning, then I’m probably saying really good things about you. So people begin to think ‘You’re biased, you love that team.'”

He then transitioned into a discussion of Twitter criticism.

“My kids introduced me to Twitter, I had no idea. …They said ‘Okay, go on Twitter,’ so I signed up and I’ve got like four people, and they say something to me and I answer them back, I thought it was like a text kind of thing. And my kids are like, “‘Oh, Dad. You don’t answer them back.’ So, after the very first game that I was on Twitter, I said, ‘Wow, Al and I did pretty well here. I thought that game was pretty good. I think I’ll go on Twitter and let people tell me how well I did.’ Oh my god, I mean, they were asking me to do things that aren’t physically possible! It’s not possible!”

Brandt chimes in with “Like, ‘I can’t kiss my own butt!'” and Collinsworth responds “Well, if it were only that bad…”

Co-host Peter Schrager then asks Collinsworth what Twitter advice he’d give Romo and Cutler, and Collinsworth responds “Keep your head low, baby. You just have to accept it for what it is. And sometimes, you know, when Roger Goodell goes out before the draft and gets booed, he should have me go out first! I should be like his warmup act. Because every fan is totally convinced I hate their team. You just sort of accept it. Every job has something great; I get to come hang out with you guys, this is cool, I like doing this, it’s fun. But the downside of the job is if you’re really doing it right, if you’re earning your paycheck, you should be dead-cold honest with what your feelings are.”

That’s some pretty good advice from Collinsworth on both fronts. Honesty is crucial for broadcasters, and especially for analysts, and there will be lots of criticism. Both Romo and Cutler are used to dealing with that as high-profile quarterbacks, though (one of the few areas where the proliferation of quarterbacks to analysts has some logic to it), and both have been facing criticism even before calling a game, with some questioning if Romo’s being elevated too fast and others (anonymous and named) lining up to bash Cutler as a broadcaster based on perceptions of him as a player. Hopefully they’ll be able to brush unnecessary criticism aside and do their jobs. And if they provide the informed honesty Collinsworth talks about here, they may do those jobs well.