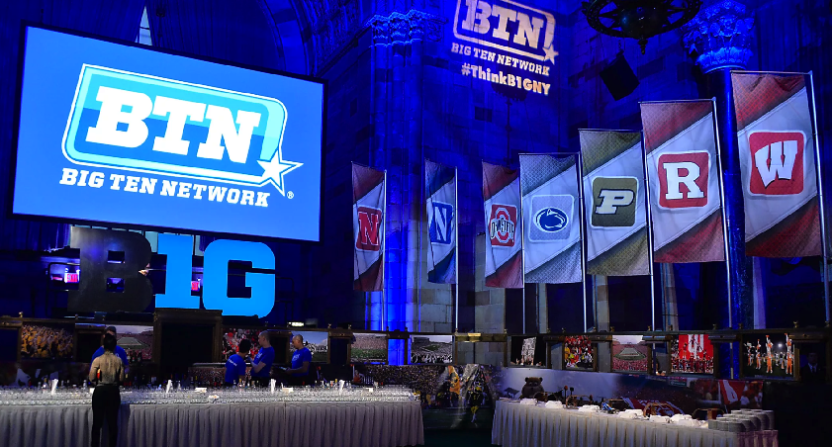 Big Ten Network has been an enormous success for the conference and the envy of other college football leagues throughout the country who want to emulate its prosperity and the significant revenues the channel has generated. The SEC Network and Pac-12 Networks have launched, and the ACC Network is almost ready to go, but they’re following a path laid out by the Big Ten.

Approaching its 10-year anniversary, BTN is currently in 60 million households and generating up to $15 million for each of the Big Ten’s member schools.

But that success hardly occurred overnight. Seeking to create better TV rights deals and national exposure for the conference, Big Ten commissioner Jim Delany had many battles with cable and satellite providers in an effort to get BTN distributed on systems around the country.

The Big Ten needed an established partner who could help distribute the network across various providers or utilize households and markets that it already controlled. As detailed by SportsBusiness Journal’s Michael Smith and John Ourand, Delany and the consultants he hired zeroed in on Comcast as a potential partner because of the foothold it had throughout the Big Ten’s territory in the Midwest.

The Big Ten talked to Comcast for six months about partnering up, but the cable conglomerate wouldn’t agree to any sort of venture. Frustrated with Comcast’s lack of commitment, Delany moved on to Fox as a potential partner.

“Comcast blew it,” Kevin O’Malley told SBJ. O’Malley was someone with whom Delany consulted for his experience as a former CBS and Turner executive.

“They were sitting on all of this cash. They were fat and happy, but they just didn’t treat Jim like he had something of importance. Jim would walk out of those meetings with steam coming out of his ears.”

As it turned out, Fox was a better partner for BTN anyway. The company had experience launching channels such as National Geographic and owned DirecTV, providing a major chunk of households that could carry Big Ten Network. Having DirecTV as a distributor gave BTN leverage in discussions with cable providers.

Comcast eventually added Big Ten Network to its lineup in 2008, but could have had a much larger stake of what’s become an impressive success story. Ten years later, it looks like a regrettable mistake and a notable misstep for the cable giant. (But maybe Comcast was apprehensive after partnering with CSTV on “The mtn.,” the MountainWest Sports Network, in 2006. That didn’t go so well.)

However, that was only one part of a long process of finding distribution, convincing skeptics and paving entirely new territory for the Big Ten Network, as SportsBusiness Journal details. It’s definitely worth a read.