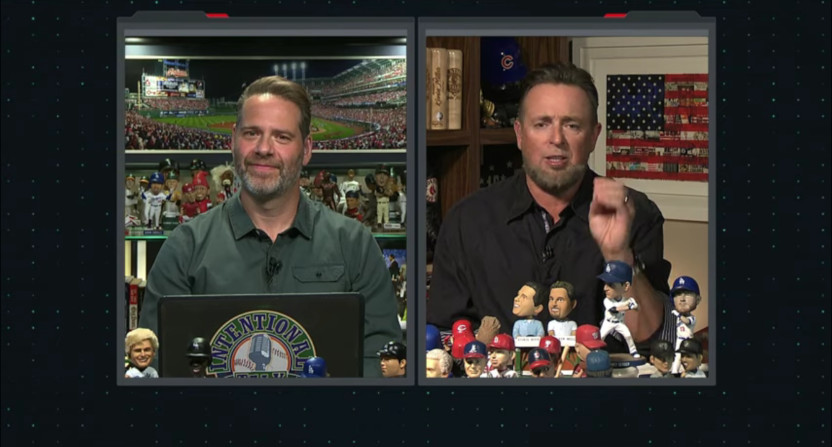 After 10 years co-hosting Intentional Talk with Kevin Millar on MLB Network, Chris Rose is out at the network, with his contract not being renewed. Rose revealed that on-air Friday, saying it was not his choice and attributing it to COVID-19 impacts. He also spoke about the great times he’d had there, especially in working with long-time friend Millar (Rose told AA last year “We’re friends, and kind of what you see when you turn on the TV is what you get, with the two of us rolling our eyes at each other”).  And Millar (who will continue with MLBN and Intentional Talk) delivered a thoughtful tribute to Rose. Here’s Rose’s tweet on this:

So, some career news. Sad to say, my run has ended at @MLBNetwork after 10 amazing years (my man @KMillar15 is staying on with IT). I’ll let these two idiots take it over from here. ?? Please watch our final 3 @IntentionalTalk shows Dec 21, 22 & 23rd. https://t.co/x28gkyLueS

And here’s the full on-air segment on this from Friday’s Intentional Talk, via MLB Network on YouTube:

Rose starts this by saying “Unfortunately, at the end of December, I will not be returning to Intentional Talk, and I will not be continuing on with the network. Now, this is not my call. Unfortunately, COVID is really something that has steeped into a lot of businesses in this country, and baseball’s not immune. If you have been paying attention to what’s going on behind the scenes, there are a lot of teams that have let go outstanding PR people, scouts, development people behind the scenes. It has affected the business of baseball, and it has started to affect, unfortunately, the business of MLB Network.”

“My contract was up at the end of December, it will not be renewed. I found this out about three and a half weeks ago. And people have asked me, including my good friend Kevin, who I consider like a brother, how I’m feeling. I’m not angry at MLB, I’m not angry at MLB Network. I’m sad that I will not be able to do this show any more.”

“It crushes my heart, because I love doing this show and we are so blessed to be able to come into your home and do this sort of stuff. And I get to do it with an amazing guy like Kevin who takes truth serum before every show and gets to provide his energy and his entertainment unlike people I have seen before. And I love doing it with all the amazing people behind the scenes.”

“Here’s the good news: even though I’m a little emotional, it’s not a sad day. If you have a 10-year run in a business like this, you should be screaming at the top of your lungs how special it is. And I am so appreciative of everything that the network has done and given me and my family, and, Kevin, given us the opportunity to do something special.”

After a discussion of their plans for their final shows Dec. 21-23 (which will include looks back at Intentional Talk history as well as coverage of any new baseball developments), Rose said he’s not leaving on bad terms.

“Once again, I want to reiterate, I’m too old to be upset with people, I’m not. Don’t think that, don’t think I’m leaving on bad terms. Am I pissed off I won’t get to do the show? Absolutely. Is it unsettling that I have to go find something else, in addition to my work elsewhere? Yes. But based on what has happened in this world since March, where families have lost loved ones, where people can’t pay their mortgage, where they don’t know where their next meal is coming from, I’m in great shape and I am thankful for the opportunity. So I want to thank you, Kevin, and the amazing people at MLB Network, and most of all, the people at home who made the decision to welcome us into your homes. So thank you very much, I do appreciate it.”

And Millar responded with a detailed, emotional tribute.

“Yeah, Rosey, well, I’m just going to tell you something, and it’s something from when you told me that you were going to announce this. There’s a lot of people that owe you, and I’m one of them. And, well, I didn’t want to do this [getting emotional], but I wanted to say thanks for everything. Because I was just a baseball player, and man, I didn’t know anything about television.”

“I looked up to you, I loved the Best Damn Sports Show, I came on that show, and, you know, I remember sitting in this room by myself, going ‘I thought we were going to be fired three months into it’ [Intentional Talk], we were looking at each other sideways, and I was telling [then-MLB Network execs] John Entz and Tony Pettiti, ‘I don’t even know what I’m doing.'”

“You’ve raised a lot of people, and I’m one of them, and I truly mean that. I’ve never been around anybody that works as hard as you. And from every producer behind the scenes that you’ve helped, [Mark] Grillo, and Anthony Jimenez, and Dan Komyati, not to name names, and John Barnes. From the beginning of things, you’re an ultimate pro, Chris, and the smartest guy I’ve ever been around.”

“This is something that wasn’t going to be an easy day, and it’s still not easy. I love you as a brother, as you know. And I know you’re going to be on top of the mountain either way because you’re a badass at what you do, and I appreciate it.”

Rose then finished this off with some thoughts on what working with Millar has meant to him.

“We’ve been friends for 17 years, when you used to come on regularly on Best Damn. We’re basically the same age. Your mom lived 10 minutes from me. We see each other regularly in the offseason. We’ve been around each other when our kids have succeeded and failed, and we’ve been there for each other. And the fortunate thing, I think, that the viewers have received, is that we’ve plopped the camera down on a friendship for 10 years.”

“That doesn’t happen in television. A lot of people become friends once they start working together. We just had a friendship, and you all just got to see it. This is it, this is how we talk to each other, and I hope that everyone got something out of it when they got to see it. We’re going to have three more killer shows, because we have the best producers around, we’re going to have fun, our families will drop by, we’re going to drop some tears, we’ll laugh a hell of a lot, and we’ll have a good time.”