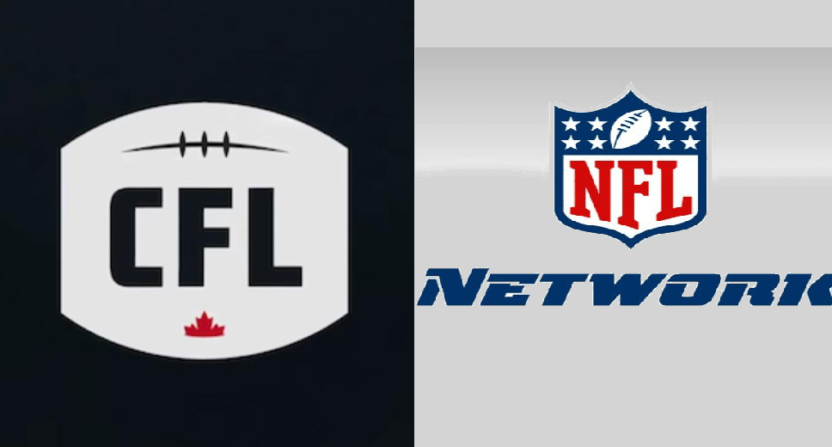 New CFL commissioner Randy Ambrosie made international headlines Friday for comments to Tim Baines of The Ottawa Sun that the league could sign a deal with NFL Network following its “soon-to-expire” deal with ESPN (which is curious in its own right, as when that deal was signed in 2014, it was expected to run through 2018), and that it might move its season several weeks earlier to make that deal happen. Moving the season is one thing, and it has pros and cons (pros include that it would definitely help a U.S. TV deal regardless of who the deal’s with, and that there would likely be better weather and better attendance for late-season games and the playoffs, cons include that an earlier season would go head-to-head with the NHL playoffs and would require a shifting of the CFL offseason calendar and possibly the draft, and that the playoffs and the Grey Cup would then overlap with the MLB postseason and World Series), but proclaiming that the league could head back to NFL Network instead of ESPN for its U.S. TV deal is perhaps an even more notable comment, and not necessarily a good one.

It’s not clear when this would happen; the initial deal was said to be for five years, and Ambrosie’s comments about changing the schedule in 2019 would fit with that, but the “soon-to-expire” language suggests this may be a discussion about 2018. But the CFL has seen games aired on NFL Network before, in 2010 and 2011, but only one game was aired a week that first year. Two a week were aired in the early part of the 2011 season, but the coverage was more limited once the NFL season began. In 2012, the CFL sent games to streaming service ESPN3 and also signed a 14-game deal with NBCSN, and the ESPN/NBCSN split continued in 2013. In 2014, ESPN struck an exclusive five-year deal with the CFL to show all its games across linear and digital (ESPN3) platforms, and that’s had plenty of benefits for the league; CFL fans in the U.S. have been able to access every game through at least ESPN3 (which is available through a variety of streaming apps, but does require a cable subscription), with plenty of games shown on ESPN’s linear platforms as well. And there are benefits to the consistency there; back in the days of the ESPN/NBCSN split, fans had to regularly consult broadcasting schedules to figure out which streaming service to access games on, as the NBCSN games weren’t on ESPN3. Going back to NFL Network entirely or a NFLN/ESPN split could make that more difficult; NFL Network does have its own streaming options, but they tend not to be as solid as the BAMTech-powered ESPN3.

The big problem with a NFL Network partnership is NFLN’s limited space. They have one channel to air content on, and while that will be fine for CFL games in the summer when there’s next to nothing happening on the NFL front, it’s hard to see them ditching NFL analysis for CFL games during the season. By contrast, ESPN has four primary channels that have been used for CFL games, ESPN, ESPN2, ESPNews and ESPNU, and they throw CFL games on some of those lower ones in particular even during the fall. (Especially on Sundays, when they don’t have college football and don’t want to put their own programming up against the NFL.) And ESPN has zero limitations in terms of what they can put on ESPN3, especially when it comes to outside-produced content like the CFL (CFL feeds come from Canada’s TSN, which is 20 per cent owned by ESPN, so ESPN isn’t directly paying production costs.) And they might be even more interested in CFL rights now that they’re planning to launch an OTT subscription service with some of the content not on traditional ESPN networks.

The NFL doesn’t appear to have any sort of equivalent option to at least stream every CFL game, unless that gets rolled into a product like GamePass (which people are already complaining about in non-U.S. markets). It’s possible there could be a NFLN/ESPN3 split, but that provides less incentive for both networks to really promote the product if they have to share it, and it brings up the aforementioned confusion about where particular games are. And NFLN certainly doesn’t have more reach than ESPN or ESPN2; as per Nielsen’s August cable coverage estimates, ESPN and ESPN2 were both in over 87,000 homes, with ESPNU in 66,000, NFLN in 69,000 and ESPNews not rated. So NFLN is slightly better than ESPNU and better than ESPNews, but a drop in exposure from ESPN and ESPN2. Oh, and even if the season was moved up several weeks, it seems pretty unlikely that the CFL playoffs and the Grey Cup are going to get any sort of play on NFLN in October. But they get consistent slots on ESPN’s lesser channels and do okay there.

Of course, it’s not all about the viewers. ESPN is believed to not be paying all that much for the CFL rights, and NFLN might offer more. Other U.S. companies could conceivably get involved too, perhaps even digitally-focused ones like Facebook, Amazon and Stadium that seem to be paying to stream just about anything. And the CFL has shown growing synergy with the NFL on several fronts, from cross-border officiating training and replay discussions to joint minor football initiatives in Canada, and there could be value for both leagues in aligning further. And at the very least, it seems positive for the CFL that there are different U.S. broadcasters who might be interested in carrying its games. And that’s likely even more the case if the CFL season is moved earlier in the year, and thus overlaps with the NFL and college football less. But the league should realize that its current U.S. broadcast situation is pretty good, all things considered. And it shouldn’t jump to abandon ESPN for NFLN unless the benefits outweigh the costs.