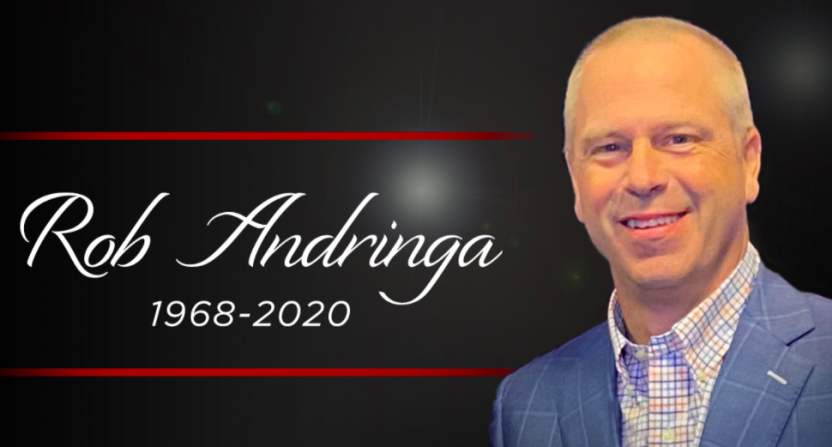 Former Wisconsin Badger hockey player Rob Andringa, who worked as a hockey analyst for the University of Wisconsin and the Big Ten Network, passed away on Friday at 51 following a battle with stage 4 colon cancer.

Born in Madison, Wisconsin, Andringa went on to play in a record 179 games for the UW men’s hockey team between 1987 and 1991, finishing seventh all-time in assists and 10th all-time in points for a defenseman. He scored the game-winning goal in two NCAA tournament games and helped lead the Badgers to the 1990 NCAA Championship. Rob was inducted into the Madison Sports Hall of Fame in 2011.

After his playing career, Andringa worked as a color analyst for Wisconsin hockey for various TV and radio organizations, starting with Wisconsin Public Television in 1996. He would later move to radio station WIBA where he partnered with play-by-play announcer Brian Posick between 2003 and 2007, where he called UW’s 2006 national championship. In 2013, he joined the Big Ten Network as a hockey analyst. All the while he remained a major force in the UW community and even inspired a sculpture on the campus dubbed “Ringo,” in honor of his nickname.

In 2017, he was diagnosed with colon cancer, though that didn’t stop him from returning to the booth to call eight UW hockey games on Fox Sports Wisconsin in 2018 alongside Posick.

“We’re not going to worry about tomorrow. We’re not going to worry about yesterday. We’re going to live in the moment,” Andringa said at the time. “That’s why doing Badger hockey was one of those things that I had in the back of my mind, like, if I could get well enough to do that again, I know that would pick up my spirits and probably give me as much medicine as any chemo pill would ever give me, to be in an element that I feel so comfortable and happy being around. We made a point, my wife and I, to go for it and to have fun doing it.”

Andringa entered hospice care in early May and his son Jack shared the news of his passing on Instagram Friday night. “If the dash between the lines is all we leave on this earth, not many compare to the story you left pops.”

Rob Andringa made me laugh. A lot. He made me think. I will miss our conversations & his smartass text messages. I will miss it all. However, I will cherish the memories. Finally, I am certain I will never meet anyone who loves family, friends & his alma mater more than Ringo.

Rob Andringa fought the fight to the end. Never felt sorry for himself. Never complained when his body cried out in pain. Never stopped uplifting others with his spirit & conviction to living the final days of his life with passion & commitment to Christi and the kids. RIP#Ringo pic.twitter.com/WgkBbMKADS

Sad day for all of us who knew and loved Rob Andringa. Rob passed away Friday after a long and inspirational battle with colon cancer. A Madison kid who lived his dream by playing hockey and baseball for the #Badgers, Rob never lost the positive attitude that made him special. https://t.co/h3yDcEDYa3

Andringa is survived by his wife Christi and three children, Jack, Carson, and Dara.